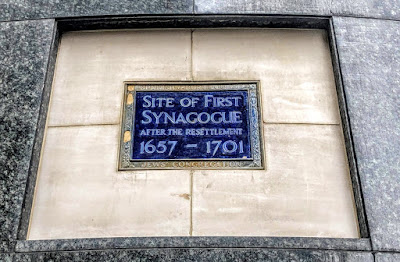 The ceramic plaque on Cunard House marks the site of Creechurch Lane Synagogue, the first synagogue founded in England since the expulsion of Jews in 1290 (Photograph Patrick Comerford, 2020)

Creechurch Lane is a small street in the Aldgate Ward of the City of London. It is just 120 metres (400 feet) long, and runs south from the junction of Bevis Marks and Duke’s Place to Leadenhall Street.

I walked along this small street close to Liverpool Street Station this week [4 March 2020] in search of a ceramic plaque on the wall of Cunard House, on the corner of Creechurch Lane and Bury Street. This plaque marks the site of Creechurch Lane Synagogue, the first synagogue founded in England following the readmission and resettlement of Jews in 1656, and the first since the expulsion of the Jews from England in 1290.

Creechurch Lane Synagogue was a Sephardic synagogue and the first Synagogue of the Spanish and Portuguese Jews’ Congregation. The actual founder of the synagogue was Antonio Fernandez Caravajal, a successful Jewish merchant of Portuguese birth. He was born ca 1590, probably at Fundão, Portugal. He left Fundão because of the persecutions of the Inquisition and moved to the Canary Islands, where he acquired much property and made commercial connections.

He seems to have moved to London around 1635, and settled in Leadenhall Street. The council of state appointed him one among the five persons who received the army contract for corn in 1649. By 1653, he owned ships trading with the East and West Indies, Brazil, and the Levant, dealing in gunpowder, wine, hides, pictures, cochineal, corn and silver, bringing £100,000 worth of silver to England each year.

At first, he attended Mass in the Spanish ambassador’s chapel, but in 1645 he was informed against for not attending church. However, the House of Lords quashed the proceedings.

When war broke out with Portugal in 1650, Carvajal’s ships were exempted from seizure, although he was nominally a Portuguese subject. He and his two sons became English subjects in 1655, and when war with Spain broke out in the following year, Oliver Cromwell made arrangements for Carvajal’s goods to be sent from the Canaries in an English ship that was flying Dutch colours.

When Menasseh Ben Israel came to England in 1655 to petition Parliament for the return of the Jews to England, Carvajal, though his own position was secured, associated himself with the petition. He was one of the three persons in whose names the first Jewish burial-ground was acquired after the Robles case had forced the Jews in England to acknowledge their faith.

Cromwell gave Carvajal the assurance of the right of Jews to remain in England. Carvajal died in London on 10 November 1659.

Meanwhile, the Sephardi community acquired a lease on a building on Creechurch Lane on 16 December 1656 and services began the following month, in January 1657. A month later, in February 1657, the community acquired a lease of land in Mile End, to the east of the City, for use as a cemetery. This was the first Jewish cemetery in England since 1290. The cemetery became known as Mile End Velho or Old Cemetery.

A second Jewish congregation may have been present in the area of Saint Helen’s in the mid-1660s, but there is little surviving information about it. 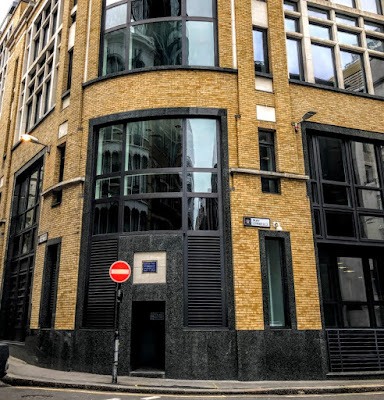 Some sources suggest Rabbi Samuel Levy may have served the congregation at first. But Rabbi Moses Athias was brought over from Hamburg as the first Haham or rabbi in 1656 and was still there in 1660. Three years later, the diarist Samuel Pepys (1633-1703) visited the synagogue on Creechurch Lane during Simchat Torah, but seems to have been totally bewildered by the boisterous celebrations he saw there.

Rabbi Moses Athias seems to have been succeeded as Haham by Rabbi Jacob Sasportas (1664-1665), the first Haham of the Sephardi Community in London.

This was a Sephardi synagogue, but until an Ashkenazi synagogue was established nearby at Duke’s Place in 1690, a large number of Ashkanazi – or Tedescos as they were referred to by the Sephardi – attended the synagogue. However, they were not allowed to hold office, to vote or to take part in the services.

Eventually this early synagogue on Creechurch Lane was succeeded by the Bevis Marks Synagogue in 1701. The building then returned to domestic use. It later became the Parish Workhouse, and remained so until 1857, when it was demolished.

The plaque on Cunard House today marks the site of this former synagogue, the first established in England since the expulsion of Jews in 1290. 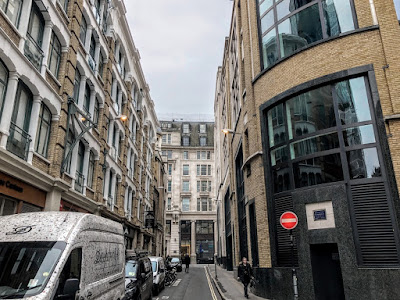