The former Quaker meeting house on High Street, Wexford, dates from 1746 and was rebuilt in 1842 (Photograph: Patrick Comerford)

For an interesting part of my life, Quakers were influential in shaping my spirituality and my Christian activism, especially my lifelong commitment to pacifism. In my early 20s, I divided my Sunday church-going between Saint Iberius’s Church in Wexford and Friends’ Meeting House in Enniscorthy.

While I was living on High Street, Wexford, in the 1970s, the street was ‘bookended’ by Rowe Street Church and the Methodist Church at one end, and the ruins of the mediaeval Saint Patrick’s Church at the other end. In between the two was Wexford’s former Quaker Meeting House, which had closed almost half a century earlier, and which dated back to the 1740s.

This former meeting house is an important part of the mid-19th century ecclesiastical heritage of Wexford and its composition gives the building architectural value.

There were Quakers in Wexford from about 1657, and the first Quaker meeting house in the town was built in 1746 on a site that had been donated to Friends in 1743 by John Deanes of Silverspring House.

However, the meeting was ‘laid down’ in the late 18th century. It seems the Methodists held meetings in the former meeting house for a time around 1795 without the consent of Quakers. In the decades that followed, the building fell into decay.

This is a detached, five-bay, double-height single-cell meeting house, built on a rectangular plan. It was ‘improved’ before 1903, producing the present composition, and a block with cloakrooms and toilets was added later.

The meeting was discontinued in 1927 after the three remaining Thompson families left Wexford. Edward McQuillan of Dunluce in Westgate, one of the last prominent Quakers in Wexford in the early 20th century, later died in 1941. Meanwehile, the meeting house on High Street was sold in 1928. It passed into private ownership and is used as a rehearsal hall for a band.

The former meeting house is set back from the street with cast-iron railings at the perimeter centred and a cast-iron gate.

The building was renovated in the mid-20th century to accommodate alternative use. There is a replacement pitched fibre-cement slate roof with ridge tiles, concrete or rendered coping at the gables and rendered chimney stacks at apexes with corbelled stepped chamfered capping. There are uPVC rainwater goods on rendered eaves, and rendered, ruled and lined walls.

The segmental-headed off-central door opening has a cut-granite threshold, and concealed dressings on cut-granite padstones. These frame the replacement timber panelled double doors with an overlight.

The introduction of these replacement fittings for the doors and windows does nothing the external appearance or integrity of the building. Nevertheless, this former Quaker meeting house remains an interesting historical site on High Street.

Before the meeting house on High Street was built, the Quakers of Wexford had already acquired a burial ground in the town in 1726. Elnathan Allen leased a site of four perches to Friends ‘for ever’ for 2 shillings a year. The site was then described as ‘near the town wall of Wexford.’

However, after only two burials, the meeting’s caretaker claimed squatter’s rights on the site. This site later became the site for the Church of the Assumption, or Bride Street Church, one of the ‘Twin Churches built in the 1850s. The site of the former Quaker burial ground is no longer visible. 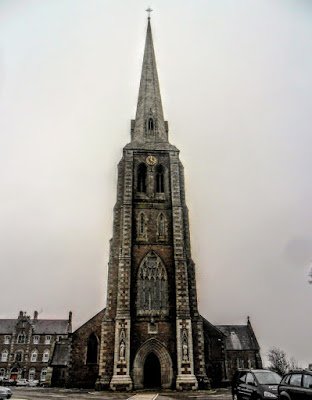