Christ Church, Gorey: a church
in Co Wexford with a unique
collection of stained glass 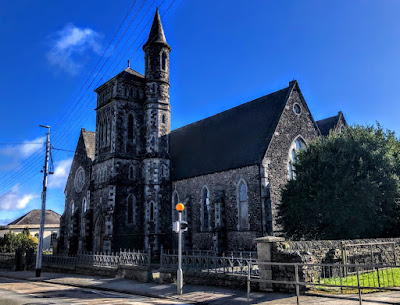 During my ‘road trip’ visit to Wexford last week, I visited a number of churches including the mediaeval ruins of Saint Mary’s Church in Wexford town, the modern Church of the Annunciation in Clonard on the outskirts of Wexford, and Christ Church, Gorey, a Church of Ireland parish church with an impressive collection of modern Irish stained-glass windows, including works by the Harry Clarke Studios and An Túr Gloine.

Christ Church Gorey was designed 1858-1861 by Joseph Welland (1798-1860), architect to the Ecclesiastical Commissioners from 1843. The church replaced an earlier church, and at the time was seen as ‘blending the Norman and English styles of architecture [in] a vague and unseemly’ manner.

Christ Church Gorey has been part the history of Gorey for 400 years, and dates back to the Revd Thomas Ram in 1610. A new bell was installed in the Market Square Church, as it was known in 1735, much to the delight of the people of Gorey.

A new church, Christ Church, was ready for use in 1819. It was a spacious building, blending the Norman and English styles. However, that church fell into disrepair in the 1850s. It was not being big enough for the area and seated 400 people, and was eventually demolished in 1858. Inside Christ Church, Gorey, facing east … the churches on this site have been part the history of Gorey for 400 years (Photograph: Patrick Comerford, 2022)

A new seven-bay, double-height church designed by Joseph Welland opened in 1861 and was consecrated in 1862. The church is built on a cruciform plan, aligned along a slightly skewed liturgically-correct axis. The rock-faced opus incertum stone work is offset by silver-grey granite dressings that show good quality workmanship and produce a sober two-tone palette.

The slender profile of the windows underpins a mediaeval Gothic theme, with the chancel defined by an elegant Trinity Window. A slender ‘candle-snuffer’ spirelet embellishes the tower and is a picturesque eye-catcher in the north Wexford landscape. 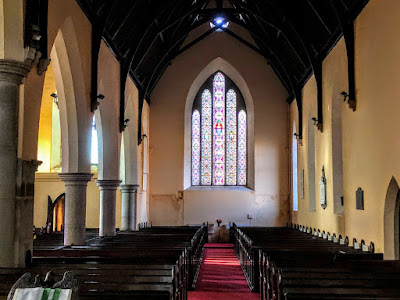 The church has been well maintained, and the form and massing survive intact with substantial parts of the original fabric, both outside and inside.

The decorative work in the church includes encaustic tiles, an exposed timber roof, a cloaked altar attributed to Charles William Harrison (1834-1903) of Dublin, timber pews, classical-style wall monuments, a Gothic-style pulpit on an octagonal plan, a Gothic-style clerk’s desk, a pointed-arch chancel arch, and brass communion rails, all adding to the artistic integrity of the building.

The Lea-Wilson RIC Memorial window in Christ Church is signed ‘J Clarke & Sons’ at the bottom left, and ‘33 Nth Frederick Street, Dublin’ at the bottom right. It depicts Gideon and though it is said to be the work of Joshua Clarke, other sources say it is the work of his son Harry Clarke.

Percival Lea-Wilson, who was a Deputy Inspector of the Royal Irish Constabulary and was murdered by Republicans outside his home in Gorey on 15 June 1920.

The inscription below reads: ‘‘To the glory of God and in honoured and loving memory of Percival Lea-Wilson DIRIC who was killed 15th June 1920. Erected by his companions and Brother Freemasons.’

The Saint Stephen window by Harry Clarke was erected in memory of Percival Lea-Wilson by his widow, Dr Marie Lea-Wilson (Photograph: Patrick Comerford, 2022)

Harry Clarke worked on the Saint Stephen window with Kathleen Quigley. On 21 December 1921, he wrote to Mrs Lea-Wilson, telling her the window would be completed by mid-January 1922 and stating: ‘The window has come out extremely well and you will be pleased to hear that I have successfully carried out your views with regard to the crest, and the coat of arms.’

The background of the window is silver grey decorated with colourful flowers and foliage, and it is bordered by white rectangles and beads of white, blue and red.

The top panels of the window show an angel in robes of magenta, ruby and gold. Her arms are outstretched and a large silver crown is suspended above Saint Stephen, the first martyr, who is portrayed in blue, purple and magenta robes. He holds a large emerald book and a martyr’s palm. His features are pale and angular and his feet are clad in leather sandals. The stones used to kill him are woven into the pattern of his robes.

In the lower panel, a child-like angel is in crimson robes. She has long flaxen hair and a headband of flowers and holds a banner with Saint Stephen’s final words, ‘Lord, lay not this sin to their charge’ (Acts 7: 60). The badge of the RIC is to the left of the angel and on her right is the Wilson family coat of arms with the motto Facta Non Verba (‘Deeds Not Words’).

The window is signed ‘Harry Clarke, Dublin 1922’ above the bottom right border. The inscription in the lower panel reads, ‘To the glory of God and in honoured and loving memory of Percival Lea-Wilson DIRIC who was killed 15th June 1920. Erected by his wife.’ 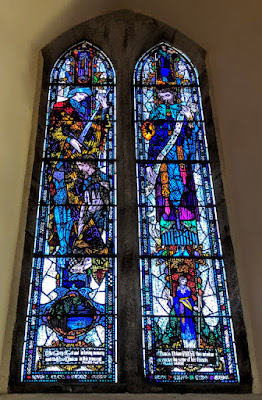 The two-light window by Harry Clarke depicting Saint Luke and Saint Martin of Tours with the Beggar (Photograph: Patrick Comerford, 2022)

The windows are long and narrow and set closely together. The background of the windows is white with streaks of silver, and the borders are decorated with abstract and floral motifs and tiny blue beads.

The top panels of the first light depict Saint Louis IX, King of France, wearing a golden crown and carrying a martyr’s palm. He wears a blue cloak and robes of purple and gold. His arms are crossed and he is surrounded by a crimson halo of light and colourful blossoms.

The main panels depict Saint Martin of Tours holding an ornate silver sword. He wears a crimson and gold cloak over a silver-grey suit of chain mail and a helmet, denoting his early career as a soldier. A ragged beggar with a sad expression kneels before him, dressed in blue and grey scraps of cloth.

Saint Martin of Tours was enlisted in the Roman army in his youth. As his regiment was approaching a town, Saint Martin took pity on a ragged beggar and cut his cloak in two, giving one half to the beggar. In this window, he is depicted at the moment he cut his cloak to clothe the beggar.

The lower panel depicts the church in Marmoutier, outside of Tours, founded by Saint in the year 372 when he became Bishop of Tours. The church inset is decorated with blossoms and foliage.

The top of the second light depicts Saint Luke in a blue cloak and robes, surrounded by colourful foliage. He holds a book and a quill as the author of Saint Luke’s Gospel and the Acts of the Apostles.

The main panels depict the bearded Saint Luke, physician and author, wearing a blue cloak decorated with floral motifs, an elaborate turquoise collar, and a long golden sash. His outer robes are blue, purple and magenta, worn over garments of jade and grey. He holds a parchment in his hands. To the left of the saint is his emblem, the bull or ox, symbolising the first story in his Gospel where Zachary makes a sacrifice in the Temple.

The lower panel shows Saint Luke in blue robes decorated with white motifs and a golden sash, holding a staff and a lily, surrounded by rich-coloured blossoms.

The inscription on the window reads, ‘To the Glory of God and in loving memory of Francis Nolan PRCSI this window and the Rose Window in this transept are erected by some of his friends. Born Feb[ruary] 22 1870, Died March 25 1922.’ 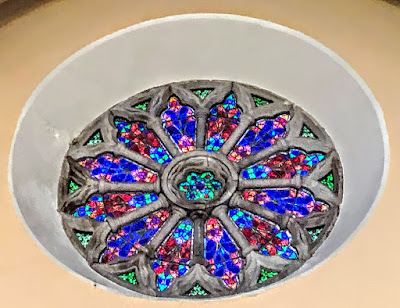 The 12-light Rose window representing the Apostles by Harry Clarke is a memorial to Dr Francis Nolan (Photograph: Patrick Comerford, 2022)

At the same time, the Revd WHT Gahan also commissioned a 12-light Rose window representing the Apostles in December 1922 as a memorial to Francis Nolan. It was designed by Harry Clarke and was made by the Clarke studios in Dublin.

The window has 12 decorative abstract panels, denoting the 12 apostles. The central panel is a decorative hexagon in green and turquoise, with buds of red, purple and lilac.

The 12 main panels alternate between lights of deep crimson decorated with blue, lilac and green, and purple and blue lights decorated with magenta, ruby and gold. The outer section is made up of 12 small panels depicting green foliage. 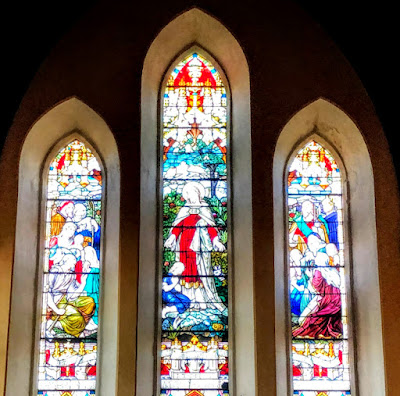 Other windows in Christ Church are by Shrigley and Hunt of Lancaster, Ethel Rhind and Catherine O’Brien of An Túr Gloine, Michael Joseph Cunningham Buckley of Youghal, and William Dowling of the Harry Clarke Studios.

The East Window is a three-light window in memory of Lucie Catherine Owen (1903) by Michael Buckley of Cox, Sons, Buckley & Co, of Youghal and London. The inscription reads: ‘Come unto me all ye that labour and are heavy laden and I will give you rest’ (see Matthew 11: 28).

Three scenes from the life of Christ in a window by Catherine O’Brien (Photograph: Patrick Comerford, 2022)

Catherine O’Brien designed the 1956 window in the north nave with three depictions: Christ in the Wilderness (top), Christ and Saint Peter walking on the water (middle) and Christ and the Disciples in the Storm (bottom). 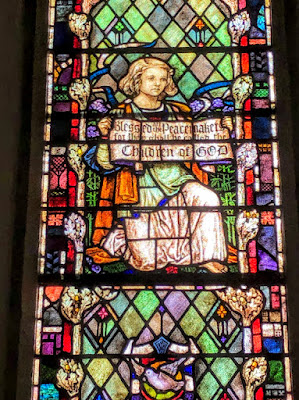 The ‘Angel of Peace’ window … is it by Catherine O’Brien or Ethel Rhind? (Photograph: Patrick Comerford, 2022)

The ‘Angel of Peace’ window (1910) in the south aisle, in memory of George Warren, is also attributed to Catherine O’Brien, although other sources say it is the work of Ethel Rhind of An Túr Gloine. 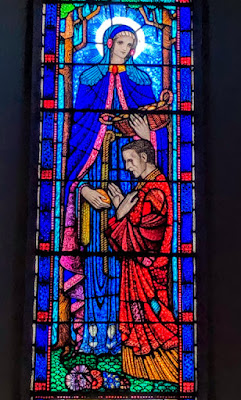 William Dowling of the Harry Clarke Studios designed the south aisle window showing Saint Brigid and the Beggar (1922), commissioned by the Warren family. 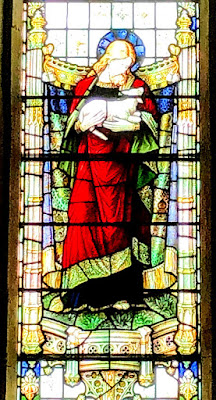 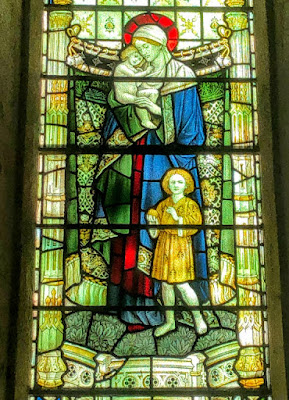 The Virgin Mary as Charity … a window in the South Transept (Photograph: Patrick Comerford, 2022)

Two windows in the South Transept were commissioned by the Ellis family and are by Shrigley and Hunt of Lancaster: the Good Shepherd (1885) and the Virgin Mary as Charity (1885). 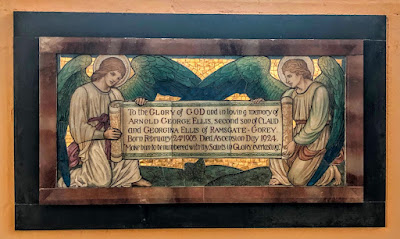 An opus sectile panel on a wall has been attributed to Ethel Rhind but appears to be the work of William Gasby (1863-1941). It shows two angels holding a scroll, and is in memory of Arnold George Ellis (1905-1924) of Ramsgate, Gorey.

Other monuments on the walls commemorate many parishioners, including monuments from the earlier churches to Colonel Lambert Theodore Walpole (1798) and Major Abraham Augustus Nunn (1805). Throughout the church there are many reminders too of the Ven William Samuel Parker, who was Rector of Gorey (1947-1986) and Archdeacon of Ferns (1971-1986), at a time when I was working with the local newspapers in Co Wexford in the 1970s.

Christ Church was renovated in 1983 and forms a self-contained group with neighbouring Christ Church Old School on Gorey’s Main Street. The church is set in landscaped grounds with cut-granite panelled piers and cast-iron double gates.

Today, Christ Church, Gorey, is open seven days a week and the Rector of Gorey is Canon Mark Hayden. 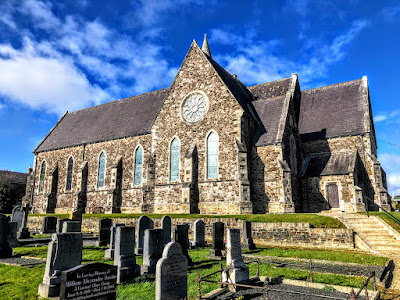