Lavender fields, fresh raspberries, and walks
in the gardens, mountains and by the beach 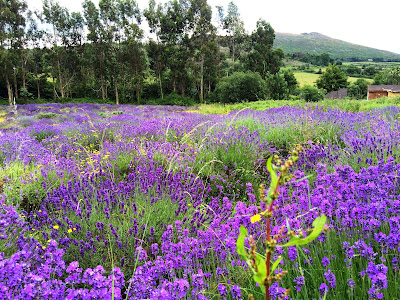 The Lavender Field, across the N11 from Avoca Handweavers in Kilmacanogue, Co Wicklow (Photograph: Patrick Comerford, 2014)

I often pass the Lavender Farm at Kilmacanogue, but I seem to continually miss the turn into the lavender field opposite Avoca Handweavers in Kilmacanogue, near Bray, Co Wicklow.

Either we have been busy watching for the turn off to Kilmacanogue on N11, or enjoying the view of the Wicklow Mountains on our way further south in Co Wicklow or Co Wexford.

This afternoon, after celebrating the Eucharist and preaching in Saint Bartholomew’s Church, Ballsbridge, this morning, two of us were on our way to lunch at Avoca in Kilmacanouge when we noticed the sign for the Lavender Field just in time.

The Lavender Farm owes its origins to Brian Cox, father of David Cox, the current Managing Director of Avoca Handweavers, and Donald Pratt, the founder of Avoca. In 1983, they had the idea to start an Irish perfume company. They started by producing a perfume named ‘Innisfree’ after the WB Yeats’s poem, The Lake Isle of Innisfree, and the Yeats estate gave the young company permission to use the name with the perfume.

Innisfree was an immediate success. In 1987 David Cox, Brian’s son, came to work with his father as the company moved to new premises in a converted dairy barn that was part of the former Jameson Whiskey family estate in Kilmacanogue. In the early 1990s, new ranges were added, with some of the fragrances sourced from lavender from their own field, across the road from their offices in Kilmacanogue. 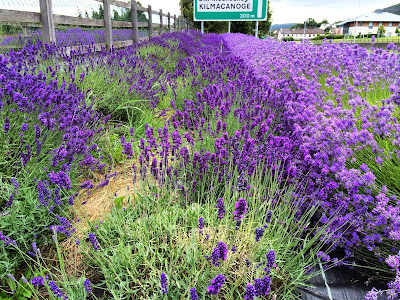 Nestling between the two Sugarloaf Mountains, this “field of dreams” still produces top quality lavender oil and provides the inspiration for many of the company’s ideas.

In 2005, the company launched its ‘Garden of Ireland’ range of soaps and bath products, inspired by the Wicklow countryside and using lavender oil from the company’s lavender field.

The lavender is harvested every summer in July, and the Lavender Harvest Party is a festival celebrating nature’s amazing gift of the golden oil from the lavender. 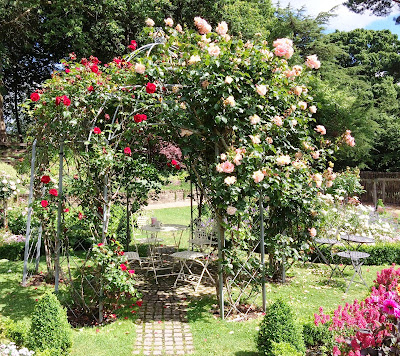 A summer afternoon scene in the garden centre at Avoca in Kilmacanogue (Photograph: Patrick Comerford, 2014)

After lunch in Avoca, we found ourselves walking around the garden centre beside the restaurant and shops. After last night’s description of my visit to the Botanical Gardens in Glasnevin on Saturday afternoon, I hardly realised I was going to spend part of another afternoon walking through flowers, plants and trees that I am still unable to name.

But the sun was pouring down, despite the rain that had been forecast, and I enjoyed yet another unexpected surprise 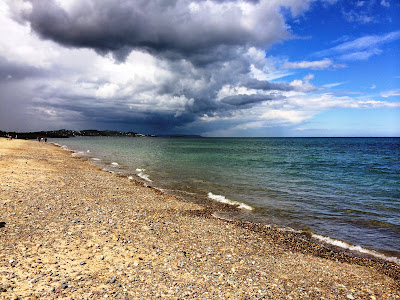 A walk along the beach in Bray this afternoon (Photograph: Patrick Comerford, 2014)

Later, we want for a walk along the shore on the beach in Bray, and stopped for double espressos in Carpe Diem, the Italian coffee and wine bar on Brennan’s Parade on Albert Avenue, close to the corner with Strand Road and across the street from the Promenade and Sealife.

We had another walk along the shoreline before driving up into the foothills, along the Rocky Valley Drive, with breath-taking views of the Sugar Loaf and the Wicklow Mountains on one side and down towards Bray and the bay between Bray and Dun Laoghaire on the other. 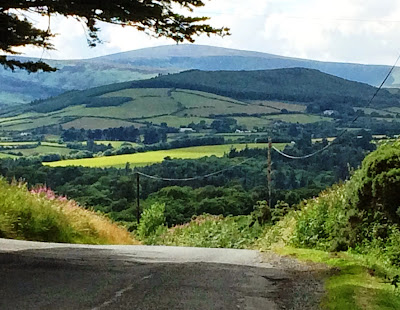 We stopped to buy fresh raspberries at Conroy’s, where the Conroy family has been in the business of growing Irish raspberries ever since Annie set her first canes over 40 years ago. Today, this harvest of rich and fruity berries is grown on specially chosen plants. Each day, punnets of raspberries are handpicked for freshness and quality, and the raspberries are sold directly from the farm from late June to early August.

The Conroys boast “the rich green countryside and panoramic views overlooking Powerscourt, the south Dublin and north Wicklow hills are as revitalising as the raspberries we grow,” and their website includes many imaginative recipes for their raspberries. 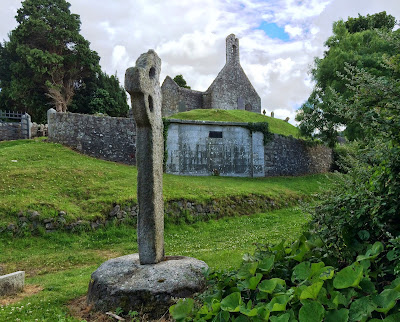 From the Rocky Valley Drive, we made our way back down to Powerscourt and Enniskerry, and then on to Kilternan and Stepaside, where we stopped to look at the ruins of the old church at Kilgobbin, with its High Cross, situated beside a large, new housing estate.

I did not manage to get inside the ruins of the Kilgobbin Church to see the Rathdown Slabs or Viking burial stones on the inner walls of the church.

The area may have been populated during pre-Norman times, and remnants of Belarmine pottery made in Germany ca 1500-1600 were found in the area. These Belarmine jugs were primarily used for storing wine, which indicates the former wealth and prosperity of the area.

The stone church on a hilltop in Kilgobbin was built in 1707 on the site of an earlier wooden church. It is claimed locally that this was the first church built in Ireland after the Reformation.

When the graveyard was being extended in the early 1800s, a three-armed 12th century high cross was unearthed. The cross was erected at the foot of the site, on what seems to be the remnants of an old ballaun stone. One side of the cross is said to depict a robed figure.

The church fell into ruin during the 1820s when a larger Church of Ireland parish church was built at Kilternan. 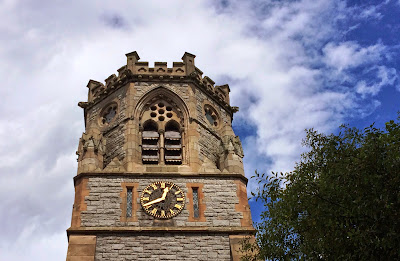 Earlier this morning, the setting for the Eucharist in Saint Bartholomew’s was the Missa de Sancta Maria Magdalena by the English/Canadian composer Healey Willan (1880-1968), sung by the Elgin Chorale. The setting is named after the Anglo-Catholic church in Toronto where Willan was organist from 1921 until his death.

Willan once described himself whimsically as being: “English by birth; Canadian by adoption; Irish by extraction; Scotch by absorption.”

The Elgin Chorale never got to singing this morning’s planned Communion motet, which is a setting by Ralph Vaughan Williams (1872-1958) of words by George Herbert (1593-1633).

I joked with them that the combination of the music of Vaughan Williams and the poetry of George Herbert is a sacramental expression of Anglican culture. But the words of that missing motet seem to summarise many of the joys and blessings of this weekend:

Come, my Way, my Truth, my Life:
Such a Way, as gives us breath:
Such a Truth, as ends all strife:
Such a Life as killeth death.

Posted by Patrick Comerford at 21:56