Through Lent with Vaughan Williams
(34): ‘The Wassail Song’ 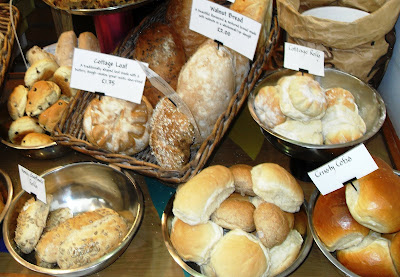 ‘Wassail, Wassail, all over the town, / Our bread it is white’ ... fresh bread in Hindley’s Bakery in Tamworth Street, Lichfield (Photograph: Patrick Comerford)

Yesterday [22 March 2015], I was listening to the hymn ‘Come down, O love divine’ for which Vaughan Williams wrote the tune ‘Down Ampey,’ named by Vaughan Williams after the pretty Cotswold village in Gloucestershire where he was born in the Vicarage on 12 October 1872.

This morning [24 March 2015], I continue the theme of Vaughan Williams’s connections with Gloucestershire, where he was born, and invite you to join me in listening to his joyful setting from 1913 of the ‘Gloucestershire Wassail.’

This is, perhaps, the most famous of all the local wassail traditions. ‘Wassail’ is an ancient toast meaning something like ‘Good health!’ It is also refers to a mulled cider that was part of ‘wassailing’ festivities, typically on the Twelfth Night of Christmas. To this day, the practice of wassailing survives as a folk tradition in many parts of England.

‘The Wassail Song’ (1913) comes long after Vaughan Williams had edited of the English Hymnal (1906). The intervening seven years were marked by intense activity, and in the end Vaughan Williams was to gather more than 800 songs and variant versions.

‘The Wassail Song’ grew out of these collecting efforts. He published his arrangement of the tune he had gathered as the last in a collection of folk song settings, the Five English Folk Songs, in 1913. The other four songs are ‘The Dark-Eyed Sailor,’ ‘The Springtime of the Year’, ‘Just as the Tide was Flowing,’ and ‘The Lover’s Ghost.’ Vaughan Williams turned to folk song for inspiration throughout f his career, but these five arrangements are often considered his best. Certainly they are the most elaborate, with the material treated freely throughout.

This morning’s is sometimes called ‘The Gloucestershire Wassail’ to distinguish it from ‘The Somerset Wassail.’ The best-known ‘Wassail’ song today, however, is ‘Here we come a wassailing among the leaves so green,’ which comes from Yorkshire. Many versions of wassail songs have been recorded by English folk groups, including Steeleye Span and Maddy Prior and the Carnival Band.

Vaughan Williams’s setting has kept alive ‘The Gloucester Wassail,’ which can be traced back to at least the 18th century. It is one of many songs celebrating the tradition of ‘wassailing’ from door to door, when singers are offered drink in thanks for their singing.

In the 19th century, the Christmas season was a time of drunken revelry for many until the Victorians turned it into the family holiday we know today. In ‘Deck the Halls,’ for example, the line “Don we now our gay apparel” was originally “Fill the mead cup, drain the barrel,” while “See the blazing Yule before us” was worded “See the flowing bowl before us”, and “sing we joyous all together” is really “Laughing, quaffing, all together.”

For his setting of ‘The Wassail Song,’ Vaughan Williams selected six of the eight verses, leaving out most of the references to specific barnyard animals. For example, the “ox” Vaughan Williams refers to is first a horse, Dobbin, and then two cows, Broad May and Colly, in the original.

When the song refers to “our bread it is white,” it is worth remembering that at one time white bread was not regarded as providing poor nutritional value or bland taste and a texture lacking in appealing texture, but was seen a delicacy enjoyed by the well-to-do.

Vaughan Williams begins the arrangement with a haunting introduction. Although the tune itself opens with a rising fourth (E–A), he commences with a series of rising fifths and then fourths (A–E at first and only then E–A), generating the hollow, ancient sound of harmony without thirds.

He creates rhythmic tension by first following the proper stress emphasis of the word ‘Wassail,’ presenting it as expected on the upbeat, and then going against this by placing it on the downbeat, which can throw choruses off in rehearsals.

Only after all voices have entered can the tenors bring forth the tune itself, eventually handed about to other parts as well.

Throughout the work, dynamics are of special importance, for if properly followed the impression Vaughan Williams creates is that of singers approaching from afar, eventually singing full force when they are nearest to the listener, and then fading away as they head off into the distance, ending with the altos alone on a ppp rising fifth.

‘The Wassail Song’ and original Oxford Book of Carols are not Vaughan Williams’s only ventures into Christmas music. Among his many seasonal creations are his Fantasia on Christmas Carols, including ‘On Christmas Night,’ for baritone, chorus, and orchestra, from the year before ‘The Wassail Song.’

One of the last major pieces he wrote was the spectacular Hodie for chorus, soloists, and orchestra, completed in his 82nd year.


This performance of ‘The Wassail Song’ was part of ‘Carols for Quire 5,’ at Trinity Cathedral, Cleveland, Ohio, on 20-22 December 2013

Wassail, Wassail, all over the town,
Our bread it is white and ale it is brown;
Our bowl it is made of the green maple tree;
In the Wassail bowl we’ll drink unto thee.

Here’s a health to the ox and to his long tail,
Pray God send our master a good cask of ale,
A good cask of ale as e’er I did see,
In the Wassail bowl we’ll drink unto thee.