Straffan: a private family church with
roots in an earlier parish history 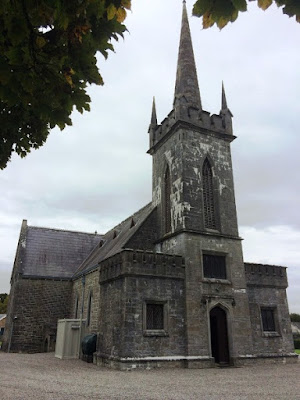 Straffan Church was built in the 1830s by Hugh and Anna Barton (Photograph: Patrick Comerford, 2015)

This afternoon [18 October 2015], I was invited by the Revd Stephen Neill to preach at the Harvest Thanksgiving Service in Straffan, Co Kildare.

In the past, I have stayed at Barberstown Castle in Straffan, when I have been at weddings, but this was my first time in the parish church in Straffan.

Straffan is part of the parish of Celbridge and Straffan with Newcastle Lyons, one of three churches on the borders of Co Dublin and Co Kildare, west and south-west of Dublin, and about 20 km from Dublin city centre.

Although suburban Dublin has almost reached them, each of these churches retains a mainly rural setting. These churches have individual and rich histories, stretching back to at least 1400, or even earlier. Saint Finian’s church in Newcastle Lyons, where I was invited to baptise a child about 15 years ago, was built ca 1400 on the site of older churches dating back to early Christian settlement. In contrast, both Christ Church, Celbridge, and Straffan Church, Straffan were originally private chapels on the Castletown and Straffan demesnes.

Straffan House, now better known as the K Club, was built in 1832. Because of Hugh Barton’s connections with the wine business in France with his friend Daniel Guestier, Straffan House was designed closely along the lines of Chateau Louveciennes by Frederick Darley of Dublin. 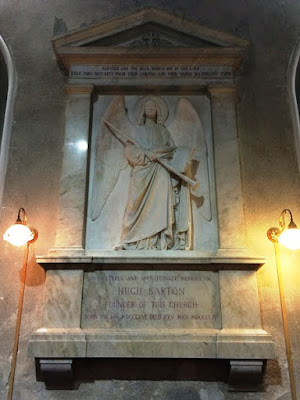 A monument to Hugh Barton in the nave of Straffan Church (Photograph: Patrick Comerford, 2015)

Straffan Church was founded by Hugh and Anna Barton in 1830, and was consecrated on 18 June 1838. The church was originally built by Hugh Barton as a private chapel for himself, his family and their large staff working at both Straffan House and on the land on the Straffan estate. Neighbours from the surrounding big houses also worshipped there.

The original church consisted of a porch with vestry and utility room surmounted by a spire. The porch opened into the nave with a simple sanctuary at the east end. The north and south transepts, followed by a raised sanctuary were added later giving the church its present cruciform shape.

The church remained a private chapel until 1933, when it was transferred to the Church of Ireland Representative Church Body (RCB). 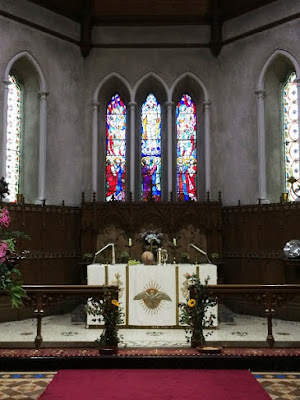 There are many memorials to members of the Barton family on the church walls. At the top of the nave is a fine carved font dated Christmas 1875. The carved pulpit, reredos and oak panelling around the sanctuary are of particularly fine workmanship. 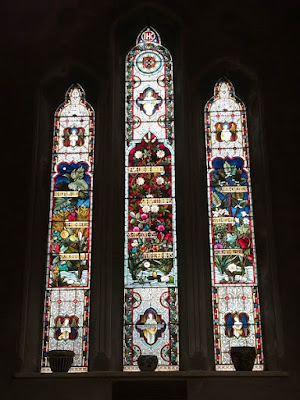 The windows in the transepts were made in the 1870s by Heaton, Butler & Bayne (Photograph: Patrick Comerford, 2015)

The oldest windows are in the transepts and were made in the 1870s by Heaton, Butler & Bayne. In the nave, there is a rich variety of later windows depicting Christ’s life and dedicated to the memory of Bertram Francis Barton, a former owner of Straffan House (1899-1904). The three windows on the south nave (Christ blessing the children; the Crucifixion; and the Resurrection) are by Alfred Ernest Child (1875–1939) of Dublin, part-time manager of Sarah Purser’s workshop at An Tur Gloine in Upper Pembroke Street, Dublin. The three windows in the north nave are by HW Bryans of London. 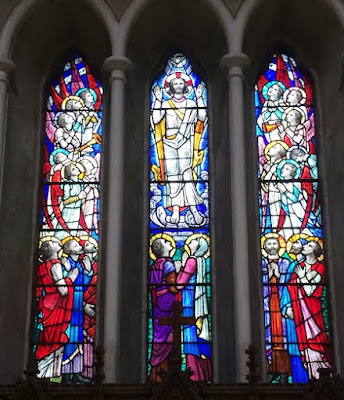 The East Window is by Catherine O’Brien of An Tuar Gloine (Photograph: Patrick Comerford, 2015)

The East Window by Catherine O’Brien of An Tuar Gloine is dedicated to Canon Lionel Fletcher, who was the Rector of Straffan for 50 years. All the other windows are dedicated to members of the Barton family.

The two manual organ was built by Peter Conagher & Co of Huddersfield and Dublin and installed in 1897. This fine organ is still in perfect weekly use. 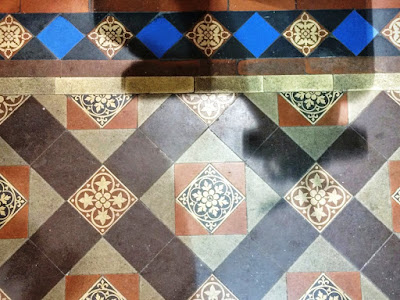 Encaustic tiles in the church are fine examples of this Victorian craft that is part of the Gothic revival (Photograph: Patrick Comerford, 2015)

The aisle has fine example of Victorian encaustic and mosaic tiles, perhaps by Minton or Craven Dunnill.

The graves in the churchyard are only of members of the Barton family and their descendants, but the churchyard also has a war memorial remembering parishioners who died in World War I. 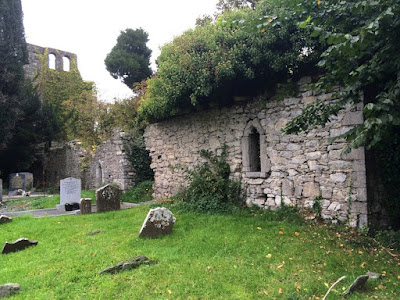 The ruins of Saint Patrick’s Church, Straffan, which dates back to the mid-13th century or earlier (Photograph: Patrick Comerford, 2015)

However, despite the relatively recent history of this church, the church presence in Straffan predates this church by many centuries. It probably dates back to the early 13th century, for around 1250 Saint Patrick’s, Straffan, and its vicarage, were incorporated in the Hospital of Saint John outside Newgate, Dublin.

The vicarage was suppressed in 1397 and was united with Saint John’s Hospital. But in 1531 Archbishop Allen restored the vicarage.

Few of the names of the Vicars of Straffan survive from this time, and from the end of the 17th century the parish was united with Kildrought (Celbridge), although this union was not made official until an Order in Council in 1829.

In 1933, Straffan was joined with Celbridge and Canon Lionel Fletcher (1865-1946) of Straffan was instituted as Rector of Celbridge that year. In all, he spent almost half a century at Straffan, from 1894 to 1943. 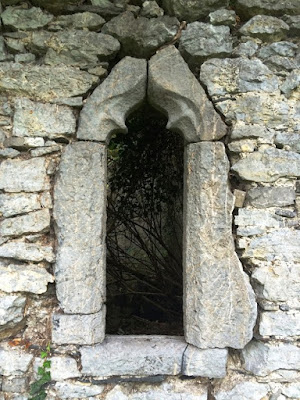 A Gothic window in the ruins of Saint Patrick’s, Straffan (Photograph: Patrick Comerford, 2015)