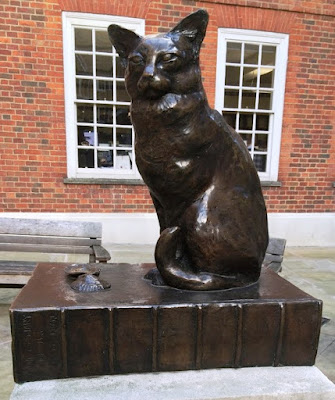 Today is the Third Sunday in Lent [25 February 2016], and I am presiding and preaching at the Eucharist this morning in Saint John’s Church, Sandymount, Dublin.

Hodge was one of Dr Johnson’s cats, and is remembered in a whimsical passage in James Boswell’s Life of Samuel Johnson (1799). In this passage, Johnson is claimed to have an affection for animals in general, or at least the ones that he kept:

I never shall forget the indulgence with which he treated Hodge, his cat: for whom he himself used to go out and buy oysters, lest the servants having that trouble should take a dislike to the poor creature. I am, unluckily, one of those who have an antipathy to a cat, so that I am uneasy when in the room with one; and I own, I frequently suffered a good deal from the presence of this same Hodge. I recollect him one day scrambling up Dr Johnson’s breast, apparently with much satisfaction, while my friend smiling and half-whistling, rubbed down his back, and pulled him by the tail; and when I observed he was a fine cat, saying, “Why yes, Sir, but I have had cats whom I liked better than this;” and then as if perceiving Hodge to be out of countenance, adding, “but he is a very fine cat, a very fine cat indeed.”

This reminds me of the ludicrous account which he gave [the writer] Mr [Bennet] Langton, of the despicable state of a young Gentleman of good family. “Sir, when I heard of him last, he was running about town shooting cats.” And then in a sort of kindly reverie, he bethought himself of his own favourite cat, and said, “But Hodge shan’t be shot; no, no, Hodge shall not be shot.”

Johnson was known to go out of his way to buy oysters to feed Hodge, even to the point of annoying his servants by pampering his pets.

After Hodge’s death, the poet Percival Stockdale wrote ‘An Elegy on the Death of Dr Johnson’s Favourite Cat’:

Not much is known about Johnson’s other cats, except that in a letter written in 1738 he mentions a white kitten named Lily, describing her as ‘very well behaved.’

A bronze statue to Hodge by the sculptor Jon Bickley stands facing Dr Johnson’s house in Gough Square, off Fleet Street, London. It was unveiled in 1997 and shows Hodge sitting on top of Johnson’s Dictionary, alongside some empty oyster shells. The monument is inscribed with the words “a very fine cat indeed.” 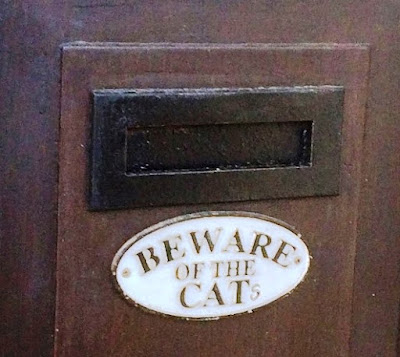 ‘Beware of the Cats’ … a sign on a front door in Beacon Street, Lichfield (Photograph: Patrick Comerford)