A Sunday filled with colour in
the cathedral and the countryside

It was wonderful to work this morning in harmony with one of the great cathedral choirs in the Anglican Communion.

The choir of the Cathedral of Saint John the Divine in New York sang the setting at this morning’s Choral Eucharist in Christ Cathedral, on a morning that I was the canon-in-residence and the preacher.

The celebrant this morning was the Revd Abigail Sines, the new Dean’s Vicar of the Cathedral, and the setting was the Missa Brevis S Johannis de Deo by Franz Josef Haydn (1732-1809). There were so many choir members from New York this the younger ones were sitting on benches in the front of the choir stalls, and I wondered as we processed in whether there would be a stall left for me as I reached the chapter stalls in the choir.

In all, there were 53 robed members of this morning’s choir.

The core of the Cathedral Choir in Saint John the Divine is formed by a 15-voice professional choir that sets the standard for music-making in the cathedral. Its members include some of New York City’s finest choral performers, who are also accomplished soloists in their own right. The Cathedral Choir provides music for the Sunday 11 am Eucharist and 4 pm Evensong services throughout the year and also sings for other major feast days, such as Christmas, Holy Week, and Easter.

In addition, the choir serves as the core ensemble for the Cathedral’s Great Music in a Great Space concert series.

The Cathedral Chorale is an auditioned volunteer choir that draws members from both the local Morningside Heights community and the greater New York City area. It rehearses on Wednesday nights from September through to May. The Chorale often joins the Cathedral Choir for services throughout the year, and is sometimes used to reinforce the professional choral forces for Great Music in a Great Space Concerts.

In 2013, the choristers sang in Carnegie Hall for the Oratorio Society of New York’s performance of Benjamin Britten’s War Requiem and travelled to London to sing services at Saint Paul’s Cathedral.

After singing at the Eucharist and Choral Evensong in Christ Church Cathedral, Dublin, today, the choirs from New York move on to London later this week to sing at Westminster Abbey. 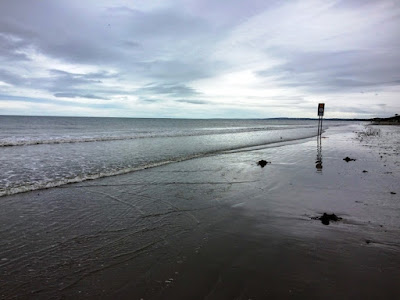 A grey day at the ‘Gold Coast’ of Co Meath in Bettystown (Photograph: Patrick Comerford, 2016)

Meanwhile, after this morning’s Cathedral Eucharist, two of us went for a walk on the beach on the ‘Gold Coast’ of Co Meath.

We stopped first at Laytown, but the tide was so high and in so far that it was impossible to walk on the beach.

Further north, at Bettystown, we were given a table by the window in Relish in Bettystown, and had lunch looking out over the high bank on the coast, out onto the beach and across to the Irish Sea.

This was a grey afternoon, with grey skies, grey clouds, grey waters and grey sands. But even summer has its variety of colours in the rain. Later, as we drove back between Drogheda, Julianstown and Gormanston, the fields were green and yellow as the harvest season moves towards its close.

It had been a colourful day in the cathedral and in the countryside.