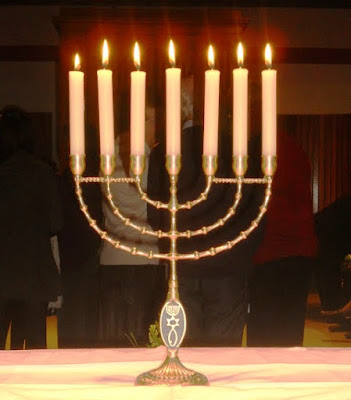 ‘No one after lighting a lamp puts it under the bushel basket’ (Photograph: Patrick Comerford)

I am back in the Church of Ireland Theological in Dublin for a few days teaching, and this evening I am presiding at the Community Eucharist in the chapel of CITI. The visiting preacher this evening is my friend and colleague, the Revd Canon Professor Adrian Empey, former Principal of the Church of Ireland Theological College and a former of Precentor of Christ Church Cathedral, Dublin, and of Saint Patrick’s Cathedral, Dublin.

This evening, our celebration includes the Readings, Collect, Proper and Post-Communion Prayer for last Sunday [5 February 2017], the Fourth Sunday before Lent.

Processional Hymn: ‘Guide me, O thou great Jehovah’ (Church Hymnal, 647) is a popular Welsh hymn that has been translated into 75 languages. The original Welsh version was written in 1745 by the Revd William Williams (1717-1791), and was translated into English by Peter Williams in 1771. The tune is more recent and was written by John Hughes for a Welsh Baptist singing festival in 1909, but was not printed in a hymnal until it appeared in the Methodist Hymn Book in 1933.

Gloria: ‘Glory in the highest to the God of heaven’ (Church Hymnal, 693) was written in 1976 by the Revd Christopher Idle, who has written over 300 hymns. He is now retired and is an Honorary Assistant Minister at Holy Trinity, Bromley Common. This hymn is a reminder of the Communion of Saints gathered around the Lamb on the throne. The tune ‘Camberwell’ was written in 1960 by the Revd John Michael Brierley while he was an ordinand at Lichfield Theological College and to honour the Revd Geoffrey Beaumont, then Vicar of Camberwell and remembered for composing the Twentieth Century Folk Mass while he was the chaplain of Trinity College, Cambridge.

Gradual: ‘There is no moment of my life’ (Church Hymnal, 19) was written by the late Father William Brian Foley (1919-2000), and is set to the tune ‘Newbury’ in the Irish Church Hymnal (No 19). This tune is one of the folk melodies arranged by Ralph Vaughan Williams (1872-1958). He found the tune in a collection published by Miss MG Arkwright in the Journal of the Folk-Song Society. There it was used for a Christmas carol, ‘There’s six good days set in a week,’ also known as the ‘Hampshire Mummers’ Carol.’ Vaughan Williams harmonised the melody for the English Hymnal in 1906, and set it to ‘The Maker of the sun and moon’ by Laurence Housman (1865-1959).

Offertory: Vaughan Williams also wrote the tune for this evening’s offertory hymn, ‘Come, my Way, my Truth, my Life’ (Church Hymnal, 610). The words are from ‘The Call,’ a poem by George Herbert (1593-1633), published in a posthumous collection of poetry, The Temple, in Cambridge in 1633. ‘The Call’ is essentially a meditation on Christ’s words to the Apostle Thomas: ‘I am the way, the truth and the life’ (John 14: 6). Herbert adds a number of additional allusions and offers real food for thought in the way he develops his theme. Because of the structure of each of the three stanzas, this poem is often described as ‘a trinity of trinities.’

Post Communion Hymn: ‘Judge eternal, throned in splendour’ (Church Hymnal, 535) is the only known hymn by Canon Henry Scott Holland (1847-1918), and embodies his two chief interests in life – social reform and the missionary work of the Church.