‘I became human for you,
will you become God with me?’ 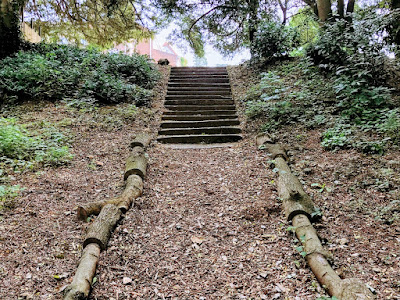 ‘What overwhelms us?’ … in the grounds of the High Leigh Conference Centre in Hoddesdon this morning (Photograph: Patrick Comerford, 2017)

‘What can we do about being overwhelmed?’

These questions were put to us this morning by Bishop Margaret Vertue of the Diocese of False Bay in South Africa. She was speaking at the USPG conference in High Leigh.

Bishop Margaret, who is the second woman to become a bishop in Africa, was leading this morning’s Bible study (Matthew 11: 20-24).

She challenged us to think of do we respond in love and not in judgment. Drawing on the wisdom of the Carthusian monks of Grand Chartreuse, and asked: ‘I became human for you, will you become God with me?’

To illustrate how we might respond in love and not in judgment, she shared ‘The Story of a Sign’ by Alonso Alvarez Barreda, with music by Giles Lamb. This short film from Purplefeather illustrates the power of words to radically change our message and our effect upon the world:

Today is Mandela Day, when everyone in South Africa is encouraged to donate time to charity and charitable work.

Describing the situation in her diocese in the Western Cape, she said apartheid had a pauper’s burial, so South Africa is still an angry nation and very volatile.

One-third of the population of the Western Cape live in the area of the Diocese of False Bay, where there are over 6 million people, and 40 per cent of these people live in the grips of poverty, only 24 per cent of learners ever finish school, and for many there is no opportunity to be educated beyond grade 12.

She spoke of the prevalence of gender-based violence, human trafficking, which is a modern-day slavery.

But she asked us to consider our own contexts and to discuss: ‘What overwhelms us? What can we do about being overwhelmed?’

And she asked, in the words of the wisdom of the Carthusian monks of Grand Chartreuse: ‘I became human for you, will you become God with me?’

Later in the morning, the Revd Dr Carlton Turner, from the Commonwealth of the Bahamas in the Church in the Province of the West Indies, spoke on ‘Growing the Church.’

God’s pattern for growing the Church is about entering chaos and bringing about something creative, something new.

He discussed the threats to life in the Caribbean, the legacy of slavery and colonialism, the natural disasters, including hurricanes, tropical storms and volcanoes, and the social and political and economic chaos. ‘When the US sneezes, we catch a cold.’

But it is also a region of amazing creativity, with carnivals and festivals, and a rich variety of languages and cultures, such as reggae and calypso.

Referring to the move from Chaos to Creativity of Pentecost, he spoke of recent violent incidents in Manchester and Finsbury Park as examples of situations where chaos can lead to creativity.

Referring to next Sunday’s Gospel reading, he suggested that good and bad co-exists together, but we are at risk if we try to weed them out. Growth means diversity. Diversity is key to growing the Church, as it flows outward.

‘God grows God’s Church,’ he said. We do not do what we do alone.

Given the complex and chaotic world in which we live, he asked, how can we work together to bring about something new, creative for the world to share in?

God is creative and unpredictable and the Spirit continues to move over the chaos of our world to bring about the new Creation. How does this challenge our mission and management frameworks and practices? 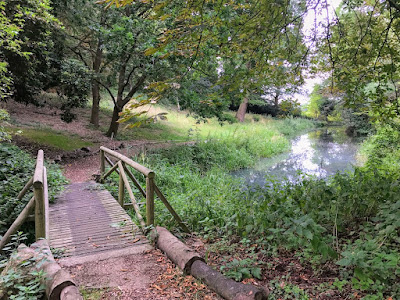 In the grounds of the High Leigh Conference Centre in Hoddesdon this morning (Photograph: Patrick Comerford, 2017)

Have you visited the Ancient Moated Site at Hoddesdonpark wood yet? A pleasant circular walk of about 1 hour.