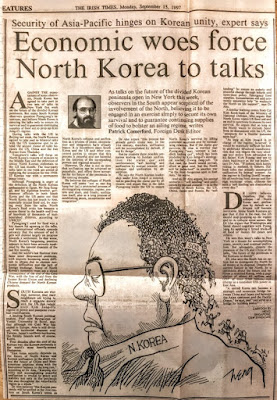 Twenty years, I was a Visiting Fellow at the Institute for Global Economics, based in Seoul in South Korea. At the time, I was Foreign Desk Editor of The Irish Times, and North Korea, which was in the grips of a famine, was about to enter into a fresh round of talks with the United States.

Little did I realise then that political and military events on the Korean peninsula would arrive at the position they are in today, brought about by delusional and self-serving rulers in North Korea and the United States.

But I am not alone in not realising how events were going to develop in two decades since I was in Seoul. Many analysts in South Korea, who made expert predictions on what would happen in North Korea in the 21st century, have found too that events have taken a different course.

Twenty years ago, on 15 September 1997, The Irish Times published this half-page analytical feature arising from my visit to Korea, which including crossing the DMZ that separate North Korea and South Korea:

As talks on the future of the divided Korean peninsula open in New York this week, observers in the South appear sceptical of the involvement of the North, believing it to be engaged in an exercise simply to guarantee continuing supplies of food to bolster an ailing regime, writes Patrick Comerford, Foreign Desk Editor

Against the expectations of some observers, North Korea has agreed to take part in two sets of talks in New York this week on the future of the divided Korean peninsula. But many South Korean observers question Pyongyang’s intentions, and believe North Korea is entering the talks only to ensure its survival and to guarantee continuing supplies of food aid to prop up Kim Jong-il’s regime.

During talks with the US in Beijing last week, the North Koreans agreed to take part in bilateral talks with the US tomorrow and to attend the second round of talks between the US, China and the two Koreas from Thursday.

Tomorrow’s talks will focus on North Korea's exports of missiles to the Middle East and the defection of senior North Korean diplomats to the US last month. The four-party talks later in the week are aimed at replacing the armistice for the 195053 Korean war with a permanent peace treaty.

Although Pyongyang is angry at the defection of the North Korean ambassador to Egypt, Mr Jang Sung-gil, and his diplomat brother, government officials in both South Korea and the US point out that North Korea has too much to lose, especially crucial food aid, by staying away from the talks. North Korea’s food crisis has become a severe threat to the health and lives of hundreds of thousands of malnourished children, according to UNICEF.

Pyongyang’s need for food was a key reason for agreeing to the talks, and international officials concede privately that the amount of aid it gets will depend largely on progress towards a settlement. In that sense, North Korea’s bargaining position appears to have been severely weakened by the natural disasters of the last few months.

And the world’s last Stalinist state faces more deep-seated problems, with imports becoming more difficult to obtain due to chronic economic difficulties and the lack of foreign exchange. Many of North Korea’s economic woes are a direct consequence of the end of the Cold War, with the loss of aid from the former Soviet Union and declining Chinese demand for North Korean products.

South Koreans are worried, however, that their neighbours are trying to reach a separate accord with the US that would keep Kim Jong-il’s regime in power and postpone eventual reunification.

A leading South Korean political analyst, Prof Ahn Byung-joon of Yonsei University in Seoul, says that although the Cold War has ended in Europe, Asia is still divided, with territorial disputes over Taiwan, Japan's northern territories, the Spratly Islands and, of course, Korea.

Four decades after the end of the Korean war, the Korean peninsula is the world’s most heavily-armed flashpoint.

“East Asian security depends on the future of North Korea and Korean unification in the short run, and the future of China and Sino-American relations along with the four-power balance in the long run,” according to Dr Ahn. “Keeping stability and accomplishing peaceful unification is crucial to peace and stability not only in the peninsula but also throughout the Asia-Pacific region as a whole.”

Dr Ahn believes “the Korean peninsula will be unified in the 21st century on South Korea's terms as North Korea’s collapse and unification as a process of peace, co-operation and integration have already begun. It is incumbent upon South Korea and the US and other concerned parties to ensure that this process is peaceful and not harmful to the interests of the surrounding powers and regional security.”

However, Dr Ahn is not so sure that unification can be achieved so peacefully, and offers three scenarios for the future of the peninsula in the coming decades.

He believes the collapse of North Korea will come “not as one big bang but a protracted process of disintegrating economy, regime, system and state, and finally, unification itself, also as a long process of establishing peace, co-operation and integration”

Dr Ahn argues “this process has already gotten under way. In the 21st century, therefore, unification will be accomplished by default, if not by design”.

He says the North Korean leadership under Kim Jong-il is committed to guarding the status quo by all means, and argues that in the talks Pyongyang wants the US to ensure North Korea's survival by lifting economic sanctions and by normalising relations. But if the status quo survives, Dr Ahn is worried that Pyongyang “may venture a last-ditch lashing out”, which has been predicted by Kim Jong-il’s ideological teacher, Hwang Jang-yob. “In that case, the South would prevail, albeit at great cost, but the North will be pulverised” in another war “in the most dangerous spot in East Asia,” he warns.

And so, Dr Ahn argues, his second scenario – “soft landing” and unification by mutual consent – is in the interests of South Korea, the US, China, Japan and Russia. By “soft landing” he means an orderly and peaceful change through reform and open-door policy. Emergency food supplies, humanitarian aid and economic assistance help “to maintain the North on life support”, says Dr Ahn.

A similar warning comes from Col Kim Kook-hum of the Ministry of National Defence, who argues that North Korea wants US food aid and an end to sanctions to ensure its own survival. He argues that so long as the North wants to exclude Seoul from its discussions with the US, the “prospects for a fruitful outcome seem bad”.

“As long as Kim Jong-il is in charge of the regime, however, it would be extremely difficult for him to undertake structural transformation that can negate the very ideology and policy lines advocated by his father, Kim Il-sung, and yet to claim legitimacy as the top leader,” says Dr Ahn. “If indeed, such happy ending is realised, it follows that both sides can actually accomplish unification by mutual consent. As the regime is finding [itself] incapable of resolving food, energy and foreign exchange crises, chances for such a `soft landing' are diminishing every day.”

Dr Ahn believes, therefore, that the collapse of North Korea and unification by default as a process will become inevitable. Some South Koreans argue that if this is the case, the US should stop propping up the regime and let its collapse come sooner. But Dr Ahn argues that Washington and Seoul should negotiate with Pyongyang by applying a broad trade-off of food or money for peace and reform.

He sees this week’s talks in New York as a means for accomplishing peace, security and eventual unification. But ultimately, despite the presence of the US and China at the talks, “the future of the peninsula is for Koreans to decide”.

Dr Ahn says the South has no option but to reintegrate the North by all means at its disposal. Despite the current famine in the North, he is optimistic about the future and believes a reunited Korea, with a population of about 65 million and GNP of over $700 billion, will emerge as a candidate fifth power in East Asia.

“A united Korea can become a strategic and economic bridge between China and Japan and between the Asian continent and the Pacific Ocean,” he says, and “can serve as a bridge for building peace.”