Why would clergy
meet in a room
named after Herod? 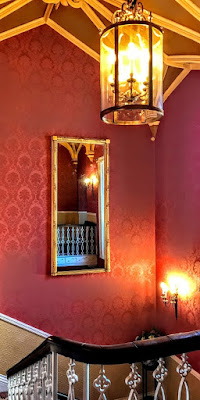 The stairs leading up to the Tetrarch in the Ardilaun Hotel in Galway (Photograph: Patrick Comerford, 2017)

The conference sessions in the Ardilaun Hotel in Galway this week are taking place in the Tetrarch Suite.

At first, some people were asking what the name meant. But others wanted to know whether the room was named after Herod the Tetrach. Who could imagine a group of priests and bishops meeting in a place named after Herod?

On the other hand, I am also familiar with the statue of the Four Tetrarchs at a corner of the facade of Saint Mark’s Basilica in Venice. Which of these four rulers could have given their name to a room in an hotel in the west of Ireland?

The term tetrarchy, from the Greek τετραρχία (tetrarchia), means the rule of or by four people,’ describes a form of government in which power is shared among four rulers.

Herod the Tetrarch should not be confused with Herod the Great. Saint Matthew and Saint Luke date the birth of Christ to the reign of Herod the Great (see Matthew 2: 1-12, 19; Luke 1: 5), who was the King of Judea and a large swathe of Palestine from 40 to 4 BC. It was he who tried to beguile the Magi on their way to Bethlehem, and he who ordered the slaughter of the innocent children.

But the other Gospel references to Herod are to Herod the Tetrarch. For example, Saint Luke sets the scene for the story of John the Baptist by recording that the events took place ‘In the fifteenth year of the reign of Emperor Tiberius, when Pontius Pilate was governor of Judea, and Herod was ruler [tetrarch] of Galilee, and his brother Philip [tetrarch] of the region of Ituraea and Trachonitis, and Lysanias ruler [tetrarch] of Abilene …’ (Luke 3: 1).

On the other hand, Saint Mark portrays Herod as a somewhat fearful and conflicted ruler who is easily manipulated by others (see Mark 6: 14-29).

Saint Luke records how Herod arrests and beheads Saint John the Baptist (Luke 3: 20; 9: 9) for being an outspoken critic of the tetrarch. This Herod directs similar animosity toward Christ, whom he seeks to kill (Luke 13: 31). Finally, when he meets Christ in Jerusalem, Herod mocks him and dresses him up in royal attire before returning him to Pilate (Luke 23: 6-12).

The word tetrarch suggests four rulers, although Josephus only mentions three. So, who were the four tetrarchs?

Because of Judea’s status as a Roman client kingdom, when Herod the Great died in 4 BC his plans for succession had to be ratified by the Emperor Augustus, and his three heirs travelled to Rome to make their claims.

Antipas argued that he ought to inherit the whole kingdom, but the others argued that Herod’s final should be honoured.

Augustus largely confirmed the division of territory set out by Herod in his final will. Archelaus, however, had to content himself with the title of ethnarch rather than king, while Herod Antipas and Philip were tetrarchs in inheritance, and Herod’s sister Salome I ruled as Queen of Jamnia.

When Salome I died in 10 CE, her domain was incorporated into Judea. But other parts of the Herodian Tetrarchy continued to function under the Herodian dynasty, so that Philip the Tetrarch ruled Batanea, with Trachonitis, as well as Auranitis until 34 AD, while Herod Antipas ruled Galilee and Perea until 39 AD.

The term not only describes different governments, but also different systems of government.

Historically, the term refers especially to the system introduced by Roman Emperor Diocletian in 293. This tetrarchy lasted until 313, when conflicts within the empire eventually left Constantine in control of the western half of the empire, and Licinius in control of the eastern half. However, the term tetrarch was never used during the reign of Diocletian.

During the system introduced by Diocletian, the four tetrarchs were based not at Rome but in other cities closer to the frontiers with bordering rivals and barbarians.

These four centres, or the tetrarchic capitals, were:

● Nicomedia in north-west Asia Minor, which is modern Izmit in Turkey.

●Sirmium, which is modern Sremska Mitrovica in the Vojvodina region of Serbia, near Belgrade on the Danube border. This was the capital of Galerius, the eastern Caesar, and would become the Balkans-Danube prefecture of Illyricum.

● Mediolanum, which is modern Milan, was near the Alps and was the capital of Maximian, the western Augustus. His domain was known as Italia et Africa.

● Augusta Treverorum is modern Trier in Germany. This was the capital of Constantius Chlorus, the western Caesar, near the strategic Rhine border. It had been the capital of Gallic emperor Tetricus I, and this quarter became the prefecture Galliae.

But there was no precise division between the four tetrarchs, and during this period the Roman state was not split up into four distinct sub-empires. But later writers misunderstood the tetrarchic system and believed it involved a stricter division of territories between the four emperors.

But, after exploring the concept of tetrarchy, and distinguishing between Herod the Great and Herod the Tetrarch, I found the room in the Ardilaun Hotel where we are meeting was called after none of these figures from antiquity.

The Persse family claimed kinship with the powerful Percy family of Northumberland. They were descended from the Revd Robert Persse, who came to Ireland at the end of the 16th century and lived in Bodenstown, Co Kildare. The family survived the 1641 rebellion and his grandson, the Very Revd Dudley Persse, was Dean of Kilmacduagh and Archdeacon of Tuam.

Dudley Persse was granted an estate in Co Galway by Charles II in 1677. By the 19th century, his descendants held lands in Galway, Offaly, Kilkenny, Mayo and Roscommon.

The Tetrarch (1911-1935) was one of the great thoroughbred racehorses owned by Atty Persse over 100 years ago, and has given his name to the Tetrarch Stakes at the Curragh. The Tetrarch was undefeated in a racing career of seven starts and was voted the best two-year-old of the 20th century.

With Steve Donoghue (1884-1945) in the saddle, the Tetrarch won all of his seven two-year-old races in 1914. But, because of doubts about his fitness, the Tetrarch was retired to Atty Persse’s cousin, Major Dermot McCalmot, and his stud in Mount Juliet, Co Kilkenny, where he sired many winners, including Tetramina, who in turn sired Mr Jinks, a maverick TD who was the only member of the Dail for the National League Party.

A notice outside the door of the conference room says Atty Persse remained convinced that the Tetrarch would never have been beaten over any distance such was his phenomenal speed.

The Tetrarch was sired by Roi Herode (France). His male line died out with the death of Kilmore, who won the Grand National in 1962. Undoubtedly his name referred to Herod’s abilitity to ‘kill more.’ So, indirectly, I suppose, the Tetrarch Suite owes its name to both King Herod and Herod the Tetrarch.