‘Almighty God, whose will
it is that the earth and
the sea should bear fruit’ 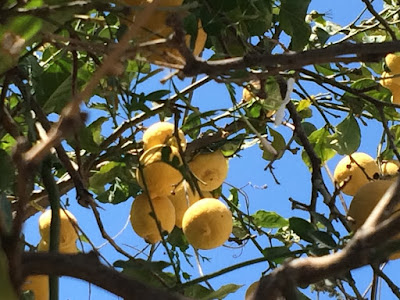 ‘As you have blessed the fruit of our labour in this Eucharist, so we ask you to give all your children their daily bread’ (the Post-Communion Prayer, Rogation Days) … fruit ripening on lemon trees in Platanes near Rethymnon on the Greek island of Crete (Photograph: Patrick Comerford)

The Sixth Sunday of Easter

The White-Robed Army of Martyrs on the walls of Sant’Apollinare Nuovo in Ravenna … from left to right, Cornelius is the fifth white-robed figure (Photograph: Patrick Comerford)

In our first reading this morning (Acts 10: 44-48), the Apostle Peter baptises Cornelius and his household. Cornelius is a Roman centurion stationed in Caesarea, and both he and Saint Peter have had visions, very different visions.

Centurions were not only professional military officers, but they were also law enforcers and tax collectors.

Cornelius now risks losing his position, his social status, and his income. All his family are put at risk too, and so this conversion has implications for his household, his family and for generations to come.

What risks are we being challenged to take in the Gospel reading, in our own Baptismal promises?

A carved relief of Nike, the goddess of victory, on a paved street in Ephesus … but the author of I John writes to the Church in Ephesus about more important signs of victory (Photograph: Patrick Comerford)

When we think of military figures taking risks, we sometimes think of one verse in this morning’s Gospel reading (John 15: 9-17). It is familiar to many of us because of the way one verse in it is often quoted on war memorials in our churches and cathedral: ‘Greater love hath no man than this, that a man lay down his life for his friend’ (John 15: 13).

However, in this Gospel reading Christ is talking about death and victory in a very different context, as he continues the theme of us abiding in him and he abiding in us, which we discussed last week.

We are listening to him these Sundays as he continues to prepare his disciples for his physical departure from them. He has already told us that he is the ‘true vine’ (see John 15: 1), and that we are the fruit and the branches. We are to represent him in the world and to present him to the world, bearing fruit and acting in his name, loving one another as Christ loves us and as the Father loves him.

This kind of love leads to joy, the ultimate victory. Christ, who is the model for our behaviour, loves us so much that he gave his life for us, his friends.

One of the best-known symbols of globalisation is the Nike Swoosh logo. You find it on tracksuits, on sweatshirts, on trainers, on sneakers, on T-shirts, all over the world. There must be very few people who do not recognise the Nike logo, which has been sported by the likes of Michael Jordan, Andre Agassi, Maria Sharapova and Venus and Serena Williams.

The company takes its name from Nike, the Greek goddess of victory, and the ‘Swoosh’ was designed in 1971 by Carolyn Davidson, a graphic design student at Portland State University. She met Phil Knight while he was teaching accounting classes and she started doing some freelance work for his company, Blue Ribbon Sports (BRS). BRS needed a new brand for a new line of athletic footwear it was preparing to introduce in 1972. Knight approached Davidson for some design ideas, and she agreed to provide them – at $2 an hour.

Carolyn Davidson quickly presented Phil Knight and others at BRS with a number of designs, and they finally selected the mark now known globally as the Nike Swoosh – an abstract outline of an angel’s wing that some people think looks more like a checkmark or the tick used on some essays to indicate a positive mark.

The company first used the logo as its brand in 1971, when the word ‘Nike’ was printed in orange over. The logo has been used on sports shoes since then, and is now so well-recognised all over the world, even by little children, that the company name itself is, perhaps, superfluous.

Carolyn Davidson’s bill for her work came to $35. Mind you, 12 years later, in 1983, Knight gave Davidson a gold Swoosh ring and an envelope filled with Nike stock to express his gratitude. It is surprising to realise, therefore, that Carolyn Davidson’s design was not registered as a trademark until 1995.

A logo representing victory is an appropriate and meaningful symbol for a company that manufactures and sells running shoes. The logo is used in tandem with the slogan, ‘Just do it,’ and the branding campaign was so successful in communicating to their target market that the meaning for the logo evolved into a battle cry and the way of life for an entire generation. A small symbol has brought victorious success to a once-small company.

What is said to be one of the earliest inspirations for the Nike tick sign is a carved relief of Nike, the goddess of victory, on a paved street in Ephesus.

But when Saint John was writing to the Church in Ephesus, he expressed very different ideas about victory to his company of little children as he discussed love and told them to ‘just do it.’

In our Epistle reading (I John 5: 1-16), we are reminded of the connection between faith and love, the two great themes of this epistle, and to victorious faith leading to eternal life. I John talks about a very different type of victory than the victories associated with commercial branding, globalisation and the financial glory associated with brand names and over-commercialised sport. Instead, the writer emphasises the victories associated with faith and love ... faith in God, Father, Son, and Holy Spirit, and the love of God and of one another that should be the victorious tick sign of Christians.

As we come towards the end of reading Saint John’s first letter, we are reminded that everyone who believes in Jesus as Christ and the Son of God is a child of God too. And so, if we believe in God and in Christ as his Son, we should love God and love his children, and this is the imperative for Christians to love one another.

But how do we know that we are doing this and showing that love? We know that know that we truly love the children of God when we love God and obey his commandments. Gestures of charity are simply not good enough – there must be a direct connection between loving others and living a life of holiness and sanctity.

Unlike the traditional observation and codification of the commandments, with their heavy-laden and burdensome listings and enumerations, the author tells us the love of God and love of others is not a great burden for the Christian. On the other hand, as the great German martyr of World War II Dietrich Bonhoeffer reminds us, there is no cheap grace, there is a cost to discipleship.

I was saying at the very beginning that this is Rogation. But it is not just the land and the fields that are supposed to be fruitful. Christ says in our Gospel reading: ‘I appointed you to go and bear fruit’ (John 15: 16). 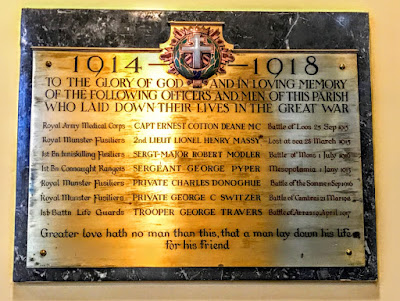 ‘Greater love hath no man than this, that a man lay down his life for his friend’ … John 15: 13 quoted on the World War I memorial in Holy Trinity Church, Rathkeale, Co Limerick (Photograph: Patrick Comerford)

‘I appointed you to go and bear fruit, fruit that will last’ (John 15: 16) … fruit on a market stall in Rome (Photograph: Patrick Comerford)

This Sunday, the Sunday before Ascension Day, is known traditionally as Rogation Sunday. This is the day when the Church prayed, ‘Almighty God, whose will it is that the earth and the sea should bear fruit in due season’ and traditionally offered prayers for God’s blessings on the fruits of the earth and the labours of those who produce our food.

The word ‘rogation’ comes from the Latin rogare, ‘to ask.’

The Collect of the Day (the Sixth Sunday of Easter):

‘Almighty God, whose will it is that the earth and the sea should bear fruit in due season’ … spring fruit ripening on the trees in Thessaloniki earlier this month (Photograph: Patrick Comerford, 2018)

This sermon was prepared for Sunday 6 May 2018.