Bringing Byzantium to
life with a course
in Kilkenny in 2004

The courses were part of a liberal studies programme organised as part of the access programmes run in conjunction with NUI Maynooth (now Maynooth University) on its Kilkenny campus.

I had recently left The Irish Times and was lecturing part-time on the BTh programme at the Church of Ireland Theological College (now CITI), and was also working with a mission agency based in Dublin.

Those were two interesting years. The two mini-courses offered the opportunity to meet friends in Kilkenny for lunch, including the late Peter Barrett, who was then Bishop of Cashel, Ferns and Ossory, the late Herbie Sherman, who was then the editor of the Diocesan Magazine, and Norman Lynas, who was then the Dean of Saint Canice’s Cathedral.

In the years that followed, I would learn to put my lecture notes on-line, making them available not only to students, who could interact more positively in the lecture room setting rather than taking furtive notes, but also for a wider circle at readers who could find easy access to courses they might not otherwise have an opportunity of signing up for.

I only started this blog in July 2010, six or seven years after designing and delivering these courses in Kilkenny.

Over time, as I found notes from lectures before July 2010, or journal papers, book chapters and newspaper features that I wanted to continue sharing, I began to post them on this blog.

In the meantime, however, I had lost many photographs and lecture notes. They included many photographs from travelling throughout China, photographs I had taken during many visits to Romania, Greece, Cyprus, Egypt and on Mount Sinai.

When digital cameras became popularly available, none of us realised that the cards held far fewer images than many of us have on a modern mobile phone over the course of a day today. Copying those photographs and lecture notes on discs seemed to be a good way of holding onto those memories.

But discs and memory cards were misplaced over time, they were inadequately labelled or indexed, or simply got lost moving from one office to another or one house to another.

I came across a few old discs a few weeks ago, at the bottom of a packing case, and had no idea what was on them.

I still have no idea what was on many of them. They have been corrupted, overwritten, or are no longer compatible with any laptop or system I can access.

But I came across a file with eight of the 12 lectures I delivered in Kilkenny back in 2004 on that module in Byzantine studies.

Last night, I decided to upload them onto this blog, backdate them to the days they were delivered, and add a few photographs to live them up.

Since I designed and delivered those two modules, many things have changed. Earlier this year, Maynooth closed its Kilkenny campus at Saint Kieran’s College.

Although I return to Kilkenny regularly – I am hoping to attend David McDonnell’s installation as Dean of Saint Canice’s Cathedral on Thursday evening – and I continue to write features each month in the Diocesan Magazine, I am unlikely to find myself delivering a similar course on Byzantine studies in the years to come.

And, while I have only found eight of the 12 lecture notes for that module on Byzantine studies, I still think they offer a good introduction to the topic, providing a contemporary cultural context, drawing on the poetry of Constantine Cavafy, WB Yeats and Leonard Cohen, for example, as well as a reading list, suggested music to listen to, poetry and some links.

I designed and delivered the course in between working trips that also brought me to Romania, Athens, Alexandria, Mount Sinai in those months, followed by a week’s stay at Vatopedi Monastery on Mount Athos. So, the continuity in lectures was disrupted for all of us. But those working trips made the course a very living experience for me back in 2004, and I hope I enthused those who were taking part.

Should I find the missing, final four lectures on another disc, I hope to add them in time too.

The eight lectures available since last night are:

3, A brief history of Byzantium and the Byzantine Empire (9 February 2004);

4, Heroes, anti-heroes and the women of Byzantium: some biographical sketches (9 February 2004);

The missing lectures from this programme are:

9, The other Byzantiums: Alexandria, Jerusalem, Damascus: the world of Dalrymple in the past and today. 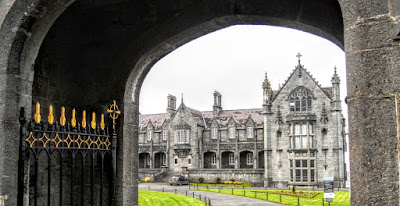 The entrance to Saint Kieran’s College, Kilkenny … the venue for the course on Byzantine Studies in 2004 (Photograph: Patrick Comerford)

I look to reading these lectures