‘Then they came for the Jews,
and I did not speak out’: the
costly message of Hanukkah 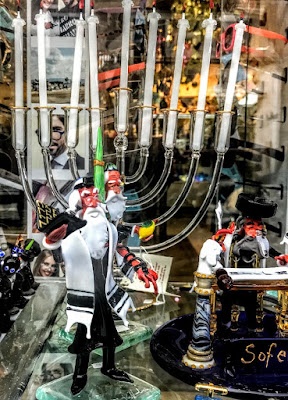 Celebrating Hanukkah … a work in Murano glass seen in a shopfront in Murano in the lagoon of Venice last week (Photograph: Patrick Comerford, 2018)

I am in Limerick this evening for the Advent procession, ‘Darkness into Light,’ in Saint Mary’s Cathedral. The theme of darkness and light is important in both Jewish and Christian traditions at this time of the year, and in the Jewish calendar this evening [2 December 2018] is the first night of Hanukkah, the holiday that continues for eight days until nightfall on Monday 10 December 2018.

Hanukkah continues for eight nights and days, starting on 25 Kislev in the Hebrew calendar, and falls sometime between late November and late December.

The name Hanukkah comes from the Hebrew verb ‘חנך‎’ meaning to dedicate. On Hanukkah, the Maccabean Jews regained control of Jerusalem and rededicated the Temple. Many homiletical explanations have been given for the name:

The story of Hanukkah is told in the First and Second Book of Maccabees, which describe in detail the re-dedication of the Temple in Jerusalem and the lighting of the menorah.

These books are not part of the Tanakh or Hebrew Bible, which came from the Palestinian canon. However, they were part of the Alexandrian canon, the Septuagint (LXX).

The story of Hanukkah is alluded to in I Maccabees and II Maccabees. The eight-day rededication of the temple is described in I Maccabees 4: 36 to 4: 59, although the name of the festival and the miracle of the lights do not appear there.

A similar story is alluded to in II Maccabees 1: 18 to 1: 36, where Nehemiah relights the altar fire in a miracle on 25 Kislev, which appears to be the reason why Judah Maccabee choses this date for rededicating the altar.

In the New Testament, John 10: 22-23 recalls Christ walking in Solomon’s Porch at the Temple during ‘the festival of the Dedication … in Jerusalem. It was winter.’

Judea was part of the Ptolemaic Kingdom of Egypt until 200 BCE when King Antiochus III the Great of Syria defeated King Ptolemy V Epiphanes of Egypt at the Battle of Panium. Judea then became part of the Seleucid Empire of Syria.

King Antiochus III the Great, guaranteed the right of his new Jewish subjects to ‘live according to their ancestral customs’ and to continue to practice their religion in the Temple of Jerusalem. However, in 175 BCE, his son Antiochus IV Epiphanes invaded Judea, at the request of the sons of Tobias. They had led the Hellenising Jewish faction in Jerusalem, and were expelled to Syria around 170 BCE when the high priest Onias and his pro-Egyptian faction seized control. The exiled sons of Tobias lobbied Antiochus IV Epiphanes to recapture Jerusalem.

The Second Temple in Jerusalem was looted, public worship stopped, and Judaism was outlawed. In 167 BCE, Antiochus ordered an altar to Zeus erected in the Temple. He banned circumcision and ordered pigs to be sacrificed at the altar of the Temple.

Antiochus’s actions provoked a large-scale revolt. Mattathias, a Jewish priest, and his five sons Jochanan, Simeon, Eleazar, Jonathan, and Judah led a rebellion. It started with Mattathias killing first a Jew who wanted to comply with Antiochus’s order to sacrifice to Zeus, and then a Greek official who was to enforce the government orders.

Judah became known as Judah the Hammer. By 166 BCE, Mattathias had died, and Judah replaced him as leader. By 165 BCE, the Jewish revolt against the Seleucid monarchy was successful. The Temple was liberated and rededicated. The festival of Hanukkah was instituted to celebrate this event.

Judah ordered the Temple to be cleansed, a new altar built in place of the polluted one and new holy vessels made. According to the Talmud, pure olive oil with the seal of the high priest was needed for the menorah in the Temple, and it had to burn throughout the night every night. The story goes that one flask was found with only enough oil to burn for one day, but it burned for eight days, the time needed to prepare a fresh supply of oil for the menorah. An eight-day festival was declared by the Jewish sages to commemorate this miracle. 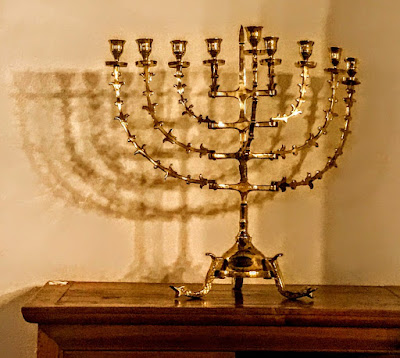 The Hanukkah menorah on a shelf in the synagogue in Chania in Crete (Photograph: Patrick Comerford, 2018)

The version of the story in I Maccabees says an eight-day celebration of songs and sacrifices was proclaimed with the re-dedication of the altar, but it makes no specific mention of the miracle of the oil.

Both books are part of the Old Testament in Roman Catholic and Orthodox editions, but were rejected by many traditions at the Reformation. They are regarded by Anglicans as part of the Apocrypha in the Old Testament. By excluding these books from Biblical readings, many Church traditions miss a story that was part of the Christian narrative for 1,500 and also miss a story that Jews see as miracle that confounds racism, anti-Semitism and religious and racist hatred.

The Jewish historian Josephus, in his Jewish Antiquities, tells how the victorious Judas Maccabeus ordered lavish yearly eight-day festivities after rededicating the Temple in Jerusalem that had been profaned by Antiochus IV Epiphanes. Josephus does not say the festival was called Hanukkah but rather the ‘Festival of Lights.’

The miracle of the one-day supply of oil miraculously lasting eight days is first described in the Talmud, written about 600 years after the events described in the books of Maccabees. The story is widely regarded as a legend and its authenticity has been questioned since the Middle Ages.

The Talmud says that after the forces of Antiochus IV were driven from the Temple, the Maccabees discovered that almost all of the ritual olive oil had been profaned. They found only a single container that was still sealed by the High Priest, with enough oil to keep the menorah in the Temple lit for a single day. They used this, yet it burned for eight days. 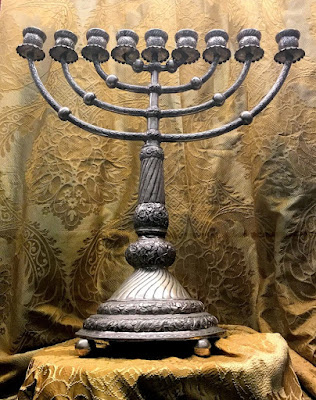 Hanukkah is not a Sabbath-like holiday, and there is no obligation to refrain from work and similar activities forbidden on the Sabbath. People go to work as usual but may leave early to get home to light the lights at nightfall.

The festival is marked by lighting candles on a candelabrum with nine branches, a Hanukkah menorah (or hanukkiah). One branch is typically placed above or below the others and its candle is used to light the other eight candles. This unique candle is called the shamash (שמש‎, ‘attendant’). Each night, one additional candle is lit by the shamash until all eight candles are lit together on the final night.

The Talmud prohibits using the Hanukkah lights for anything other than celebrating the Hanukkah miracle. They are not for lighting the house, but so passers-by who see it and are reminded of this miracle. This means lamps placed at a window or near the door facing onto the street.

The Hanukkah menorah is also kindled daily in the synagogue, at night with the blessings and in the morning without the blessings.

A large number of songs have been written on Hanukkah themes. One of the best known is Ma’oz Tzur (Rock of Ages), written in the 13th century by a poet known as Mordechai. The tune is most probably from a German hymn or a popular folk song. Some Sephardic families recite Psalms, such as Psalms 30, Psalms 67 and Psalms 91.

Many families exchange gifts each night, such as books or games. Traditional foods include potato pancakes, known as latkes, jam-filled doughnuts and fritters. Rabbinic literature also records a tradition of eating cheese and other dairy products during Hanukkah, to remember Judith and how she overcame Holofernes by feeding him cheese, which made him thirsty, and giving him wine to drink. When Holofernes became very drunk, Judith cut off his head.

The story of Hanukkah is one of resistance to hatred, prejudice, racism and anti-Semitism. It is a story that too many Christians are unaware of, both its narrative and its significance. 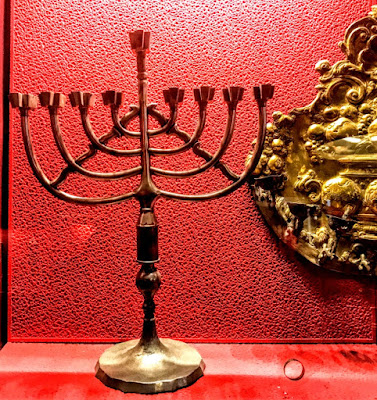 But today anti-Semitism is on the rise as a pernicious form of hatred and racism. Earlier this week in New York, a Jewish professor’s office at Columbia Teachers College was vandalised with anti-Semitic graffiti, including swastikas and an anti-Semitic slur.

Professor Elizabeth Midlarsky researches the Holocaust and how non-Jews helped Jews during the Holocaust. She arrived at work to find large swastikas scrawled in red paint on the walls outside her office. The word ‘Yid’ was also spray-painted on her wall.

This is not the first time her office was vandalised. In 2007, a swastika was spray-painted on her office door and her mailbox was stuffed with anti-Semitic flyers.

The ‘current atmosphere’ includes the Pittsburgh synagogue shooting at the end of October. In this mass shooting, 11 people were murdered at the Tree of Life – Or L’Simcha Congregation in Squirrel Hill on 27 October while Shabbat morning services were being held. Seven other people were injured in the deadliest attack so far on the Jewish community in the US.

All this has taken place since the election of Donald Trump as President of the United States. Until a few months ago, I found myself comparing the rhetoric from the White House and those late tweets with the utterances from the far-right in Germany in the early 1930s. But, after visits in the past three months to the New Synagogue and other key places in the former Jewish Quarter in Berlin on the 80th anniversary of Kristallnacht, to the concentration camp at Sachsenhausen, and to Europe's first ghetto in Venice, I am now convinced that what is happening has brought us closer to 1938.

Barbed wire fences have gone up, children are being separated from their parents and detained in cages and compounds, ethnic and cultural minorities are being targetted with impunity by the ultra-right while the president regards himself as supreme leader, above the law and speaking in repeated slogans that stir up the crowds, and says the victims share equal responsibility for attacks. And now troops are being told to fire gas and live ammunition at people who are disparaged and marginalised.

Before he left office, President Barack Obama said: ‘The light of hope must outlast the fires of hate. That’s what the Hanukkah story teaches us. It’s what our young people can teach us – that one act of faith can make a miracle, that love is stronger than hate, that peace can triumph over conflict.’

In the face of the right-wing racist hatred fuelled by the Trump administration it is important that we all pay heed to the message of Hanukkah. The peril of not being aware of the dangerous and slippery road we are all facing is summarised in the words quoted on the Holocaust Memorial in Washington of the theologian Martin Niemöller (1892-1984), held as prisoner at the concentration camp in Sachsenhausen: 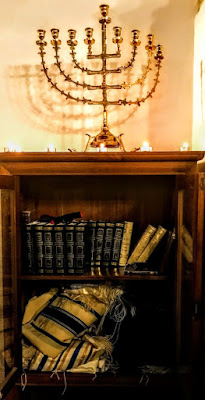 Hanukkah means ‘the light of hope must outlast the fires of hate’ (Photograph: Patrick Comerford, 2018)