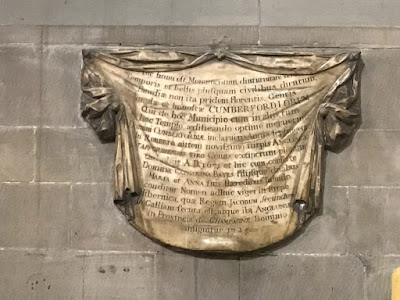 In my many talks and papers over the years, I have often told the stories of the last Comberfords at Comberford Hall, between Lichfield and Tamworth.

Catherine (Bates) Comberford was the widow of Robert Comberford, who had managed to recover Comberford Hall in 1656, despite the vicissitudes of the English Civil War. Robert died in 1669 – not in 1671, as stated on the memorial in the Comberford Chapel in Saint Editha’s Church, Tamworth.

Despite the misleading claims on the Comberford memorial, Robert’s widow Catherine and her children continued to live on at Comberford Hall into the 18th century. She made her will on 18 January 1715, and states that she is living in Staffordshire and a widow.

Catherine and Robert Comberford were the parents of two daughters: Mary, who married Thomas Giffard and who died in 1683; and Anne, who married Thomas Brooke of Madeley, who lived at Comberford. Thomas Brooke was the son of Thomas and Anne (Nevill) Brooke and the grandson of Sir Basil Brooke, the inventor of iron smelting and the so-called father of the industrial revolution.

Catherine's two daughters, Mary and Anne, predeceased their mother, and so in her will Catherine Comberford, having outlived her daughters, names her grandchildren, providing interesting insights into her family and how they held on to the remnants of the Comberford estates.

In her will, Catherine leaves the bulk of her estate to her two granddaughters, Catherine Brooke, the daughter of Thomas Brooke, and Mary Grosvenor, wife of Sherrington Grosvenor of Tamworth. She leaves these two granddaughters all her land and property situated in Wigginton in the parish of Tamworth, Staffordshire, which she had originally bought from William Brampton. She also leaves land and property in Hopwas, Staffordshire, then occupied by Henry Ashmore, and a small meadow in Cawford Meadow within the Parish of Tamworth.

She leaves to her grandson John Brooke land called the Wall Furlonge in Tamworth, which she bought from the late James Pritchard and by then occupied by William Pritchard. However, she gives this land to John Brooke ‘on the express condition’ that within two years of her decease he pays £40 to help his two sisters, Catherine Brooke and Mary Grosvenor, so that they may use that money to pay her debts and legacies.

If John Brooke fails to do this, Catherine insists, then he must give the land she has given him to his two sisters. She has another property at Hopwas, which she had bought from Francis Astbury and which is then occupied by Thomas Astbury. She gives this to her two granddaughters, Catherine Brooke and Mary Grosvenor.

She also gives both her granddaughters £1,000, ‘at present held in the hand of Lord Cobham.’ She gives £20 to her cousin, ‘Isabell Palin wife of Thomas Palin’ of Downesdale, Staffordshire.

Probate was granted three years later on 24 November 1718, so we can estimate that Catherine Comberford died at Comberford Hall in mid to late 1718. 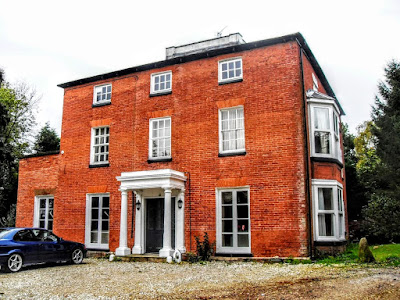 Because Catherine Brooke, Catherine Comberford’s granddaughter, is not married at this time, I had failed to pursue any further biographical details. But, in recent weeks, I have found that after the death of her grandmother Catherine Comberford, Catherine Brooke married Thomas Purcell. This Purcell family lived in Stafford earlier in the 17th century. While there is some speculation that they were related to the composer Henry Purcell (1659-1695), this seems highly unlikely.

In this will, Catherine (Brooke) Purcell describes herself as a widow, late of The Hay in the parish of Madeley in Shropshire, but by then living in the Parish of Saint Andrew, Holborn, in Middlesex, widow. She drew up her will on 10 December 1744, and it was proved on 1 September 1746.

Catherine and Thomas Purcell had no children. In her will, Catherine gives £500 each to her two nieces, Ann and Mary Grosvenor, daughters of Sherrington Grosvenor of Holt in the Parish of Kingsbury, Warwickshire. But, pointedly, she leaves only £1 1s to her nephew, also named Sherrington Grosvenor.

Catherine bequeaths to her ‘dear Brother John Brooke’ the sum of £50 for mourning and 20 shillings for a ring.

‘But,’ referring to her brother and her nephew, she says, ‘I declare they do not deserve anything from me they not having given me the least relief though I have for several years last past been driven to such extremities as often to want common necessaries of life and must have perished for want had I not been relieved by my executors.’

She gave £20 to Richard Foster ‘for his kindness towards me.’ She left £500 to be divided between Elizabeth and Janet Vaughan, daughters of Thomas Vaughan of Essex Street in the parish of Saint Clement Danes, London, ‘as a token of my gratitude for the great kindness and civility he has shown me.’

She also leaves £500 for William Morris, the infant son of Thomas Morris, now living in Brooks Market in Saint Andrew’s Parish, Holborn, expressing gratitude for ‘the great kindness often showed me by … Thomas Morris and for his procuring me a friend and for several expenses he has been at in my support and maintenance and in consideration of the love and affection I have and bear towards the said William Morris. for whom I wish I could better provide.’

Catherine must have been quite a well-off woman when she married Thomas Purcell, and she appears to have inherited most of her wealth from her grandmother, Catherine Comberford.

As for the last remaining family property holdings in Comberford, they were disposed of in a deed of partition, involving the lease and release of property in the Manor of Comberford and Wigginton, on 29 June 1771 by Sherrington Grosvenor of Langley, Buckinghamshire, and Christopher Astley of Tamworth, to John Millington of Tamworth. 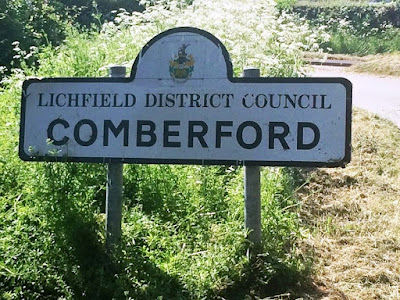 The last remaining Comberford holdings were divided in a lease and release of the property in 1771 (Photograph: Patrick Comerford)