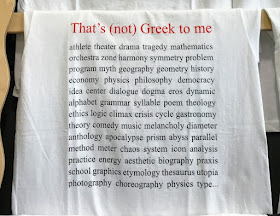 Not every word in the Greek dictionary can fit on a T-shirt (Photograph: Patrick Comerford)

This day was officially declared International Greek Language Day two years ago [2017], when the date was chosen because it coincides with the Commemoration Day of Greece’s national poet, Dionysios Solomos.

Dionysios Solomos is best known for the Hymn to Liberty (Ύμνος εις την Ελευθερίαν), which became Greece’s national anthem, and he is considered the national poet of Greece. He was born in Zakynthos on 8 April 1798 and died on 9 February 1857.

This initiative aims is to highlight the fundamental role played by the Greek language in world culture throughout the centuries and to encourage the Greeks of the diaspora and others to get involved in and to learn about Greek culture.

Greek is one of the oldest surviving Indo-European languages. It has an important place in the history of the Western world and Christianity. The canon of ancient Greek literature includes works such as the epic poems of the Iliad and the Odyssey.

Greek is also the foundational language of Western science, especially astronomy, mathematics, logic, and philosophy, such as the Platonic dialogues and the works of Aristotle. The New Testament was written in Koine Greek.

Together with the Latin texts and traditions of the Roman world, the study of ancient Greek writings and society constitutes the discipline of Classics.

In the modern world, the Greek language is not restricted by borders. Countless Greek words enrich other languages, as well as international scientific and medical terminology, so that about 80 per cent of the scientific terms have a Greek root.

The Greek Ministry of Education noted this week how ‘it is important to learn and love the Greek language, because of its virtues, but mainly because it has expressed a great culture.’ The Ministry goes on to say that the Greek language ‘shaped and codified the first … layer of vocabulary, and the basic concepts of, Western civilisation.

‘Over the centuries, its contribution has been decisive as a means of enhancing and spreading Greek culture, and today, it is considered as one of the world’s oldest languages,’ according to the ministry.

As the official language of two EU member states, Greece and Cyprus, it is one of the 24 official languages of the European Union. A rough estimate suggests Greek is spoken by over 13 million people in Greece, Cyprus and the Greek diaspora around the world.

He is the sort of character who might have inspired a T-shirt I saw on sale in Rethymnon the year before last listing a series of words with Greek roots.

During those two weeks in Crete, I posted a series of blog essays on familiar Greek words and – often with a sense of humour – sharing the thoughts that come to mind when I hear or read these words, with references to classical, Biblical and theological themes.

In the political and economic crisis that continues to eat into the hearts of many Greeks, some of the words I did not use in that series include drama, tragedy and politics itself. Nor did I use the words comedy, climax, apocalypse and abyss.

But this is a list of the words I mused on in that series, with a link to each word:

In Trinity College Dublin last night for the opening of this year’s programme of the Irish-Hellenic Society (Photograph: Patrick Comerford, 2019)