The Greeks have a word
for it: (2) philoxenia 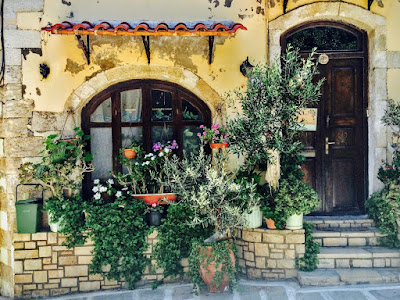 Welcome to my world ... a front door in a back street in Rethymnon (Photograph: Patrick Comerford)

Irish people like to think of Ireland as the land of a hundred thousand welcomes. English people have always put a high value on hospitality – although I fear the ‘Brexit’ referendum a year ago and its aftermath raises doubts about whether hospitality is widely cherished as an English value today.

But our concepts of welcome and hospitality come nowhere close to the way these values are expressed by Greeks.

The baker beside my apartment welcomed me back as I was buying bread for breakfast yesterday morning, and wanted not only to assure me that he remembered me but to be assured that I remembered him. In the newsagent, I was asked how long I am here for ‘this time’ – it not only conveys the memory that I have been here before but contains the hope that I would be here many more times too.

The Greek concept of welcome implies that the stranger is becoming a friend. It is not a tourist marketing ploy. It is not a cheap expression of gratitude for return business. It is simply a part of the Greek nature and culture to welcome the stranger or the foreigner. And the Greeks have their own word for it – φιλοξενία (philoxenia).

The Stoics regarded hospitality as a duty inspired by Zeus himself. The word φιλοξενία (philoxenia), from φῐ́λος (phílos), a loved one who is more than a ‘friend,’ and ξένος (xénos), a ‘stranger’ of ‘outsider,’ is used by Plato, Polybius, Philo of Alexandria and others to express the warmth properly shown to strangers, and the readiness to share hospitality or generosity by entertaining in one’s home.

It is a word that is used constantly in the epistles in the New Testament.

Saint Paul speaks of κοινωνοῦντες τὴν φιλοξενίαν διώκοντες (Romans 12: 13), or the importance of contributing to the needs of the saints (those inside the Church) and extending hospitality to strangers (those from outside who must be welcomed).

In Hebrews 13: 2, the author uses the phrase τῆς φιλοξενίας μὴ ἐπιλανθάνεσθε when saying: ‘Do not neglect to show hospitality to strangers, for by doing that some have entertained angels without knowing it.’

To be hospitable (Φιλόξεον, philoxeon or φιλόξενος philoxenos) or to show hospitality (ξενοδοχέω, xenodocheo) occur too in I Timothy 3: 2; Titus 1: 8, I Peter 4: 9, and I Timothy 5: 10. For example: ‘she must be well attested for her good works, as one who has brought up children, shown hospitality (ἐξενοδόχησεν), washed the saints’ feet, helped the afflicted, and devoted herself to doing good in every way’ (I Timothy 5: 10).

One of the requirements of a bishop in the New Testament Church is to be ‘hospitable,’ to be welcoming to strangers (I Timothy 3: 2; Titus 1: 8).

But the NRSV translation shows its weaknesses in these passages. It is not enough to translate the words as hospitality or welcome; it is hospitality towards the stranger, it is welcoming the outsider, the stranger, the foreigner, the person who is different who comes among us. And in the list of priorities, care for others, for children and hospitality to the stranger come before looking after the needs of church members, described here are washing the saints’ feet.

The concept and the duty of philoxenia is in contrast to φιλία (philia), for it is easy to love those who are like us, from the same family or locality, and is in contrast to xenophobia, the fear of the stranger or the other, which is both unfounded and obsessive – and which has grown in Greece in recent decades and found expression in disgusting far-right groups.

The Christian virtue of philoxenia has its roots in the injunctions to hospitality in Leviticus 19: 18 and 34. We are not just to love our neighbours as ourselves, but: ‘The alien who resides with you shall be to you as the citizen among you; you shall love the alien as yourself, for you were aliens in the land of Egypt: I am the Lord your God.’

Despite what is being said in the current debate dividing Anglicanism and many other Christian traditions, the sin of Sodom (see Genesis 19) was to refuse to welcome the stranger. The Babylonian Talmud, Sanhedrin 109, makes it clear. For 1,700 years after the destruction of Sodom, ancient Jews linked the destruction of Sodom to the refusal of hospitality, not to homosexuality.

What we often call ‘hospitality’ is really entertaining, and typically we offer it to friends who will reciprocate by inviting us back. Hospitality to strangers is not entertaining friends or neighbours. Philoxenia is much more than that. Philoxenia turns on its head xenophobia and any other irrational attitude to those who are different, those who are strangers, those who come from the outside.

As always Patrick, I read your blog with interest and certainty that I will learn something new. I had never considered hospitality in quite this way before, but I shall in future