Visiting Silveracre House and learning
about a forgotten Rathfarnham scholar 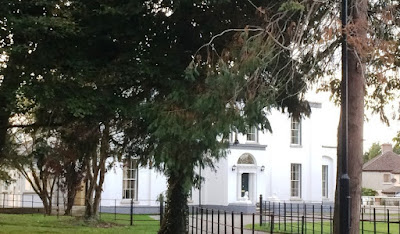 Silveracre House, Rathfarnham ... the former home of James Hentorn Todd has been restored and is on the market with an asking price €1.25 million (Photograph: Patrick Comerford, 2015)

On my way home from work this evening, I called to see Silveracre House off Sarah Curran Avenue in Rathfarnham, which is on sale through DNG with an asking price of €1.25 million.

This is a four-bedroom period house with a floor are of 313 sq metres (3,3369 sq ft). Silveracre House and The Lodge which adjoins it have been renovated and restored recently. The two properties are at the heart of the Silveracre development.

Silveracre House, which dates from the 1830s, is an interesting example in this area of Regency architecture. The original details that have survived in the house include the leaded fanlight above the entrance porch, the granite steps and the two sphinx-like figures mounted on plinths before the entrance door.

The former residents of Silveracre House include the Revd Canon Professor James Henthorn Todd (1805-1869), Professor of Hebrew at Trinity College Dublin, who died here in 1869, and Dr Albert Croly, surgeon and founder of the Baggot Street Hospital and Dublin County Coroner, who lived at Silveracre House in 1898.

Around the middle of the 20th century, the name of the house was changed to Silverton but it later reverted to the original Silveracre. The rear wing of Silveracre House was added in the early 20th century and many of the original features from this period including fireplaces and window shutters. This wing is being transformed into The Lodge at Silveracre.

Most of the land is now built on, but Silveracre House and many of the trees in the grounds are protected. Six new detached houses have been built on the site at Silveracre. 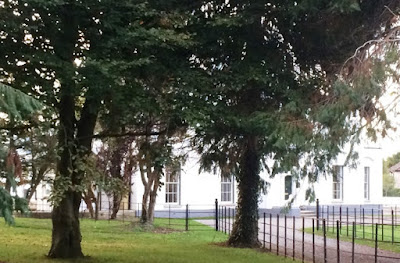 Many of the trees in the grounds of Silveracre House are protected (Photograph: Patrick Comerford, 2015)

Silveracre House stands opposite the entrance to Saint Enda’s Park and is within walking distance of Rathfarnham Village, Grange Golf Club and Marley Park. The restoration work was carried out by Homeland Investments and NColl Construction.

The inner hall, off which the main reception rooms are located, features cornicing and coving. The other period features include restored sash windows, shutters and marble fireplaces. As part of the renovation project, the original wooden floors have been restored and varnished on the ground floor of the house.

The breakfast room connects with the country-style kitchen, with a distinctive curved gable wall facing south with French doors leading out to the south-facing section of the garden. The breakfast room also features a fireplace and there is a pantry/utility room located off the kitchen.

The drawing room, at the opposite end of the inner lobby, features an original marble fireplace, cornice and coving and overlooks the extensive front and side garden of Silveracre House.

There are four bedrooms and a family bathroom upstairs. The master bedroom suite includes a curved gable window facing south and overlooking the mature trees in the grounds. The master suite incorporates an en-suite bathroom and a walk-in dressing room.

But looking at Silveracre House this week, I was particularly interested in the story of one of its most interesting residents in the Victorian era. 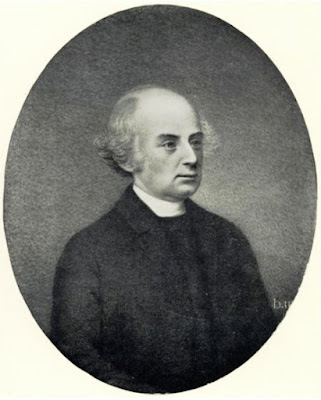 The Revd Canon Professor James Henthorn Todd (1805-1869) was a biblical scholar, theologian, academic and historian. He is noted for his efforts to place religious disagreements on a rational historical footing, for advocating a liberal form of Anglicanism, and for his work as an educator, librarian and scholar in Irish history.

Todd, who was born in Dublin on 23 April 1805, was the son of Dr Charles Hawkes Todd, of 5 Kildare Street (later the site of the Kildare Street Club), Professor of Anatomy and Surgery at the Royal College of Surgeons in Ireland, and Eliza Bentley. He was the oldest of 15 children, and the noted physician Robert Bentley Todd was one of his younger brothers.

Todd entered Trinity College Dublin in in November 1820 at the age of 15 and graduated BA in 1825. But when his father died the following year, James was left with financial responsibilities for his widowed mother and a young family, and his prospects for success seemed to have faded. However, he was able to stay on at Trinity by tutoring and the income he derived from journalism and editing a church periodical, the Christian Examiner.

Todd began publishing in earnest, including papers on John Wycliffe, Church history, and the religious questions of the day.

But what could have been a serious setback to his career came in 1836, when Todd concocted a ‘papal bull’ from Pope Gregory XVI. As a practical joke, he sent it to the evangelical chaplain of the new trustee church in Harold’s Cross. The Revd Robert James McGhee (1789-1872) immediately took the supposed ‘bull’ to the evangelical centre at Exeter Hall, London, where its supposed revelations of papal duplicity caused a public furore.

Was it a forgery or was it a cruel hoax?

Todd was acutely embarrassed and publicly admitted the hoax, pleading that he had assumed no one would take it seriously, and that it was written in the satirical style of Daniel Defoe, who had invented Robinson Crusoe or Jonathan Swift, who had created Gulliver’s Travels. He received comfort and support with a letter from the Archbishop of Armagh, Lord John George Beresford.

Meanwhile, in 1837, he was installed Treasurer of Saint Patrick’s Cathedral, Dublin, despite protests from other chapter members who objected on the grounds of his relative youth and because of his sympathies with the emerging Oxford Movement. Todd’s style of preaching was described as simple and lucid, and his sermons interesting.

In 1838, Newman invited Todd to contribute to his new monthly magazine, The British Critic.

Todd was Donnellan Lecturer in 1838 and 1839, publishing works related to the Antichrist in which he opposed the views of the more extreme of his co-religionists who applied this term to the Roman Catholicism and the Pope. In 1840, he received the degree DD (Doctor of Divinity). That year he also founded the Irish Ecclesiastical Record.

He co-founded Saint Columba’s College in 1843, a school founded to promote the Irish language for those who seeking ordination in the Church of Ireland, as well as promoting the principles of the Church of Ireland. The other founders were Lord Adare, William Monsell (later Lord Emly) and William Sewell of Exeter College, Oxford. The school opened in Stackallen, Co meath, but soon moved to Rathfarnham.

In 1849, Todd became Regius Professor of Hebrew at TCD, a Senior Fellow the following year, and Librarian in 1852. As Librarian, when his office received money, he spent it on the acquisition of manuscripts and rare books, and he deserves much credit for the library’s high ranking as one of the chief libraries of Europe.

Todd reformed many aspects of library procedures, arranged and classified the manuscripts, and began publication of the printed catalogue. As Assistant Librarian, he was responsible for installing mobile shelving on the gallery, and he was instrumental in the professionalisation of librarianship within the college.

His catalogue description drew new attention to the Book of Kells which, until then, was often overlooked in favour of the Book of Durrow. He also helped John Keble in his preparation of his edition of Richard Hooker’s Ecclesiastical Polity.

His literary and antiquarian achievements were no less remarkable. In 1840, Todd co-founded the Irish Archaeological Society and he acted as its honorary secretary. He became a member of the Royal Irish Academy in 1833, and worked actively to acquire transcripts and accurate accounts of Irish manuscripts from foreign libraries for the RIA. He was elected to the RIA council in 1837, was secretary from 1847 to 1855, and for five years was President from 1856 to 1861.

In 1850, Archdeacon Cotton described him as “the sine quo non of every literary enterprise in Dublin.” But his work was widely respected. He was zealous in his study of Irish history and archaeology, and was one of the foremost workers in that great movement for the restoration and reform of Celtic studies.

He worked alongside John O’Donovan and Eugene O’Curry, and classified and arranged the collection of manuscripts. O’Curry described how he endeavoured “to recover for his native country” as large a portion as possible “of her long lost and widely dispersed ancient literary remains.”

He edited for the Archaeological Society the Irish version of the Historia Britonum of Nennius, with a translation and notes, and the Liber Hymnorum. He edited the Wars of the Gaedhill and the Gaill for the Master of the Rolls series.

One of his most important and exhaustive volumes was a Life of St Patrick (1864). He assisted John O’Donovan in the preparation of Edward O’Reilly’s Irish-English dictionary in 1864. He was also a frequent contributor to Notes and Queries.

In 1860, he received an ad eundem degree of Doctor of Divinity at Oxford University. In 1864, he became Precentor of Saint Patrick’s Cathedral, Dublin.

James Henthorn Todd died at Silveracre House in Rathfarnham on 28 June 1869 and was buried in the churchyard of Saint Patrick’s Cathedral, where a Celtic cross marks his grave.

Notes and Queries reported that at the sale of his library, “the books fetched prices far higher than were ever known in Dublin. His Irish manuscripts realized £780.” His interleaved copy of Ware, richly annotated, was bought by the University Library at Cambridge for £450.