The joys of bright, crisp winter days in December 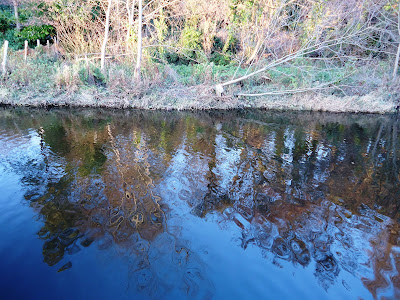 Clear, crisp days with bright blue skies almost make the sharp winter weather bearable. At night, there has been a full moon this week, leaving a glittering frost on the grass. By early morning, the moon has still been high in the sky, but the rising sun has created pink and orange streaks in the sky, and what little cloud there has been has been burnt away by the rays of the sun by mid-morning, even in this winter weather, leaving us with bright days that even offered memories and promises of summer.

There were two working evenings this week, but other evenings offered opportunities to catch up with friends and colleagues.

On Monday night, three of us met up in O’Neill’s of Suffolk Street in Dublin’s city centre, and then moved on the Library Bar in the Central Hotel on Wicklow Street.

We had started training together as chartered surveyors when we were about 18 and fresh out of school. I never finished my training as a chartered surveyor – my freelance contributions to Lichfield Mercury eventually opened career opportunities with the Wexford People and then with The Irish Times.

Of the other two, one is now living on the south side of London, having worked in the Gulf and Hong Kong, and is now training as a tour guide. The second is living in Dublin, but is still travelling for work to places as far away as Ukraine and South Africa at regular intervals. We still meet regularly when we are in the one place at the same time. We are living proof that friendships can last for more than 40 years.

Then, last night [Friday], I was at dinner in the Deanery with other members of the chapter and board of Christ Church Cathedral. Outside, it was frosty but bright. Inside, it was a god evening for catching up with each other too. 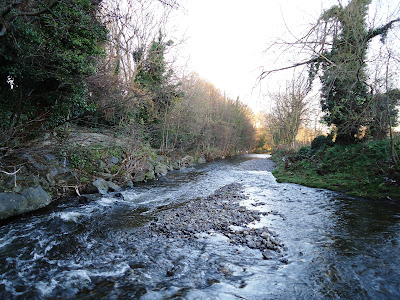 The River Dodder below the walls of the former Bushy Park estate this afternoon (Photograph: Patrick Comerford, 2012)

I realised there never was going to be a walk on the beach this busy weekend. After a working morning with the lay ministry training programme this morning, I eventually left late this afternoon and took a stroll along the banks of the River Dodder from the Ely Arch and the bridge at the High School in Rathgar, through Rathfarnham and along the Shaw estate wall at the perimeter of Bushy Park.

Couples were out walking with children and with dogs, stopping below thr bridge at Rathfarnham to feed the ducks and the swans, while other people were out furtively enjoying the old sunshine and the crisp bite in the air. 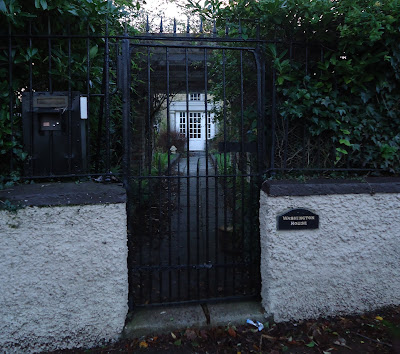 I crossed the Dodder at Rathfarnham Shopping Centre, and walked on along Butterfield Avenue, where one of the hidden architectural treasures of Rathfarnham history, behind high growth and hedges is Washington House, on the corner of Washington Lane.

Local lore tends to believe that between April and July 1803, Robert Emmet lived under the name of Robert Ellis at either Old Orchard House or Butterfield House, further east along Butterfield Avenue, closer to Rathfarnham Village while he was planning an ill-fated uprising. However, a claim can also be made for Washington House and to this day there are debates about which house on Butterfield Avenue Emmet lived in over 200 years ago.

Later, Lewis in his Topographical Directory of Ireland notes in 1837 that the Revd James Burnett, the new curate of Rathfarnham, was living in the house. The house appears on the 1843 Ordnance Survey and is listed in Thom’s Directory (1854) as being occupied by William Boyle. Then from the mid-19th century until about 1916 it was the home of the Grimwood family. 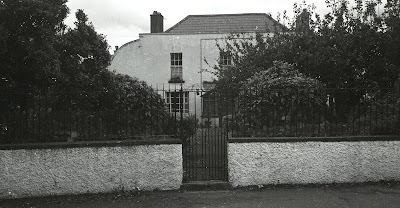 Washington House as it stood a few generations ago

Washington House is a Georgian-style house built about 1742-1760, and still retains its original curvilinear gables. One of its notable features is a four-centred carriage arch in the rear wall of one of the outbuildings. This is a detached, three-bay, two-storey house, the windows have architrave surrounds, the roughcast, rendered walls have a raised parapet, and there is a hipped slate roof with a double gable to the rere and a single brick chimney stack.

By the time I got home the evening was closing in. Advent begins tomorrow, and I am looking forward to the Advent Procession in Christ Church Cathedral tomorrow evening [Sunday 2 December 2012].

Posted by Patrick Comerford at 19:12