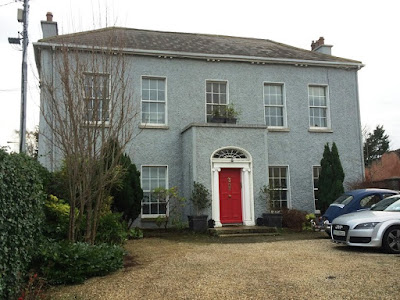 On my way home from work one evening last week, I stopped to admire and photograph another fine house that is part of the architectural heritage of the Dundrum and Churchtown area.

It is easy to pass by without noticing Mountainview House on Beaumont Avenue, and I can find no mention of the house in local histories or in architectural websites. But this a fine, imposing Georgian period residence on c.0.24 acre (0.097 ha) and the house has an interesting history.

In the early 19th century, the village of Dundrum and the surrounding area attracted the “fashionable unwell” from Dublin. Writing in The Beauties of Ireland in 1826, JN Brewer noted that Dundrum “is in a sheltered declivity, sheltered from the harshwinds. The village is the fashionable resort of invalids for the purpose of drinking goats’ whey.”

This probably explains the name of Goatstown to the east of Dundrum, now a residential area around the Goat Grill, at the junction of Goatstown Road and Taney Road. There has been a pub since the early 18th century, and in the 19th century it was popular to travel to Dundrum and Goatstown as goat’s milk was considered to be excellent for people suffering from tuberculosis.

In the early 19th century, Edward Weston Allen (1765-1848) and his wife Eleanor (Barrington) moved from their house at 22 Upper Bridge Street, in central Dublin, where he was a linen draper, to Mountainview House in Dundrum, which they had acquired as their country seat. They also had a large house at No 201 Harold’s Cross Road, where their son the abolitionist Richard Allen was born.

“Bridge St. was a pleasant enough place to go to, but it paled in the delights of Mountain View, the Allen’s country house near Dundrum. It had a large old garden bounded on side by a laurel hedge. Near the entrance there had been a pond, now filled up, but there were tales of Edward and Willie Allen having navigated a washtub round it.”

Eleanor (‘Ellen’) Barrington Allen (1772-1819) was descended from an old Co Wexford Quaker family and she and Edward Weston Allen were married in Dublin in 1798, at the height of the 1798 Rising. It is said that as they walked through the streets after their wedding “the soldiers stood aside to let the procession pass.”

Edward and Ellen first lived in Saint James’s Street Dublin, and later moved to Upper Bridge Street, where he ran a wholesale drapery and linen business. During the summer months they lived in their house in Harold’s Cross.

In 1811, Edward Allen was one of the founders of the Dublin Institution, based in Sackville Street (now O’Connell Street), Dublin. But, despite his involvement in many city charities, Edward Allen lost his membership in the Society of Friends in 1813 because of his persistent refusal over many years to attend Quaker meetings on Sunday mornings.

Ellen and Edward had a large family of 15 children, and she died in 1819, two years after her last child was born. Their children included Richard Allen (1803-1886) the abolitionist and anti-slavery campaigner, who founded the Hibernian Antislavery Association with James Haughton and Richard Davis Webb in 1837.

Edward Weston Allen lived a long life and died at Mountainview on 23 April 1848, in his 83rd year. Jane Toleron wrote:

“Mother and I hastened to the house of grief, and with hushed footsteps went up to the room where the aged patriarch was lying in his last sleep, his long silver hair combed down on each side of his face and resting on a pillow. All was peace, the sun of spring streaming in like a consolation.”

Although he had ceased attending Quaker meetings and had left the Society of Friends, Edward Weston Allen was buried in the Quaker Burial Ground in Cork Street, Dublin.

The Freeman’s Journal, in a news report on his death, noted his engagement with philanthropic causes in Dublin and his involvement with the Cork Street Fever Hospital. 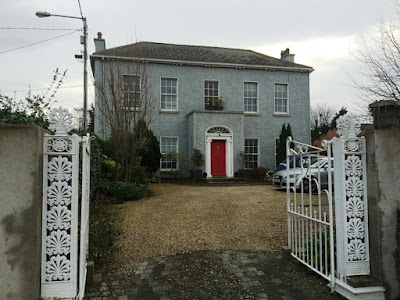 Mountainview House … once the home of the Allen family (Photograph: Patrick Comerford, 2015)

When Mountainview House went on the market recently, the selling agents said it was “ideal for extension or redevelopment potential. Mountainview House is currently in use as a commercial building but could quite easily be returned to residential subject to planning permission.”

In addition to the main house, the sale included a collection of out-buildings, both single and two storey, built to the west of the main house. They range in age and building types and provide storage and workshop facilities. The rear of the property is south west facing benefiting from natural sunlight all day long.

The selling agents said the living accommodation was remodelled within the front half of the house, “which could possibly be extended again subject to planning.”

The present accommodation includes two reception rooms downstairs, a kitchen/sun room, guest WC, and two rooms upstairs. The agents said: “This property would be ideal for someone looking for a large unique family home with plenty of scope to extend in the heart of Churchtown.

There are two entrances to Mountainview House and the property from Beaumont Avenue. The house is close to many amenities, including Dundrum Town Centre, Churchtown village, Nutgrove Shopping Centre, a wide choice of schools, the Luas stations at Windy Arbour and Dundrum, and the M50. 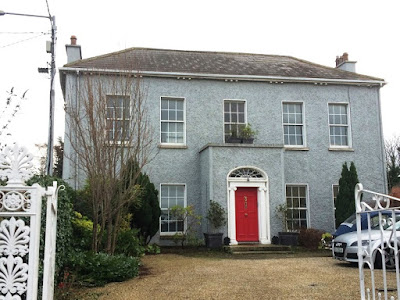