A dower house hidden in the
suburban streets of Terenure

Fortfield Lodge dates from ca 1800 when it was built by Viscount Avonmore as a dower house (Photograph: Patrick Comerford, 2014)

The cherry blossom is in full bloom throughout Templeogue, Rathfarnham and Churchtown, and soon the suburban streets of south Dublin will be covered in colourful dustings of pink and white.

On Friday afternoon, in the middle of a working day and before along working weekend, I took a break and two of us went for a late lunch in Paparazzi, overlooking the Main Street in Templeogue and across the street to Templeogue Tennis Club.

Later, before returning to work, we drove through Templeogue to look at one of the hidden architectural gems in Terenure. Fortfield Lodge, which came at the market last month, was built ca 1790-1805 by Viscount Avonmore as a dower house for his youngest daughter Maria, Anna Maria Yelverton (28 September 1775 – 27 April 1865), married 1791, John Bingham, 1st Baron Clanmorris of Newbrook. It was later mentioned in Wilmot Harrison’s book, Memorable Dublin Homes.

Fortfield Lodge stands a little way off Fortfield Road, approached by Hyde Park. The house originally stood at the back entrance to the now long-demolished Fortfield House, then Lord Yelverton’s country seat. Another former dower house on the estate still exists near Templeogue village, which gives an idea of the extent of Lord Avonmore’s estate.

Barry Yelverton (1736-1805), 1st Viscount Avonmore, was an Irish judge and politician. Initially he was a strong supporter of Henry Grattan, Henry Flood, the ‘Patriot Opposition’ and the Whigs, hoping Ireland could ‘assume the dignity of a nation, and not continue … an insignificant colony,’ and he voiced his support for the American Revolution. He moved to repeal most of the Penal Laws, saying they were ‘disgraceful to humanity.’ Before becoming Attorney-General of Ireland, he gave his name to Yelverton’s Act (1782), which effectively repealed Poyning’s Law.

He was appointed Lord Chief Baron of the Exchequer in 1783, but gravely damaged his reputation for integrity with the execution in 1797 of William Orr for administering the Oath of the United Irishmen to a solider – widely seen as a miscarriage of justice. He later supported the Act of Union, and when he died at Fortfield House in 1805 he was buried in Rathfarnham churchyard.

William Charles Yelverton, 4th Viscount Avonmore (1824-1883), became part of Irish legal history while he was Major William Charles Yelverton and before he succeeded to his family titles. On 15 August 1857, he married his first wife, Maria Theresa Longworth, in Rostrevor, Co Down. They met in Crimea: he was a decorated officer; she had been a nurse at Balaclava, and had become a Rpman Catholic as a consequence of her convent school education in France.

The validity of his first marriage was then tested in the Yelverton case, a 19th century Irish law case that eventually brought about a change in the law on “mixed marriages” in Ireland. Under a Statute of King George II (19 Geo. 2. c. 13), any marriage between a Roman Catholic and a Protestant or a marriage between two Protestants celebrated by a Roman Catholic priest was null and void.

However, on appeal, the decision was reversed on 28 July 1864, when the House of Lords decided that his first marriage was illegal, and therefore his second marriage was valid.

The case brought notoriety and created very mixed feelings. Theresa was alternately vilified and celebrated, portrayed as a victim who had been mercilessly abandoned and accused of being a lascivious seducer. Sometimes she was depicted as innocent and pure, at others as a ruthless social climber. After six years of trials and appeals, she finally lost her case, but in the process had become a minor celebrity. She died on 13 September 1881 in Pietermaritzburg in South Africa, and was buried in the Anglican cemetery.

Many members of the Yelverton family are commemorated in plaques and memorials in Rathfarnham Parish Church, and some are buried in the old churchyard in Rathfarnham village.

The Yelverton titles became dormant in 1910. Although there are heirs male to the titles living in New Zealand, they have not proven their claims to those titles.

Fortfield Lodge was extended and changed during the Victorian era. Originally it would have been only one room deep and it now has 492 square metres and, in its current layout, more reception rooms than bedrooms. Even in the early 20th century there was parkland in front of the house.

In the 1950s, Fortfield Lodge was owned by the Goff family who ran their bloodstock sales from the house.

A decade later, Fortfield Lodge was bought by the hotelier and property developer, the late PV Doyle. He wanted the house for the land it stood on and built houses on the road, doing little to maintain or improve the lodge, which was not a protected structure.

When the current owners bought the house in 1998, it was in a very dilapidated state. The house had been carved up into a warren of flats for several decades and many of its period features were long gone.

Fortfield Lodge was restored under the supervision of Paul Joyce Architect. Over two years he carried out an extensive restoration project and over two years transformed it into a three-bedroom family home with a two-bedroom self-contained apartment in the basement. The house has classical Georgian and Victorian period details, including intricate ceiling cornices, centre roses and chimney pieces.

The enchanting gardens, designed and landscaped by Dominic Murphy and Suzanne Lyons, include formal planting, flower borders, mature trees, a courtyard garden and a walled patio garden and terrace with a pond and summer house.

Today, Fortfield Lodge stands on about one-third of an acre. This gracious and imposing house, close to Terenure College, is within walking distance of Bushy Park, and Terenure and Templeogue villages.

Fortfield Lodge is for sale with Sherry FitzGerald for €2.25 million. 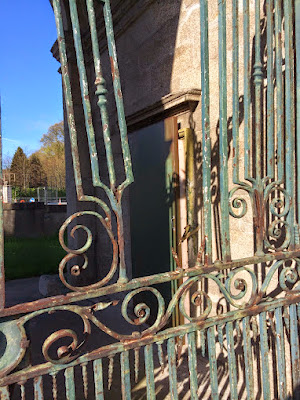 The Ely Arch on Friday morning ... the former entrance to Rathfarnham Castle was built in 1767 but is now sadly neglected in the midst of busy roadworks (Photograph: Patrick Comerford, 2014)

Earlier on Friday morning, after addressing the end-of-term assembly in The High School in Rathagr, I had walked though the school grounds to the banks of the River Dodder on my way back to the Church of Ireland Theological Institute.

The river was shining in the sunshine, but the tranquillity of the setting was interrupted by the road works that have been causing traffic chaos at the junction of Braemor Road and Lower Dodder Road for many weeks now.

It seems such a pity that the local council is paying such attention to these roadworks, but allows the Ely Triumphal Arch that sits in the midst of all these works, to continue to deteriorate and to fall into further dilapidation.

This triumphal arch, which originally led to Rathfarnham Castle, was built to mark the recovery of Rathfarnham Castle and estate by the Loftus family in the second half of the 18th century. The gateway was erected in 1767 by Henry Loftus, Earl of Ely, who was also responsible for the classical redesign of Rathfarnham Castle. After the division of the estate in 1913, the arch became the entrance to the Castle Golf Club, but was later abandoned in favour of the more direct entrance from Woodside Drive.