Fernhurst: the Victorian house that
is ‘the crown jewel of Orwell Park’ 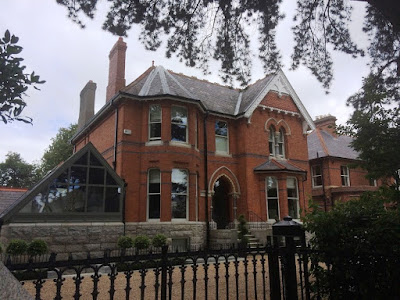 In recent days, I have written about two interesting houses on Orwell Park in Rathgar: No 4, which was once the childhood home of the playwright John Millington Synge, and Dartry House, which as Darty Hall had been the home of the towering business figure of early 20th century Ireland, William Martin Murphy.

But without doubt my favourite house on Orwell Park is Fernhurst or 14 Orwell Park, a grand detached late-Victorian house.

This house was formerly owned by the composer Bill Whelan, and came to public attention when it was sold for €3.795 million two years ago [August 2014]. It was sold through Sherry FitzGerald, and the original asking price was €3.795 million.

When it was on the market two years ago, one newspaper report said Fernhurst is “considered the crown jewel of Orwell Park by many.” But I had a friend from Co Carlow who lived there in the early 1970s while she was a student, and I got to know and appreciate this house about 45 years ago.

Fernhurst is a very fine Victorian detached house with intricate exterior brick and sandstone detailing. A landmark Monterey pine in the front garden shields the house from view.

The house stands on 0.3 acres of grounds, and the property is deceptively large spanning a width that is between double and treble that of the average house on the road.

The Victorian pillar box on the footpath outside Fernhurst (Photograph: Patrick Comerford, 2016)

One of the few remaining Victorian pillar boxes in Dublin, complete with its VR monogram, stands on the footpath immediately in front of the house. I suppose it is appropriate, then, that a vintage postcard of Horse Guards, London, that was sent to Master Kenneth Hope, Fernhurst, Orwell Park, Dublin, and postmarked London 1903, was offered for sale on eBay recently.

Sadly, this pillar box is defaced with graffiti, and like most of those remaining and rare Victorian pillar boxes, this one is in the early stages of neglect and decay. 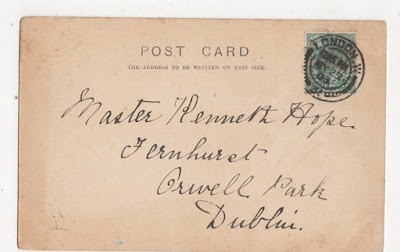 For much of the 20th century, Fernhurst was the home of Robert Grove White, a Cork-born barrister, and his family. His wife Maud died in 1949, he died in 1960, and they are buried in Mount Jerome Cemetery in Harold’s Cross.

The house measures 418 square metres (4,500 sq ft). Victorian tiling outside leads through the Gothic-arched front door and into the fine hall where all the rooms have ceiling heights of more than 11 ft, ornate architraves, pitch pine doors and floors, brass door knobs and fingerplates, as well as great panes of leaded and stained glass.

The windows, while upgraded, retain their original mechanisms and Victorian style radiators heat the rooms.

When the composer Bill Whelan lived there, his baby grand piano sat in the bay window of the double drawing room – a great space with interconnecting doors that slide back to reveal a room to the rear with ornate ceiling plasterwork and a mirror-image bow window.

Bill Whelan is best known for composing a piece for the interval of the 1994 Eurovision Song Contest, Riverdance, the electrifying seven-minute reinterpretation of traditional Irish dance that became a full-length stage production and introduced Irish dancing to international popular culture.

A family room on the other side of the hall is a cosier and equally well-used space. A door off it leads down to the double- height Victorian conservatory with a vaulted glass roof. A set of steel steps goes down to a limestone floored room.

The dining room has had an unusual Venetian plasterwork treatment. A double-height French door leads the eye up to the vaulted ceiling as well as providing a snapshot view of the well-tended gardens.

Adjoining the dining room is a John Daly-designed cherry-wood kitchen that includes a box bay window and window seat.

On the hall return is a double-height stained glass window that floods upstairs and downstairs with warm washes of colour. There is another bedroom on this level.

The three large bedrooms on the first floor all have 11 ft high ceilings. The master bedroom has an en-suite bathroom that includes a separate bath and shower.

The family bathroom at the top of the house is accessed along a minstrel’s gallery and a bank of linen cupboards the size of an average bedroom. The bathroom has garden views.

At garden level, two bedrooms share what the estate agents called a Jack-and-Jill bathroom. There is also a utility area behind a folding door. A den or games room to the rear has French doors leading outside to a granite patio.

The gardens, adjoining Saint Luke’s Hospital, have a high laurel hedge to the rear and is formally laid out and carefully planted.

As I passed Fernhurst earlier this week, the decorators were working in the bay window of the double drawing room, and I was tempted, just slightly, to knock on the door and ask whether I could see that Victorian plasterwork again. 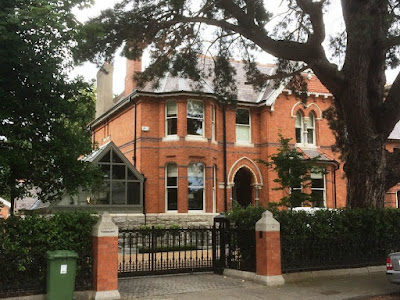 Fernhurst on Orwell Park … I was tempted to knock on the door as I passed by earlier this week (Photograph: Patrick Comerford, 2016)