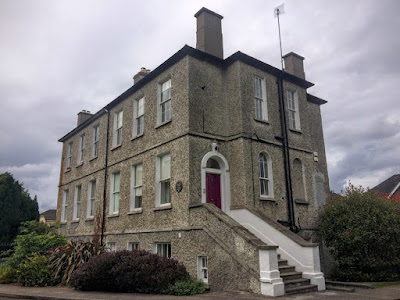 My walks in search of mid-afternoon coffee or on the way home in the evening have led to two unexpected finds of houses in the Churchtown, Rathfarnham and Rathgar area that are associated with the great Irish playwright, John Millington Synge (1871-1909).

Synge was the author of plays, poems and essays, and played a pivotal role in the founding of the Abbey Theatre, alongside WB Yeats and Lady Gregory. His stylised realism set the tone for great writers who followed him, including Sean O’Casey, Brendan Behan and Samuel Beckett. Indeed, Beckett’s novels and plays are often indebted to Synge’s casts of tramps, beggars and peasants.

Around the corner from the Church of Ireland Theological Institute and Braemor Park, Synge House in Newtown Villas is now part of a discreetly-hidden gated community on the corner of Braemor Road.

Edmund John Millington Synge was born on 16 April 1871 in Newtown Little, then described as being in Rathfarnham and now Synge House, No 2 Newtown Villas, Churchtown, Dublin 14. Synge was the youngest son in a family of eight children and spent the first year of his life in this house.

The former country house has been converted into duplex accommodation, with one imposing two-storey-over-basement residence stuck back-to-back to an identical property. Both have steps leading up their main entrances on opposite sides, and have been divided into apartments.

Edmond John Millington Synge was born here in 1871, the youngest of five children. His father, John Hatch Synge, was from a landed gentry family that was seated at Glanmore Castle, Co Wicklow, and moved to Dublin to practice as a barrister.

The Synge family was descended from Edward Synge (1614-1678) from Shropshire, who became Bishop of Limerick and later Bishop of Cork. The family was closely identified with the Church of Ireland over several centuries, providing archbishops, bishops, deans, archdeacons, and clergy in abundance.

The playwright’s branch of the family derived its fortune from John Hatch, the son of Sir William Temple’s agent, who amassed estates in Co Wicklow, Co Meath and Dublin. In Dublin, John Hatch gave his name to Hatch Street, and he owned a townhouse on Harcourt Street that later became the High School.

Francis Synge’s son, John Hatch Synge (died 1845), the playwright’s grandfather, was known as ‘Pestalozzi John’ after the Italian educationalist whose theories he applied in the estate school, incorporating its own printing-press for teaching materials.

The family estate in Co Wicklow was lost by his son, also John Hatch Synge, under the terms of the Encumbered Estates Act of 1848. The family bought back some of the estates at auction in 1850, and his brother Francis Synge re-established Glanmore Castle as the family seat. Both brothers were members of the Plymouth Brethren, which had a stronghold in Co Wicklow.

In 1856, John Hatch Synge married Kathleen Traill, daughter of the Revd Robert Traill, the Rector of Schull, Co Cork, who is described as having spent his life “waging war against popery.” He was the principal of the Schull Relief Committee during the Great Famine, and died of famine fever in 1847. His translation of Josephus’s The Jewish Wars was published posthumously.

Soon after John was born at Newtown Little, his father John Hatch Synge, a lawyer, contracted smallpox, and died in 1872. He was 49 and the child was just a year old. 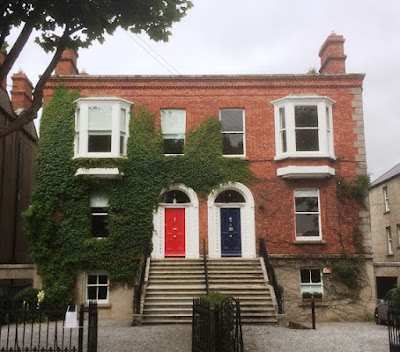 No 4 Orwell Park, Rathgar (right) … the childhood of JM Synge; his grandmother lived in the neighbouring house (Photograph: Patrick Comerford, 2016)

The widowed Kathleen Synge was left with an income of £400 a year from a Galway property, bolstered by annuities for her children from an uncle. She moved to 4 Orwell Park, Rathgar, to be next door to her mother, Mrs Traill, whose house was afterwards occupied by his sister Annie and her family – maintaining the practice of living together as an extended family of evangelical religious temper under the tutelage of Kathleen.

John was always sickly and was kept at home by his domineering mother who tutored him there. Overshadowed by her through most of his early years, he would live with her for most of his life and even take his holidays with her. For her part, Kathleen Synge was her father’s daughter, a dour evangelical who mixed only in devout circles.

A neighbour wrote: “Mrs Synge conducted her household by a rule as strict as that of a religious order and supposed that her children would acquiesce without question.” 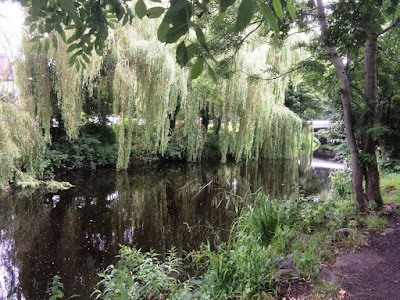 Nevertheless, Synge seems to have had a happy childhood. He developed an interest in nature and in bird-watching as he wandered behind Orwell Park along the banks of the River Dodder, with clusters of wild flowers and a variety of birds and wildlife, and in the grounds of nearby Rathfarnham Castle. Family holidays were spent at the seaside resort of Greystones, Co Wicklow, and at the family estate at Glanmore Castle, Co Wicklow.

The cruel irony for Kathleen Synge was that the long hours of reading she allowed her son to indulge in ultimately took him to Charles Darwin – as a 14 year old he kept The Origin Of The Species hidden under his pillow – and eventually he abandoned his religion completely. 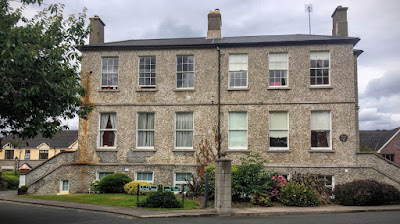 Nos 1 and 2 Newtown Villas … John Millington Synge was born in No 2, the house to the right (Photograph: Patrick Comerford, 2016)

Robert Synge, a brother of the playwright, settled in Argentina as an engineer. Another brother, the Revd Dr Samuel Synge, was a CMS medical missionary in China (1896-1914) with the Church Mission Society (CMS) and the Dublin University Fukien Mission (now the Dublin University Far East Mission), before returning to Co Wicklow as Rector of Deralossary (1923-1951). In his letters to his daughter, he discussed JM Synge’s religious doubts and lack of paternal direction.

A third brother, Edward Synge, became land agent to the Synge estates and later to Lord Gormanston. He was involved in evictions in Galway and Wicklow, causing JM Synge to reproach his mother, to which she replied: “What would become of us if our tenants in Co Galway stopped paying their rents?”

His sister Annie also married a solicitor; an aunt Jane dandled Parnell on her knee and later lamented his politics.

The family later moved to two adjoining houses at Crosswaithe Terrace in Glasthule (Kingstown, Dun Laoghaire), where Mrs Synge continued to instruct her children and grandchildren. She wrote: “John – poor boy ... He had not found the Saviour yet.” He later wrote: “By the time I was 16 or 17, I had renounced Christianity after a good deal of wobbling.”

He studied the violin with Patrick Griffin for two years, and became a student at the Royal Irish Academy of Music, playing the piano, flute and violin and winning awards for counterpoint and harmony.

He entered TCD in 1889 and studied Irish with the Revd James Goodman (1828-1896), an “amiable old clergyman who made him read a crabbed version of the New Testament …” He studied Hebrew in his final year, read George Petrie on Irish antiquities and the Aran Islands, joined the academy orchestra in 1891, and graduated from TCD with a BA (Pass) in 1892.

In 1893, he campaigned against Home Rule in the belief that it would provoke sectarian conflict.

Later, he studied music in Koblenz, Wurzburg and Paris, and then studied literature and languages at the Sorbonne. In 1896, during a return visit to Dublin, he proposed to Cherrie Matheson, the daughter of a leading member of the Plymouth Brethren. Later that year in Paris, he met WB Yeats who encouraged him to visit the Aran Islands.

But in Paris, he also found Maud Gonne’s group – Irlande Libre, with a newspaper of the same name – to be mendacious and gave up attending their meetings. By then, however, he was suffering the first symptoms of Hodgkin’s Disease, and spent much time in hospital.

He travelled to Inishmore and the Aran Islands in 1898, and was invited to Coole Park, where he met Lady Gregory, Yeats, and Edward Martyn that summer 1898. He would spend the late summers of 1899-1902 on the Aran Islands. By coincidence, his uncle, the Revd Alexander Hamilton Synge, had been the Rector of the Aran Island, where he tried to ban Sunday games.

Synge stopped first at Aranmore but soon decided to “move on to Inishmaan, where Gaelic is more generally used and the life is perhaps the most primitive that is left in Europe.” He continued living mainly in Paris, but returned to the Aran Islands regularly.

This was followed in 1902 with two plays, Riders to the Sea and In the Shadow of the Glen, set in Glenmalure, Co Wicklow, near the Synge family home.

He left Paris in 1903 and moved to London. Later that year, In the Shadow of the Glen was staged for the first time by Irish National Theatre at the Molesworth Hall. It was criticised by Arthur Griffith in the United Irishman and other critics in the nationalist press as “a slur on Irish womanhood” and “a vile and inhuman story told in the foulest language we have ever listened to.”

When Riders to the Sea had its premiere in 1904, it was attacked by Patrick Pearse, who described it as “a sinister and unholy gospel.”

He was then living at 31 Crostwaithe Terrace, Glasthule, but he moved to 15 Maxwell Road, Rathmines, later that year.

He was appointed literary adviser to the Abbey Theatre at its foundation in December 1904. He became a director with Yeats and Lady Gregory when the limited liability company was formed in September 1905. His play The Well of the Saints also attacked by nationalists when it was stage at the Abbey in 1905.

Synge spent the summer of 1905 in Ballyferriter, Co Kerry, perfecting his Irish. He moved back to Croswaithe Terrace, in November 1906. At the time, he was writing The Playboy of the Western World, based on the story of a man who killed his father with a [turf-cutting implement.

The Playboy was first produced at the Abbey Theatre on 26 January 1907, with Riders to the Sea as a curtain-raiser, amid riots triggered by the phrase “chosen females in their shifts alone.” At the time, the word “shift” was also used in conversation as reference to Kitty O’Shea and her adultery with Charles Stewart Parnell. The rioters were egged on by a band of Trinity students who sang God Save the King. Theatre seats were torn up, Yeats turned up on the second night to appeal for calm, speaking as “The author of Cathleen Ni Houlihan,” and the Dublin Metropolitan Police were called into the theatre to keep the peace.

But Hodgkin’s Disease was taking its toll. He was working on his play Deirdre of the Sorrows, but spent much time in hospitals and nursing home. He was visited daily by Molly Allgood, aka Máire O’Neill, and they became engaged.

He read the Bible in a brown-paper wrapping during his last days, and he died on 24 March 1909, just short of his 38th birthday, in a private nursing home in Lower Mount Street, Dublin. He was buried in a Synge family grave in Mount Jerome. But the Synge family refused to permit Molly to attend his funeral. Deirdre, which was left uncompleted, was written for her and was performed at the Abbey in January 1910 in a version prepared by Yeats and Molly Allgood.

In his speech accepting the Nobel Award for Literature acceptance speech, Yeats said Synge was “incapable of a political thought or of a humanitarian purpose,” – meaning that he was pure imagination.

In 1927, Vaughan Williams wrote an operatic version of Riders to the Sea, which had its premiere in London in 1937 at the Royal College of Music.

The Abbey Theatre presented Pope John Paul II with a rare edition of The Playboy in 1979, during his visit to Ireland.

Today Newton Villas has been renamed Synge House. No 2 carries a plaque on the outside commemorating Synge’s birth, and Newtown Villas is surrounded by a gated residential scheme.