On the Pugin trail at Keavan’s Port,
the new Wetherspoon’s hotel
in former stained-glass studios 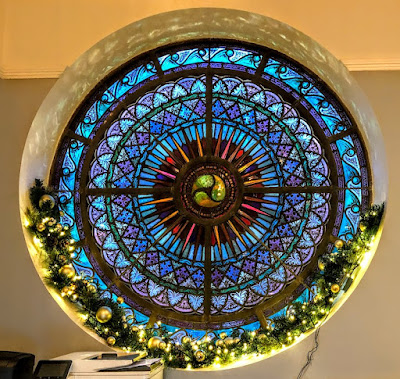 I am spending a few days in Dublin on a short, post-Christmas break. Before a late lunch in Cava in Camden Street yesterday, I visited Wetherspoon’s Keavan’s Port pub and hotel.

I could never describe myself as anything close to a fan of either Wetherspoon’s or Tim Martin – although I admit to having lunch once in the Bole Bridge, the Wetherspoon pub in Tamworth … just once. So Keavan’s Port, a pub with an adjoining 89-bedroom hotel, was never going to be a natural ‘port of call.’

It is always good to have my prejudices challenged and disproved. For some months now, I have wanted to see the restoration of these town houses in Camden Street, including a restored former chapel and the recovery of the story of once-important stained-glass studios. 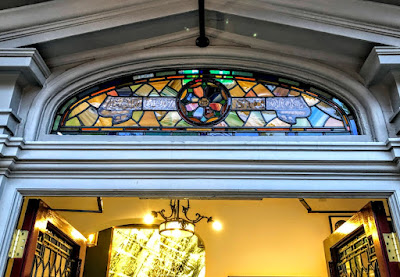 The name of the Earley studios survives in the fanlight above the front door of the hotel (Photograph: Patrick Comerford, 2021)

Keavan’s Port takes its name from the history of the local area, where Camden Street Upper and Camden Street Lower form part of an ancient highway into the city of Dublin. These two streets were previously known as Saint Kevin’s Port.

The name Keavan’s Port and Saint Kevin’s Port comes from Saint Kevin’s Church of, in nearby Camden Row. It is said to have been founded by a follower of the sixth-century hermit.

Saint Kevin also features in the poem ‘Saint Kevin and the Blackbird’ (1996) by the Nobel prize-winner Seamus Heaney, in which he describes how Saint Kevin held out a ‘turned-up palm’ for a blackbird to nest. 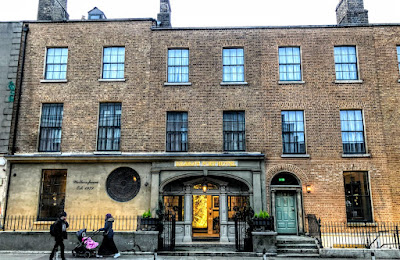 These eight once-derelict Georgian townhouses were bought for €6 million and have gained a new lease of life with their restoration over three years by Wetherspoon as Keavan’s Port pub and hotel. It is a flagship pub and hotel for the British chain, and is the company’s single largest investment in its 41-year history, costing €27.4 million.

The pub is set over two levels and features a courtyard beer garden. The 89 bedrooms include bedrooms specially designed for people with disabilities. Bespoke and reclaimed furniture, as well as reclaimed stonework and decorative windows, have been incorporated into the design. The hotel design fuses the restored Georgian architecture with contemporary design. The unique carpet designs reflect the area’s history, and a three-storey modern extension features a 12-metre-high glazed atrium. 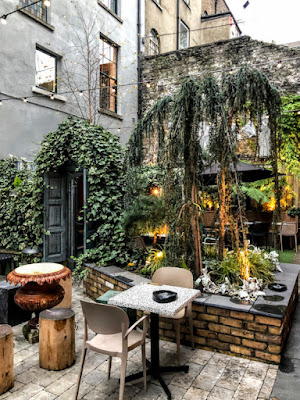 Many of the original features of the once derelict buildings have been be retained and restored, including the circular stained glass window that was crafted by Earley & Co, church decorators, stained glass manufacturers and stone carvers, who were based at the site. The window on the façade of 5 Upper Camden Street is considered to be the work of John Earley, son of the founder of the company.

Earley & Co were ecclesiastical furnishings and stained glass manufacturers and retailers from 1861 to 1975 and one of the largest and most prestigious ecclesiastical decorators both in Ireland and Britain. They provided a high standard of ecclesiastical art during the Gothic revival in church building in the 19th and early 20th century.

The firm was founded by John Earley and his brother Thomas, who were born in Birmingham of Irish parents According to family tradition, their parents were James Earley, a bricklayer from Drumshambo, Co Leitrim, and his wife Elizabeth (née Farrington). 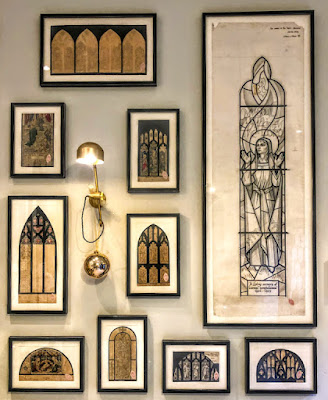 Thomas Earley (1819-1893) was born in Birmingham and was an apprentice at Hardman & Co in Brimingham, who worked closely with the great architect of the Gothic revival, Augustus Welby Northmore Pugin (1812-1852).

John Hardman was one of the pioneers of the stained-glass revival in the mid-19th century. Thomas Earley was responsible for setting up Hardman’s exhibit of stained glass and metalwork at the Great Exhibition in 1851. He set up a similar exhibit at the International Dublin Exhibition of 1853. By November 1853, a shop was being prepared at 48 Grafton Street in Dublin for Hardman’s ecclesiastic products.

The Grafton Street premises were abandoned between 1860 and 1863, and Hardman’s gave up their connection with the Dublin business in 1864. The business then continued from 1 Upper Camden Street as Earley & Powell when Thomas Earley and Edward Powell formed their own business at No 1 Camden Street, calling it Earley and Powell. by 1883 had acquired additional premises at 23-27 Grantham Street, and it later became Earley & Co. 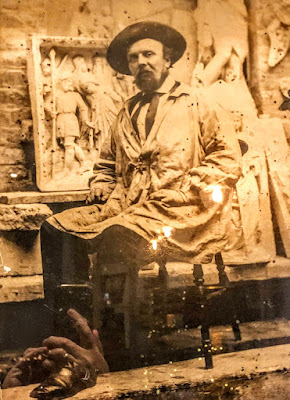 Thomas Earley in 1870 … a photograph in the hotel lobby (Photograph: Patrick Comerford, 2021)

Thomas Earley was elected a non-professional associate of the Royal Institute of Architects of Ireland (RIAI) in 1864, and he became a full associate under in 1869, proposed by Thomas Drew, James Higgins Owen and Parke Neville. He was also a member of the Royal Society of Antiquaries of Ireland (1871).

He worked from 1 Upper Camden Street from 1868 to 1893, and lived at 51 Lower Clanbrassil Street, a street where many members of the Comerford family were his neighbours.

Thomas Earley died at the home of his friend, Father James Baxter, the parish priest of Clondalkin, on 28 June 1893. He left the business to his nephew John Bishop Earley, son of John Farrington Earley. 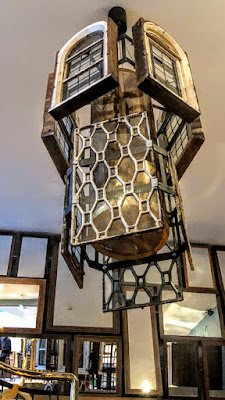 Thomas Earley’s younger brother, John Farrington Earley (1831-1873), was a draughtsman and stained glass designer with Earley & Powell. He was born in Birmingham in 1831, and like his brother worked for the church decorating firm John Hardman & Sons, which was closely connected with the architect AWN Pugin.

He married Elizabeth Bishop in 1853, and they were the parents of seven or eight children, including John Bishop Earley and William Earley. He was a draughtsman and living at 39 Carver Street, Birmingham, in 1856. He was exhibiting with the Birmingham Society of Artists in 1859 and 1860. But he does not appear in the English census of 1861, and by 1862 he was working at Hardman’s branch in Dublin.

Earley was living at 3 Richmond Hill, Rathmines, when he died on 1 September 1873. He was only 41 and was buried in Glasnevin Cemetery. 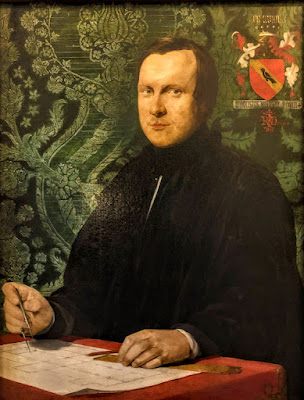 A portrait of AWN Pugin in the hotel (Photograph: Patrick Comerford, 2021)

His eldest son, John Bishop Earley (1856-1953), the stained glass designer and church decorator, was born in Birmingham in 1856. He followed his father into the family business in Dublin, and eventually inherited it when his uncle Thomas Earley died in 1893.

He ran the family business for about 10 years under his own name at 1 Upper Camden Street and 23-27 Grantham Street. Then in 1903, perhaps because of financial difficulties, he took his youngest brother, William Earley, into partnership, and the business was known after that as Earley & Co. John Bishop Earley exhibited designs for stained glass and decorations at the Royal Hibernian Academy in 1887, 1903 and 1904.

He lived at 3 Lennox Street and later at 56 Richmond Street South until his death. He died on 16 March 1935, aged 79, and was buried in Glasnevin Cemetery.

His youngest brother was the stained glass designer Wlliam Earley (1872-1956). He was a student at the College of Art in the 1890s, when he won the Royal Irish Academy’s Taylor Scholarship jointly with William Orpen. Later, he was an apprentice in William Martin & Son’s stained glass, glass and mirror business on Saint Stephen’s Green. He left Martin’s to join his brother John in the family business when it ran into difficulties.

William Earley lived at 56 South Richmond Street, and when died on 23 September 1956 he was buried in Glasnevin Cemetery. 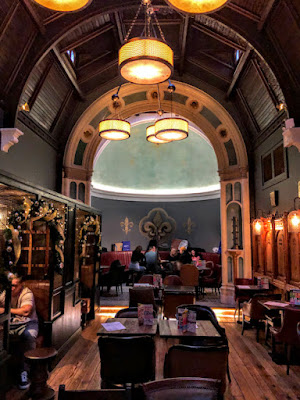 The interior of the former convent chapel, now part of the pub (Photograph: Patrick Comerford, 2021)

The business survived as Earley & Co for many years, and at some time, a Mr Murray, sub-manager of the Northern Bank on the South Circular Road, became a financial partner.

When William Earley died in 1956, his nephew Gerard Earley became managing director, and his niece Dympna Earley and grand-nephew Leo Earley co-directors. The firm remained in business at 4 and 5 Upper Camden Street under the name of Earley Studios Ltd. But the studios closed in 1975, having been run by the Earley family for more than a century.

From the 1890s until the 1940s, part of the terrace was also a convent of the Little Sisters of Assumption, who nursed the ‘sick poor’ in their own homes. Their former chapel is also preserved and forms part of the new pub and hotel. 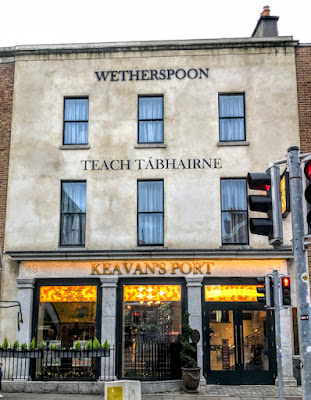 Have to say, I think they have done a wonderful job. The Hardman Cartoons are an unexpected plus, as is the hanging glass. Wonderful to see the photos.
K