Swimming with your clothes on 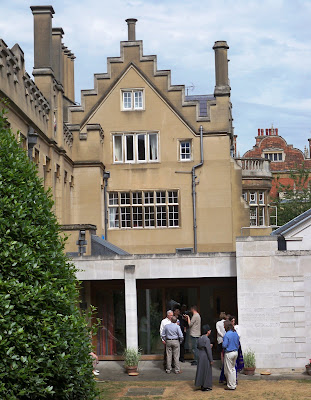 The theme of this year’s summer school in Sidney Sussex College, Cambridge, is “Passion, Human and Divine.” This is the eleventh summer school organised by the Institute for Orthodox Christian Studies, and we were introduced to the topic this morning by Dr Marcus Plested.

Later in the morning, Dr Mangala Frost would remind us of a saying from Saint John Kilmakos in The Ladder of Divine Ascent: “He who dabbles in theology while still in the passions is like one who tries to swim with his clothes on.” We were dabbling in theology this morning, but I hardly felt I was being weighed down to the point of drowning – it was a morning of learning, enlightenment and humour, with theology mixed in good measure with poetry and literature.

Professor Jim Aitken of the Divinity Faculty of Cambridge University, who teaches Old Testament, Hebrew and Second Temple Studies, was our first speaker. Dr Aitken, who is the author of The Semantics of Blessing and Cursing in Ancient Hebrew (Louvain: Peeters, 2007), told us how there is one Hebrew word for blessing in the Old Testament, but 14 words for cursing.

He began by referring to Regina Schwartz’s book, The Curse of Cain: the Violent Legacy of Monotheism, in which she develops her theory of the “myth of scarcity”: if there is not enough land, food, or even the love of God, to go around, then others are denied and conflict is created.

In the Old Testament, jealous and zealous stand side-by-side as images of the divine. Divine anger leads to condemnation, but the anger of human kings, such as Pharaoh, is the anger of inflexible, unchangeable rulers, while God is flexible and compassionate, and his anger is directed at restoring the order and purpose of his creation.

He explored contrasts of God’s anger and the anger of kings in the story of Exodus, the story of Nebuchadnezzar (Daniel 3), Judith and in the Wisdom of Solomon (chapters 17 to 19).

I was intrigued by his insight into the inspiration for the popular Christmas carol Silent Night in the Wisdom of Solomon: “All things were lying in peace and silence, and night in her swift course was half spent, when the almighty Word leapt from thy royal throne in heaven into the midst of that doomed land, like a relentless warrior …” (18: 14-16).

Dr Marcus Plested introduced us to the attitudes to passion in the classical philosophical schools, including Plato, Aristotle, the Stoics and Seneca. He also asked searching questions about the traditions of the impassibility of God, which have been challenged since the 1970s by Jurgen Moltmann.

Later in the morning, Professor David Frost introduced readings of classical texts on the theme of “Passion,” with two readings from Scripture on the Passion of Christ (Isaiah 53; and Mark 14), and three sonnets by Shakespeare (Sonnets 141, 138 and 147):

In faith, I do not love thee with mine eyes,
For they in thee a thousand errors note;
But ’tis my heart that loves what they despise,
Who in despite of view is pleased to dote;
Nor are mine ears with thy tongue’s tune delighted,
Nor tender feeling, to base touches prone,
Nor taste, nor smell, desire to be invited
To any sensual feast with thee alone:
But my five wits nor my five senses can
Dissuade one foolish heart from serving thee,
Who leaves unsway’d the likeness of a man,
Thy proud hearts slave and vassal wretch to be:
Only my plague thus far I count my gain,
That she that makes me sin awards me pain.

When my love swears that she is made of truth
I do believe her, though I know she lies,
That she might think me some untutor’d youth,
Unlearned in the world’s false subtleties.
Thus vainly thinking that she thinks me young,
Although she knows my days are past the best,
Simply I credit her false speaking tongue:
On both sides thus is simple truth suppress’d.
But wherefore says she not she is unjust?
And wherefore say not I that I am old?
O, love’s best habit is in seeming trust,
And age in love loves not to have years told:
Therefore I lie with her and she with me,
And in our faults by lies we flatter’d be.

My love is as a fever, longing still
For that which longer nurseth the disease,
Feeding on that which doth preserve the ill,
Th’ uncertain sickly appetite to please.
My reason, the physician to my love,
Angry that his prescriptions are not kept,
Hath left me, and I desperate now approve
Desire is death, which physic did except.
Past cure I am, now reason is past care,
And frantic-mad with evermore unrest;
My thoughts and my discourse as mad men’s are,
At random from the truth vainly expressed.
For I have sworn thee fair, and thought thee bright,
Who art as black as hell, as dark as night.

Marcus Plested read from Marcus Aurelius, the Roman Emperor who was also a Stoic philosopher. – and played by Richard Harris in Gladiator, and Evagrius of Pontus, who listed eight vices that eventually, in the west, became the seven deadly sins. Evagrius lists gluttony, impurity or fornication, avarice, sadness, anger, acedia, vainglory and pride. In some texts, Evagrius also lists jealousy, a subject he normally does not discuss extensively.

Dr Mangala Frost introduced the treatment of the passions in Hindu texts, including the Bhagavad Gita, and patristic writings, including Saint Augustine on the importance of acquiring a pure heart, and Saint John Klimakos in The Ladder of Divine Ascent.

In particular, I enjoyed her humour as she quoted from The Ladder of Divine Ascent in which Saint John Klimakos said: “He who dabbles in theology while still in the passions is like one who tries to swim with his clothes on.”

She also introduced us to the passions in the poetry of Gerard Manley Hopkins.

Other readings were introduced by Father Alexander Taft, who quoted from Pushkin, and we heard stories from the Middle East too.