The vineyards of Bordeaux have
been green since the 1690s 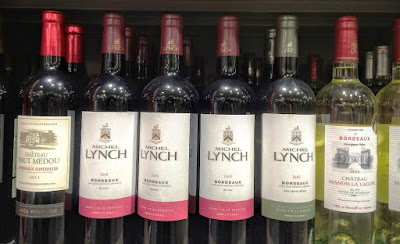 Irish names have been prominent in Bordeaux long before today’s match in the Nouveau Stade de Bordeaux (Photograph: Patrick Comerford, 2016)

Irish fans arrived in their thousands in Bordeaux for today’s match with Belgium in the European championships. The Nouveau Stade de Bordeaux has a capacity of only 42,000, so I wonder how many Irish fans left outside are going to take the opportunity to reconnect with the centuries-old links between Ireland and the capital of French wine?

An Irish College was founded in Bordeaux in 1603, and students there included the historian Geoffrey Keating, and Patrick Comerford who became Bishop of Waterford and Lismore. The college was in the rue du Hâ, a short distance from the Cathedral of Saint André.

But the greatest influx of Irish people in Bordeaux came after the Battle of the Boyne and the Treaty of Limerick. It is said 24,000 men, women and children left Ireland with the ‘Wild Geese’ for France in the 1690s. Many of them made their new homes in Bordeaux, with the Loire Valley and Cognac close behind.

… the Wild Geese
Spread a grey wing upon every tide. 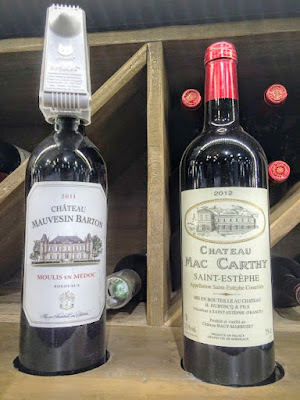 Barton and MacCarthy were among the leading Irish names in the châteaux of Bordeaux (Photograph: Patrick Comerford, 2016)

The Irish immigrants quickly immersed themselves in the wine trade, and soon they were exporting wine back to Ireland. The Wild Geese of Bordeaux were among the most innovative wine-making pioneers of the 18th century and in time became known as the Wine Geese.

A century later, when Thomas Jefferson was the first US Ambassador in France, he visited Bordeaux in the 1787. There he noted that the leading wine merchants on the Quai des Chartrons were Irish families with names that included Gernon, Barton, Johnston, Foster, Skinner, Coppinger and MacCarthy.

The most powerful man in the city was the wine-broker Abraham Lawton, whose family came from Skibbereen in West Cork. Other well-known ‘Irish Wine Geese’ families include Kirwan, Clarke, Dillon, Phelan, Hennessy and Lynch.

These Irish families came to own important properties too. Perhaps the two most important Irish families in Bordeaux are descended from John Lynch from Galway, who founded Château Lynch-Bages, and Thomas Barton, who first prospered as a négociant before founding Château Langua-Barton and Château Léoville-Barton.

John (or Jean) Lynch was one of the original Wild Geese who fled Ireland in 1691. His family prospered and became one of the leading families of Bordeaux. His son, Thomas Lynch, who took possession of the Château Lynch-Bages when he married into the Drouillard family in 1750.

Michel Lynch, who was born in 1754, devoted his life to improving the wines on the Lynch-Bages estate. A shrewd wine producer, he was one of the prime movers in advances in viticultural in the end of the 18th century, in particular with the early trials of de-stemming or separating the stalk and pips before fermentation.

In the mid-18th century, claret was the popular tipple of the day. England was importing 1,000 tons of claret, Scotland 2,500 and Ireland 4,000. So, in the early 18th century, Dublin was importing more casks from Bordeaux then the whole of England and Scotland combined. Nathaniel Johnston from Armagh had cellars in Bordeaux that that held the equivalent of six million bottles.

Philip Stanhope, 4th Earl of Chesterfield, who was Lord-Lieutenant of Ireland in 1745-1746, observed: ‘One gentleman in ten in Ireland are impoverished by the great quantity of claret which, for mistaken notions of hospitality and dignity, they think it necessary should be drunk in their houses.’ He added: ‘The affectation of drinking wine has got into the middle and lower ranks of people.’

Château Lynch-Bages was for many years the favoured tipple of businessmen, property moguls and diplomats, who could remember and pronounce the name with ease.

Basil Fawlty (John Cleese) once said in Fawlty Towers: ‘Most of the guests who stay here wouldn’t know the difference between Bordeaux and Claret.’

In all, there are 14 châteaux, 10 streets, one wine commune and a public monument in Bordeaux with Irish names. The monument commemorates the Irish-French President of France, Patrice MacMahon (1873-1879), whose family came to Bordeaux from Co Limerick. While the proud home of claret is turning green for today’s second Euro 2016 fixture against Belgium, the vineyards of Bordeaux are proudly proclaiming their Irish roots. Michel Lynch wines – available in red, white and rosé – constitute the best of the Bordeaux wines for every vintage (Photograph: Patrick Comerford, 2016)