A day on Spinalónga and in the Bay of Mirabello 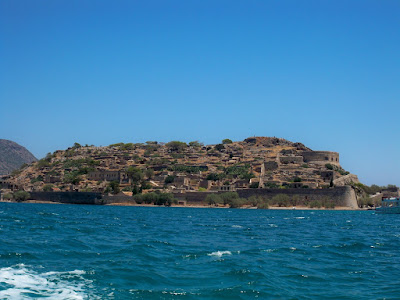 The success of Victoria Hislop’s The Island has increased the popularity of day trips to Spinalónga (Photograph: Patrick Comerford, 2010)

The success of Victoria Hislop’s book, The Island, is a matter of pride for many people in Crete. The book may be fiction, but it restores the lost dignity and retells the sad stories of many people who were forced into internal exile on the tiny island of Spinalónga (Σπιναλόγκα) when they were diagnosed with leprosy, living the rest of their days in social isolation.

Since the publication of The Island, day trips to Spinalónga have become increasingly popular. That popularity is going to grow now that Mega Channel in Greece is producing a miniseries for television based on Victoria Hislop’s book and is due to be broadcast in October

I took the bus to Aghios Nikólaos yesterday morning, and from there I made my way along the coast of the Bay of Mirabello to the small fishing port and resort town of Eloúnda (Ελούντα), where ferries leave every hour for Spinalónga.

Originally, Spinalónga served as a strategic Venetian fortress, guarding the waters around the northern shores of eastern Crete and protecting the bays of Mirabello and Eloúnda.

This massive fortress was long considered impregnable and withstood Turkish attacks longer than the rest of Crete. It finally fell to the Ottomans in 1715 – a full 40 years after they had captured everywhere else in Crete. 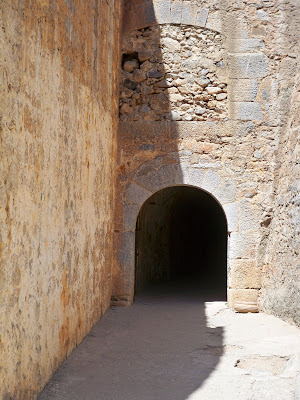 The lepers’ entrance to Spinalónga was through a tunnel known as Dante’s Gate, because patients did not know what was going to happen to them once they arrived (Photograph: Patrick Comerford, 2010)

The last Turkish inhabitants left the island in 1903, and for over 50 years Spinalónga was a leper colony. This was the last remaining leper colony in Europe until it closed in 1957.

The last Turkish inhabitants left the island in 1903, and for over 50 years Spinalónga was a leper colony. The former mosque became the colony hospital, and conditions were fearsome if not cruel. The lepers’ entrance was through a tunnel known as Dante’s Gate, because the patients did not know what was going to happen to them once they arrived. Relatives found it difficult to get permits to visit family members. The patients’ clothes could not be brought off the island for washing. Only the doctor could send out any post, once he had disinfected the letters. Fishing was forbidden, the dead were buried on the island instead of their home villages, a yellow flag was flown each day as a warning to passing boats, and petty rules governed every aspect of daily life.

The last inhabitant, a priest, stayed on to look after funerals and memorial services for another five years. He finally left in 1962, and ever since the island has remained uninhabited.

It takes less than an hour to walk around the island, using the suggested route. There is no overnight accommodation, but – after circling the full island – the small boat took only 15 or 20 minutes to make the return journey to Eloúnda. 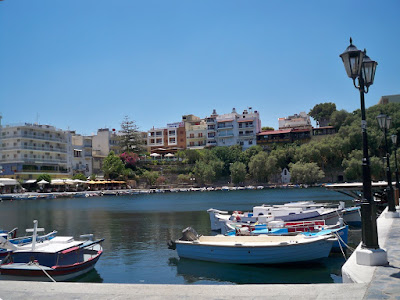 Back in Aghios Nikólaos (Άγιος Νικόλαος), I had lunch in Okeanós, which prides itself on serving authentic Greek food in the midst of all the restaurants and cafés encircling Lake Voulisméni (Λίμνη Βουλισμένη). Local lore says this is a bottomless lake, but it is in fact 64 metres deep and it drains into the nearby harbour through a small channel dug in 1870.

A long and lingering lunch by the shores of Lake Voulisméni (Photograph: Patrick Comerford, 2010)

It was a long and a lingering lunch. Looking out on the lake, I could have stayed here for hours on end, enjoying the view and watching the passing tourists.
Posted by Patrick Comerford at 08:00 1 comment: