Saint Fin Barre’s Cathedral, Cork … a triumph by William Burges, one of the greatest of the Victorian architects (Photograph: Patrick Comerford, 2013)

After a busy working week in England, visiting theological colleges in Oxford and Nottingham and spending All Saints’ Day in Lichfield Cathedral, I spent the weekend in Cork, taking part in the installation of the Revd Ted Ardis as Dean’s Vicar of Saint Fin Barre’s Cathedral on Sunday [3 November 2013].

I stayed overnight in Jury’s Inn on Anderson’s Quay, and despite the overnight rain woke on Sunday morning to bright reflections on the River Lee below my hotel room.

Sunday morning by the banks of the River Lee in Cork (Photograph: Patrick Comerford, 2013)

I took an early morning stroll by the banks of the River Lee and through the city centre before returning to breakfast. Later in the morning, I was in Saint Fin Barre’s Cathedral for the Choral Eucharist, which also celebrated All Saints’ Day – my second All Saints’ Day celebration in a three-spired cathedral in three days.

Ted and Hilary Ardis offered a delightful tour of their new home. The former Deanery, where I was the guest of previous deans many years ago, is to be known as the vicarage. Its full-length windows offer framed views of the neighbouring cathedral.

After lunch in the Quay Co-op on Sullivan’s Quay, I was back in Saint Fin Barre’s Cathedral in the afternoon for Choral Evensong and Ted’s installation, at which I was invited by the Dean, the Very Revd Nigel Dunne, to read the second lesson (Hebrews 11: 23 to 12: 2).

A cathedral is said to have stood on this site overlooking Cork and the estuary of the River Lee since the seventh century, named after Cork’s patron saint. Legend says Saint Fin Barre came from Gougane Barra, at the source of the River Lee. It is said he came to the marshes of Cork in the year 606 and founded a monastery and a monastic school on the site of the present cathedral. He died in 623 and is said to be buried in the graveyard somewhere near the east end of the present cathedral.

The mediaeval cathedral was rebuilt in the 18th century, but the cathedral of 1735 was never well-liked and the Dublin Builder described it as “a shabby apology for a cathedral which has long disgraced Cork.”

Even before the disestablishment of the Church of Ireland, a competition was held for building a new Saint Fin Barre’s in 1862. It was to be the first new Anglican cathedral built in these islands since Saint Paul’s Cathedral in London.The Victorian architect William Burges (1827-1881) was declared the winner in February 1863. He was only 35 and he records his success with two triumphal words in his diary: “Got Cork!” The cathedral accounts record his winning prize was £100.

Work on building the new cathedral began that year. What remained of the mediaeval cathedral and its 17th century rebuilding were demolished in 1865, along with the surviving ruins of the Augustinian house of Saint John the Evangelist, later known as Gill Abbey. Bishop John Gregg laid the foundation stone in 1865.

Burges designed a compact yet impressive cathedral in the Early French Gothic style, narrow inside but soaring to a great height, with three spires – one at the crossing and two others at the west end. The cathedral is built of Cork limestone and the interior of Bath stone and the walls are lined with red Cork marble. 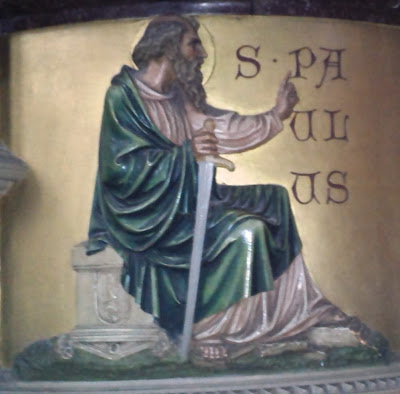 Burges oversaw all aspects of the design and work, including the architecture, the altar, the pulpit, the bishop’s throne, the chapter stalls, the statuary, the stained glass, designing all the sculptures, mosaics, furniture, metalwork, church fittings, so that the cathedral preserves a remarkable unity of style throughout.

The stained glass windows progress from the Old Testament at the west end through to the New Testament in the ambulatory. On the pulpit, the four evangelists are joined by Saint Paul, who is seen sitting on an upturned pagan altar.

Throughout the cathedral, there are numerous gargoyles and embellishments. Outside, on each side of the west door, are figures representing the wise and foolish virgins – the dejected foolish virgins holding their empty lamps – as they approach the bridegroom (Matthew 25: 1-13).

When Burges died in Kensington on 20 April 1881 he was only 53. But building, carving and decoration continued at his cathedral well into the 20th century, long after his death. His gift to his new cathedral is the Resurrection Angel, made of copper covered with gold leaf, crowning the sanctuary roof at the east end.

The gold-leafed angel crowning the sanctuary roof is a gift to the cathedral from William Burges (Photograph: Patrick Comerford, 2013)

Posted by Patrick Comerford at 19:50 No comments: