The ‘field trip’ ended with a lively discussion in the churchyard at Saint Brendan’s Cathedral, Clonfert (Photograph: Patrick Comerford)

The following half-page news report and photographs are published in the current [July 2018] edition of ‘Newslink, the Diocesan Magazine in Limerick, Killaloe and Ardfert:

A large group of priests and readers visited the three cathedrals in the united dioceses as part of the diocesan programme of training and education in ministry. These three cathedrals function in a variety of ways, from city cathedral to parish church, to a church in a rural setting. Each has a unique story and historical dimension and attracts tourists for very different reasons.

The field trip began in Saint Mary’s Cathedral, Limerick, where Noreen Ellerker brought the group on a tour of the cathedral, which is celebrating its 850th anniversary. She introduced the history of the cathedral, from its foundation in 1168, to recent changes and innovations introduced by the Dean, the Very Revd Niall Sloane.

In Killaloe, Co Clare, the group was taken on a tour of Saint Flannan’s Cathedral by the Dean, the Very Revd Gary Paulsen, and climbed the cathedral tower for views of Saint Flannan’s Oratory and sweeping, breath-taking views of the River Shannon, before enjoying lunch in the town.

The field trip continued on by road to Saint Brendan’s Cathedral, Clonfert, Co Galway, with its unique Hiberno-Romanesque doorway and the grave of Saint Brendan. The visit concluded with a celebration of the Eucharist.

During the day, the participants crossed the Shannon many times, and travelled through all three provinces and many of the counties embraced by this diocese.

‘This was an interesting way to get to know and understand the different dimensions of cathedral life in our dioceses,’ said Canon Patrick Comerford, who organised the day. ‘The best way to learn history is to visit the very places where history was made and to experience it at first-hand. We saw sites associated with the early Celtic church and saints, the Viking invasions, and the Anglo-Norman and mediaeval churches, as well as seeing the changes made to these buildings as the needs and fashions of liturgy and worship changed over the centuries.’ 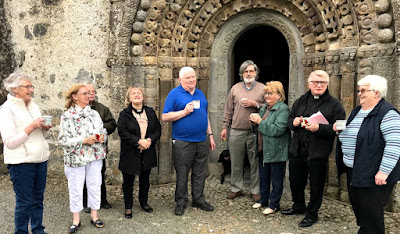 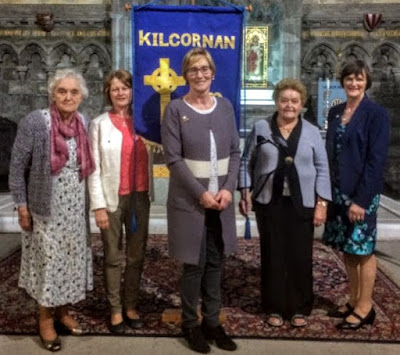 Ieverstown House is
250 years old and
needs a little imagination 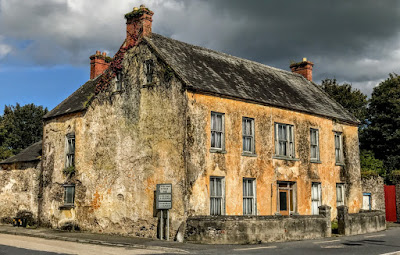 Ieverstown House on Fair Green, Sixmilebridge … now on the market but in need of restoration (Photograph: Patrick Comerford)

Ieverstown House, facing the Fair Green in Sixemilebridge, Co Clare, is a fine old town house, built around 1730-1770, and standing on a prominent corner site in a pretty market town.

When I visited Sixmilebridge about nine months ago [September 2017], I noted that this is a curious detached, five-bay, two-storey house with dormer attic, and while ‘it now seems to be crumbling, it must have been an attractive townhouse in the past.’

Now Ieverstown House has come on the market for sale by private treaty and with an asking price of €290,000.

Although the house was occupied until recently, it is in need of rextensive repair, restoration and renovation work. Yet, this is an interesting opportunity for someone to buy an interesting Georgian house in the heart of Sixmilebridge yet within commuting distance of Limerick, Shannon, Ennis or even Galway.

Sixmilebridge is often referred to locally as ‘The Bridge’ and the full time in Irish is Droichead Abhann Uí gCearnaigh (‘Bridge of the River of O’Kearney’). The ‘six-mile’ part of the name alludes to the fact that this place is about six Irish miles from Thomondgate in Limerick. Donough O’Brien, 4th Earl of Thomond, built the bridge in 1610 – and from then until 1804, when the bridge at Bunratty was built, traffic between Limerick and Ennis passed through Sixmilebridge.

The village has wide streets and large squares that were laid out by the O’Brien family from the 17th century. By the end of the 17th century, development was linked to the industrialisation of the area as people of Dutch origin found the river very suitable for milling. The east of the village was once its commercial part, with water powered mills, a brewery, a market house and a fair green.

According to local tradition, the fatal duel between Daniel O’Connell and John d’Esterre in 1815 arose from Daniel O’Connell’s refusal to pay the toll. However, the duel arose from a speech by O’Connell to the Catholic Board in 1815, when he described the Dublin Corporation as beggarly. At the time, d’Esterre was near bankruptcy and took this as a personal insult. He challenged O’Connell, and died two days after the duel at Bishop’s Court, Kildare.

Many of the old buildings in Sixmilebridge have been preserved and have found new uses.

The former Church of Ireland parish church of Kilfinaghty, dating from 1810 and designed by the Pain brothers, was restored in 2001 and is now an award-winning library.

The Old House Bar, which stands opposite Ieverstown House on Fair Green, was built around 1775. This was the birthplace in 1917 of Dr Brendan O’Regan, who had the vision for developing much of the Shannon Region. The Mill Bar on Frederick Square dates from around 1770, but has a stone plaque reading ‘Frederick Square 1733.’ The former woollen mills are now apartments.

An attractive feature in Sixmilebridge is the highly decorated but functional ‘duck inn’ on the O’Garney River, close to Ieverstown House. This is a floating raft with glass windows and painted walls. It houses the ducks during winter and is also where their locally consumed eggs are hatched and collected. It forms part of the tourist trail of Sixmilebridge.

Ierverstown House is for sale through Sherry Fitzgerald O’Donovan of Shannon, Co Clare. 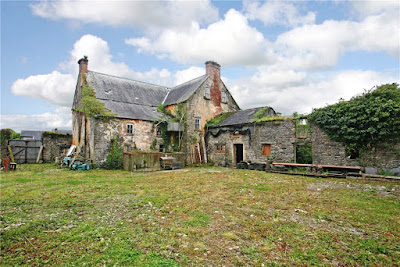 Ieverstown House … in need of restoration, but with potential (Photograph: Sherry Fitzgerald O’Donovan)