The Odyssey of sailing from Anatolia to a small Greek island

Sailing to Kastellórizo from Kaş ... an Odyssey as well as an ordeal (Photograph: Patrick Comerford, 2011)

If Homer’s Odyssey is the story about the efforts of Odysseus and his companions to get back from Anatolia to their Greek island, then this past week has been an Odyssey and a time when it appeared everything possible was going to prevent me from getting from Anatolia to a Greek island ... to any Greek island.

First my planned trip to Rhodes on Monday was cancelled; then I was told it was postponed and I could have it rebooked. But when I went to rebook it on Tuesday, all I was offered was an afternoon sailing, with a return journey to Fethiye on Wednesday morning. This would involve cancelling a planned visit to Kastellórizo, the most remote of the Dodecanese islands and the most southerly and easterly part of Greece.

And so I chose to stick to my decision to go to Kastellórizo, an island I had never visited before. I would return another day and revisit Rhodes and write some of the stories I had in my imagination.

The ticket to Kastellórizo had been booked with the tour operator since last Friday. It was an early start from Ovacik, in the pine-covered hills above Fethiye ... I had been woken by the call to prayer from a nearby mosque, and four of us set out without even waiting for breakfast.

The journey took us through some of the most beautiful and some of the richest farmland in south-west Anatolia, and we passed by sites whose names are so important in Lycian and classical history ... Tlos, Pinara, Xanthos, Letoon, and Patara ... and then though Kalkan, before stopping briefly at Kaputaş Beach and the end of the gorge. 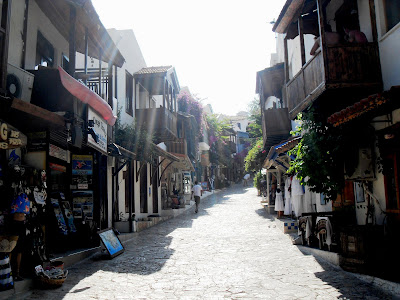 Kaş ... a charming town on the south coast of Turkey, between Fethiye and Antalya (Photograph: Patrick Comerford, 2011)

By the time we arrived in Kaş (pronounced “cash”), a small fishing, diving, yachting and tourist town on the southern coast of Turkey, the place was alive and buzzing.

But immediately there was hint that something was amiss.

We were told our bookings had been made too late. Last Friday was too late?

We were told our bookings had not been confirmed. Since when? By whom?

We were told our names had arrived too late for clearance with the harbour master in Kastellórizo. But surely last Friday gave enough time?

We were told there was not enough space on the ferry. Then why us?

The arguments continued, the ferry sailed, we four were left at the dock.

Would you like to have a rebooking tomorrow? No, I’m flying to Dublin on Thursday.

Well the ferry has gone. I’m the customer, I’m the tourist, I booked last Friday. Who made a mistake? Who made the wrong call? Which story I’ve been told is true, and which is a lie?

Eventually, we were offered passage for three on a small Greek caique, leaving at 1.30 p.m. But there were four of us.

It was now after 11. Two of us opted for the shorter visit.

In all, we spent over four unplanned hours in Kaş. And I have never been in a town in Turkey that is as beautiful and that is so like a Greek town of the same size.

But then this was once Antiphellos or Andifli, and in 1923 the whole population of ethnic Greeks were expelled in their thousands by the Turkish authorities to Greece.

We visited the Greek amphitheatre, the Greek temple, the Lycian sarcophagi and rock tombs, and a Greek Orthodox church that has been mutilated and turned into a mosque after being abandoned for 40 years. We strolled through the side streets and alleyways, bought almonds, and had lunch in Meyden before sailing to Kastellórizo on the Marco Polo. On board we could see there was enough room for at least two or three more.

On Kastellórizo, two of us had less time than we expected. But the journey was worth it. As the Greek poet CP Cavafy wrote in Ithaka:

As you set out for Ithaka
hope the voyage is a long one,
full of adventure, full of discovery.
Laistrygonians and Cyclops,
angry Poseidon—don’t be afraid of them:
you’ll never find things like that on your way
as long as you keep your thoughts raised high,
as long as a rare excitement
stirs your spirit and your body.
Laistrygonians and Cyclops,
wild Poseidon—you won’t encounter them
unless you bring them along inside your soul,
unless your soul sets them up in front of you.

Hope the voyage is a long one.
May there be many a summer morning when,
with what pleasure, what joy,
you come into harbors seen for the first time;
may you stop at Phoenician trading stations
to buy fine things,
mother of pearl and coral, amber and ebony,
sensual perfume of every kind—
as many sensual perfumes as you can;
and may you visit many Egyptian cities
to gather stores of knowledge from their scholars.

Ithaka gave you the marvelous journey.
Without her you would not have set out.
She has nothing left to give you now.

We walked the pier, visited the churches, watched turtles, were amazed by the crumbling mansions, and sipped retsina and shared a Greek salad in Athena on the quayside.

On the 25-minute journey back to Kaş from Kastellórizo on the Turkish ferry, I counted at least 35 or more empty places – the other two could have travelled with us; instead they plan to return today. We came back, all four of us, on the same route, stopping to photograph the beautiful beach at Kaputaş.

There was a full moon over Fethiye last night as I had dinner in Arena, close to the Greek amphitheatre. I fly back to Dublin today. Hopefully that journey is less adventurous, even if it is longer.

Meanwhile, the story of Kaş and the story of Kastellórizo are so compelling that I’ll wait a little while before telling them in detail.
Posted by Patrick Comerford at 06:00 No comments: