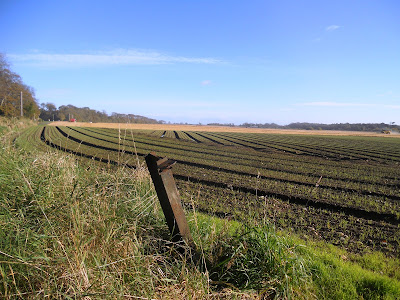 Harvest work was at an intense pace in the autumn sunshine in Donabate this afternoon (Photograph: Patrick Comerford, 2012)

Am I allowed to have my favourite field?

I don’t want it to appear that I am mimicking a character in a John B Keane play. But I have a few favourite fields. And one of them is in the Kilcrea area of Donabate, on Hearse Road, opposite the main entrance to Newbridge House.

This is a large, open, broad field, and in the bright autumn sunshine this afternoon it was being worked with intensity as the harvest season comes to a close.

The warning signs for oncoming traffic said there was mud on the road. But as I stepped into the field I realised that there was mud in the field too from the long wet summer. There were deep furrows filled with water, but there was plenty of machinery taking advantage of the bright and sunny day. 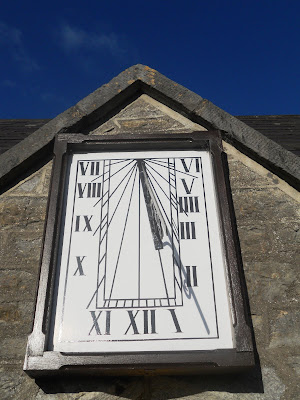 We stopped again in Donabate, for there was enough sunshine to appreciate the design and planning of the sundial over the south porch at Saint Patrick’s Church. 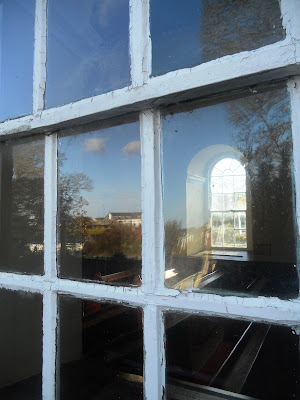 After visiting my Lynders cousins at the Quay House in Portrane, we parked at Tower Bay, beside the Martello Towers (No 7 Tower) and set out to walk along the cliff path to Donabate. 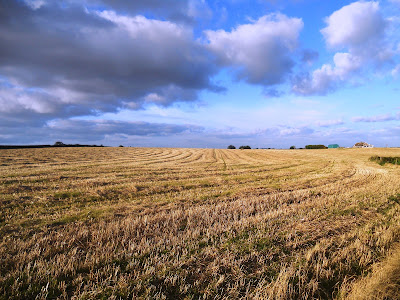 A bright field between the cliffs at Portrane and Saint Ita’s Hospital (Photograph: Patrick Comerford, 2012)

To our right, there was another broad, open, yellow field that stretched out between us and both Saint Ita’s Hospital and the Round Tower built in 1844 as a memorial to George Evans of Portrane House. Out to the east, the clear sunshine gave us uninterrupted views of Lambay Island and Howth Head.

The cliff walk is narrow and twisting, and at times there are sheer drops down to the rocks and the narrow sandy coves below. 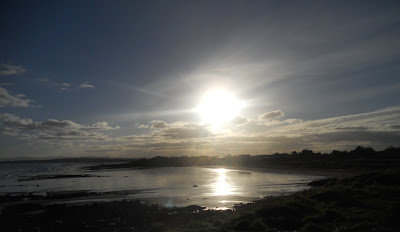 The setting sun cast its sparkles across the sand and the water at Donabate this afternoon (Photograph: Patrick Comerford, 2012)

Along the cliff walk, we met many families out enjoying the weekend holiday sunshine. As we neared the end, the slow-setting sun was bright in the sky and casting a silver sparkle across the sands and the sea.

Waiting on the terrace, enjoying the seaview, in Donabate (Photograph: Patrick Comerford, 2012)

We stopped at the Waterside House Hotel, and were told we could wait on the terrace to have our food orders.

But we enjoyed the seaview.

A slight chill was coming into the autumn evening. And we headed back along the cliffs to Tower Bay in Portrane.

The full blue colours had faded from the sky. Off the coast, Lambay Island was still clear to see, but the sea water was now a grey-green colour.

As we headed home there was still a hint of autumn colours in the sky. And they were still working in the big field across the road from Newbridge House.