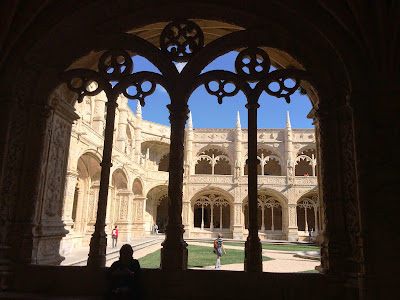 The cloisters of the Mosteiro dos Jerónimos in Belém (Photograph: Patrick Comerford, 2014)

I had forgotten in many ways how Portugal was once a maritime power with an expansive empire that spread across the world. Although there is a Mediterranean feeling about Lisbon, the city faces out to the Atlantic, and I was reminded of Portugal’s imperial past and rich maritime history on my second day in Lisbon yesterday [5 November 2014].

We caught the bus early in the morning from Praça do Marquês de Pombal to the Praça do Imério and the Archaeological Museum at Belém, to visit the cloisters of the Mosteiro dos Jerónimos and the church.

Belém takes its name from Bethlehem, and the monastery was first was built by the Henry the Navigator around 1459. Manuel I chose the Hieronymite monks for the monastery, so that they would pray for the king’s soul and provide spiritual assistance to navigators and sailors who left from the beach of Restelo to discover the world.

These hermit monks lived according to the Rule of Saint Augustine, but modelled their lives on Saint Jerome, the fifth-century hermit who lived in a cave in Bethlehem and translated the Vulgate version of the Bible. They wore a white tunic with a brown, hooded scapular and a brown mantle as their habit. 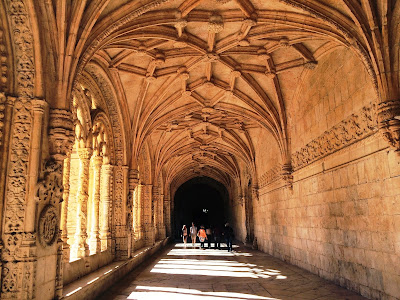 In the cloisters in the Mosteiro dos Jerónimos (Photograph: Patrick Comerford, 2014)

The monastery was built at the beginning of the 16th century in the Manueline style by Diogo de Boytac and Jerónimo de Ruao. This is one of the most visited sites in Lisbon, and it stands as a monument to Portuguese cultural identity and a celebration of Portugal’s explorations and expansion in that century.

We first visited the Cloisters, which were begun by Diogo de Boytac and finished by João de Castilho and Diogo de Torralva.

The refectory is a long, narrow, vaulted dining room on the west side of the cloisters.

The monastic chapter house in the north-east corner of the cloisters was only completed in the 19th century after the order had been suppressed by the Portuguese government, and is now a shrine to Alexandre Herculano, a 19th century historian and politician.

Steps on the south side of the cloister lead to the gallery that looks down to the main chapel. 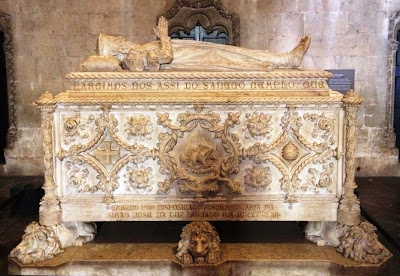 The tomb of Vasco de Gama in the north choir of Jerónimos (Photograph: Patrick Comerford, 2014)

After leaving the cloisters, we entered the chapel through the majestic south door, richly carved with Biblical figures, saints, and key Portuguese characters, including Henry the Navigator.

The chapel dates from 1572, and houses the tombs of many 16th century royal figures. The nave of the church has soaring pillars supporting the fan-vaulted ceiling, and at the west end is the tomb of the explorer Vasco da Gama. 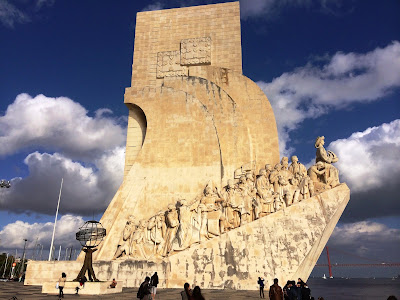 Remembering a maritime and imperial past … the Padrão dos Descobrimentos (Photograph: Patrick Comerford, 2014)

We later crossed under the railway line to the Padrão dos Descobrimentos, with its monument to the Discoveries, facing out to the sea.

It was erected in 1960 to mark the 500th anniversary of the death of Henry the Navigator and takes the form of the prow of a ship, with great figures from Portugal’s past carved on each side. It is a reminder that Portugal’s empire once spread from Brazil to Macau, and included the Cape Verde Islands, Angola, Mozambique, Goa, Ceylon and Tmor.

After lunch at Nosolo Italia on the waterside, we walked down to the Torre de Belém, built originally on an island in the Tagus to guard the entrance to the harbour of Lisbon. Today it is isolated in its beauty, and looks almost like a Disneyland fantasy. 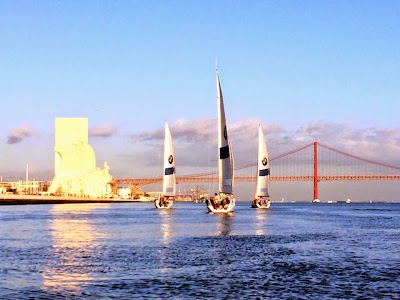 On the River Tagus in the late afternoon (Photograph: Patrick Comerford, 2014)

From the little moorings beneath the Torre, three of us joined a sailing tour along the waterfront with Artisan Cruises, and spent an hour on the water enjoying the views and the delights of the sailing and maritime traffic that passed us by.

Darkness was falling when we decided to take the 20-minute ferry from Belém to Porto Brandão. This little place is mentioned in none of the guidebooks that I had to hand, but in the darkness it looked like a charming fishing village with a tiny beach.

We had dinner in Catedral dos Fondues e Carvoadas, which was welcoming and specialised in seafood, before catching the ferry back, and catching the Metro to Sao Sebastião and our hotel. 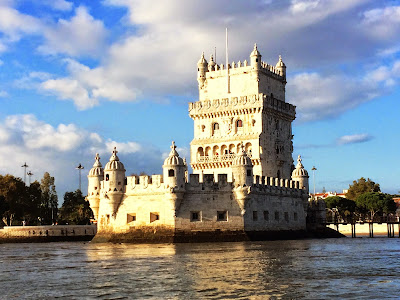 Posted by Patrick Comerford at 11:32 No comments: