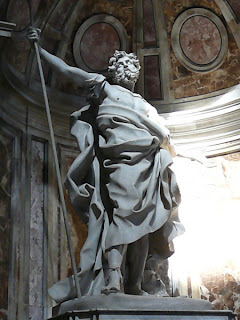 Longinus is the name given in mediaeval and some modern Christian traditions to the Roman soldier who pierced Christ’s in his side with a lance after he died on the Cross. However, this solider is not named in the Gospels. The name Longinus is first found in the Gospel of Nicodemus that was appended to the apocryphal Acts of Pilate.

Nevertheless, whether or not the story of Longinus is the stuff of legend, just two weeks away from Good Friday, his commemoration today [15 March] is a reminder of the passion and death of Christ.

Traditionally, he is venerated as a saint in the Roman Catholic Church, the Eastern Orthodox Church, the Armenian Apostolic Church, and many other traditions. The Longinus legend further identifies this soldier as the centurion present at the Crucifixion, who testified: “Truly this man was God’s Son!” (Matthew 27: 54; Mark 15: 39).

The legend of Longinus grew over the years to the point that he was said to have converted to Christianity after the Crucifixion. His name is probably a Latin derivation from the Greek lonche (λόγχη), the word used for the lance in John19: 34: “ἀλλ'εἷς τῶν στρατιωτῶν λόγχῃ αὐτοῦ τὴν πλευρὰν ἔνυξεν …, instead, one of the soldiers pierced his side with a spear …”

Later legends claim Saint Longinus was born in Cappodocia, or born in the small village of Lanciano, in the present Abruzzo region of Central Italy. He was badly wounded in a battle, and as a consequence he was almost blind, and was mocked for his near-blindness by his fellow soldiers.

However, he was healed when some of the blood and water from Christ’s side fell on his eyes. He subsequently left the army, took instruction from the apostles and became a monk in Cappadocia.

He was arrested in Cappadocia for his faith, his teeth were forced out and his tongue cut off. However, Saint Longinus miraculously continued to speak clearly and managed to destroy several idols in the presence of the governor. The governor, who was made blind by the demons that came from the idols, had his sight restored when Saint Longinus was being beheaded in AD 45, because his blood came in contact with the governor’s eyes.

However, but as the Revd Sabine Baring-Gould says in The Lives of the Saints (1914): “The name of Longinus was not known to the Greeks previous to the Patriarch Germanus, in 715. It was introduced amongst the Westerns from the apocryphal Gospel of Nicodemus. There is no reliable authority for the acts and martyrdom of this saint.”

The Holy Lance was revered at Jerusalem by the sixth century, but neither the centurion, nor the name Longinus, appears in any report at the time.

In the Middle Ages, it was claimed that the body of Longinus was found in Mantua in 1304. The body was taken to the Church of San Augustine in the Vatican. Pope Francis I’s Inagural Mass in Saint Peter’s Basilica on Tuesday next [19 March] may draw more attention to the lance of Longinus, said to be preserved in one of the four pillars over the altar in the basilica, and Bernini’s statue of Saint Longinus in one of the four the niches at the crossing.

In the movie The Greatest Story Ever Told (1965), John Wayne has a cameo role as Longinus, whose Feast Day is 15 March, although the Armenian Apostolic Church commemorates him on 22 October. 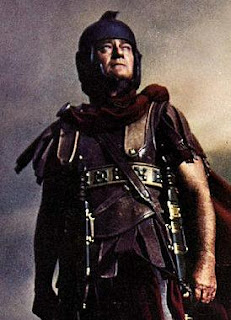 John Wayne as the Centurion in The Greatest Story Ever Told