A reflection on the Crucifixion 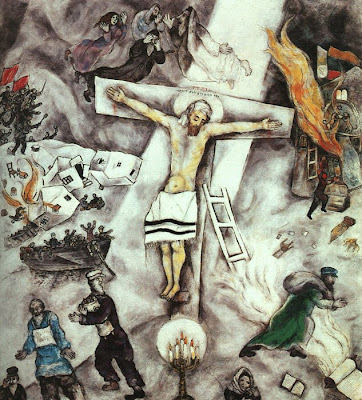 In preparation for Good Friday, I have chosen as as an early reflection the White Crucifixion by Marc Chagall (1887-1985), who was one of the most successful artists of the 20th century. His work included paintings, book illustrations, stained glass, stage sets, ceramic, tapestries and fine art prints. Picasso once said: “When Matisse dies, Chagall will be the only painter left who understands what colour is.”

Chagall was born in Belarus, and worked for much of his life in France. He painted the White Crucifixion in 1938 to draw attention to a recent series of political events perpetrated by the Nazis in Germany.

Both as a Jew and as an abstract artist, Chagall was a target of Hitler’s art censorship policies. His dealer in Germany, Herwarth Walden, was forced to close his Berlin gallery (Der Sturm) in 1932, to cease publishing his influential newsletter, and to flee to the Soviet Union.

In 1937, the Nazis undertook a systematic inventory of modern art in German museums, removing 16,000 works they deemed unacceptable, to destroy or to sell outside the country. Four works by Chagall were included in the “Jewish” room of the infamous “Degenerate Art” exhibition staged in Munich at the end of 1937. The exhibition mocked deviations from Nazi art standards.

Meanwhile, anti-Jewish policies in Germany escalated to an unthinkable level. Following the September 1935 laws curtailing the civil rights of Jews, the Nazis took a Jewish census in 1938 and registered all Jewish businesses as a preliminary move in their plans for ethnic genocide.

In June and August of that year, the synagogues in Munich and Nuremberg were destroyed, and these anti-semitic atrocities reached a climax on “Crystal Night,” 9 November. In reaction, Chagall conceived a painting of the martyrdom of the Jew Jesus as a universal symbol for religious persecution.

Instead of a crown of thorns, the Jesus in Chagall’s painting wears a head-cloth and a prayer-shawl around his loins.

The round halo around his head is repeated by the round glow around the Menorah at his feet.

Mourning his persecution, figures of the Hebrew patriarchs and the matriarch Rachel appear in the smoke-filled night sky. Around the cross, Chagall shows a bleak snow-scape with horrific scenes of contemporary Germany.

In the background to the right, a soldier opens the doors of a flaming Torah ark removed from a pillaged synagogue, the contents of which litter the foreground.

The flag above the synagogue and the soldier’s armband were originally decorated with inverted swastikas.

One of the fleeing figures in the foreground at the left wears a sign that originally bore the inscription Ich bin Jude" (“I am a Jew”).

In the background above, a ship full of refugees is trying but failing to flee a burning village that has been destroyed before the arrival of liberating soldiers from Soviet People’s Army carrying red flags. This last detail was wishful thinking, motivated by the antagonism of Stalin’s government toward Hitler’s before 1939.

The White Crucifixion was intended to raise awareness of the events in Hitler’s Germany and their implications for humanity in general. The painting was included in an exhibition of Chagall’s works in Paris in early 1940.

It appears the artist decided to paint over the most explicit historical details after the invasion of France in May 1940 or after the German occupation of Paris, which began that June.

Chagall fled the first occupied zone for Marseilles, and then escaped to the US. He lived there until 1948, when he returned to Paris. He died in France in 1985, the last surviving master of European modernism, outliving Joan Miró by two years.

The White Crucifixion was given as a gift to the Art Institute of Chicago by Alfred S. Alschuler in 1946.
Posted by Patrick Comerford at 18:00 No comments: