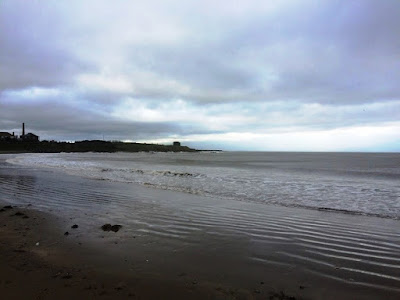 Storm Frank has swept across these islands and town and villages across Ireland, Scotland and northern England have been devastated by the high winds, heavy rains and swollen rivers that have burst their banks.

The River Bracken, which flows through Balbriggan, was flowing fast through Balbriggan this afternoon, its waters deep brown and heavy, its pace determined, but the river channel is well banked up and it looks like it never threatened to break its banks as it rushes down to the harbour.

The River Bracken is known locally at ‘The Canal’. It once formed a lake in the town, but this was reclaimed through land-fill in the early 1980s to form a public park and the car park where we parked.

However, local tradition says the true Irish name of the town is Baile Brigín, meaning the “Town of the Little Hills,” a reference to low hills surrounding the town. Others say the town’s name means Breaga, the area of a tribe or clan known as the Bregii tribe.

We parked in the car park where the small lake could be found until the 1980s. On the hill above us stood Saint George’s, the Church of Ireland Church founded over 200 years ago for the growing town the Revd George Hamilton of Hampton Hall, in the face of opposition from the Rector of nearby Balrothery.

The Railway Viaduct and the Lifeboat House built into one its eleven arches are two of the best-known landmarks in Balbriggan (Photograph: Patrick Comerford, 2015; click on photograph for a larger image)

We crossed the car park, and walked through the round-headed arches of the fine railway bridge onto the small beautiful sandy beach beside the harbour.

The harbour was built by Baron George Hamilton of Hampton Hall in 1761 and is still a working harbour, although fishing vessels and sail boats were all tied up this afternoon and there was no sign of any activity.

William Dargan’s eleven-arch Railway Viaduct and the Lifeboat House built into one the arches are two of the best-known landmarks in Balbriggan. The viaduct was completed in 1844 as part of the Dublin to Drogheda line and was officially opened in March that year.

The Lifeboat House was once used to smoke fish and was later used as a storehouse. It is built of rubble stone with dressed limestone surrounds to the openings. It is said the upper part of the building was designed to provide sleeping quarters for the cox swain who gave up using it because of the noise of trains overhead. It has a fine slate root with a dormer window set into the apex at the front.

The original plaques with the date and initials of the station are placed on either side of the main entrance. However the rear of the building is covered with graffiti, and this part of Balbriggan’s architectural heritage needs attention. 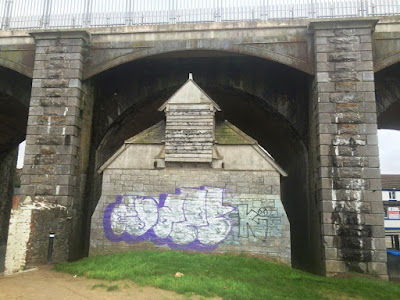 Although Storm Frank had calmed down, but the waves were beating strongly against the beach.

The Front Beach is a natural inlet and crescent shaped, fitting neatly between a headland crowned by a Martello Tower to the north, the harbour to the south, and to the west the hills on which the railway viaduct is built.

This was probably my last walk on a beach for the year 2015. Two friends had invited us to lunch, and we stayed on until darkness fell. As we left, gentle lighting was highlighting the architectural beauty of Balrothery Church. 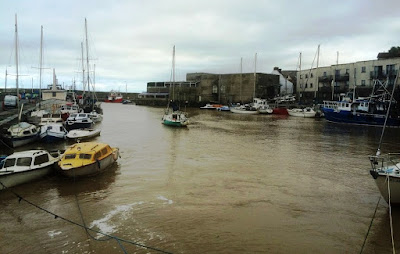 Calm after the storm … the Harbour in Balbriggan this afternoon (Photograph: Patrick Comerford, 2015)

Christmas with Vaughan Williams (7):
‘Hodie’, 10 and 11, Narration and Lullaby

‘Sweet was the song the Virgin sang’ ... the Nativity icon in the Lady Chapel in Christ Church Cathedral, Dublin (Photograph: Patrick Comerford, 2015)

During this Christmas season, I am inviting you to join me each morning in a series of Christmas meditations as I listen to the Christmas cantata Hodie (‘This Day’) by the great English composer Ralph Vaughan Williams (1872-1958), drawing on English Christmas poetry from diverse sources, including poems by John Milton, Thomas Hardy and George Herbert, that reflect a variety of Christmas experiences, and the narration of the Nativity story in the Gospels.

This morning [30 December 2015], I invite you to join me in listening to the tenth and eleventh movements of Hodie, which include a short reading from Saint Luke’s account of the Christmas story, and a Christmas Lullaby.

The tenth movement is a narration that is a short citation from Saint Luke’s Gospel (Luke 2: 19):

But Mary kept all these things, and pondered them in her own heart.

The eleventh movement of Hodie is a lullaby scored for soprano and women’s chorus. This lullaby is based on an anonymous text that is also known in a setting by Benjamin Britten:

Sweet was the song the Virgin sang,
When she to Bethlem Juda came

And was delivered of a Son,
That blessed Jesus hath to name:
“Lulla, lulla, lulla-bye,
Sweet Babe,” sang she,

And rocked him sweetly on her knee.

Who hath vouchsafèd from on high
To visit us that were forlorn:
“Lalula, lalula, lalula-bye,
Sweet Babe,” sang she,
And rocked him sweetly on her knee.