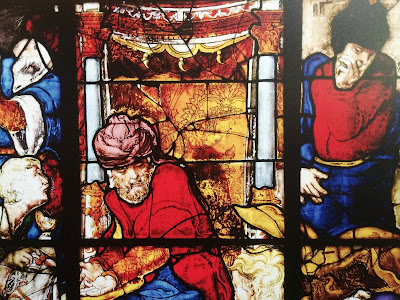 When I was back in Lichfield Cathedral at the weekend, the Lady Chapel was closed off and the east end of the cathedral was covered in scaffolding. It was good to see that the re-installation of the Herkenrode windows is now well underway and on course for completion by March.

Exhibition boards at the entrance to the Lady Chapel detail the restoration project and recall the story of the Herkenrode windows.

The Dean of Lichfield, the Very Revd Adrian Dorber, told the Lichfield Mercury recently: “The return of the Herkenrode Glass is a monumental event at the cathedral.”

The appeal for the restoration of the Lady Chapel and the Herkenrode stained glass had a target of raising £3.7 million, and I was told at the weekend that all but £30,000 of this target figure has now been raised.

Because of the success of the campaign, work to the masonry of the south and north quire aisles has been completed, badly eroded external stonework has been restored, replaced or strengthened, and gargoyles and grotesques have been repaired sensitively. All this work reaches its completion in a few weeks’ time with the re-installation of the Herkenrode windows in March.

Last year [2014], the fund-raising campaign included the efforts of Lichfield Cathedral School in the Michaelmas Term, when the Cathedral was the school’s Charity of the Term. Activities such as pop-up restaurants have raised over £1,500 for the restoration work.

The windows were bought by Lichfield Cathedral to replace mediaeval stained glass that was destroyed during the English Civil War.

But, while the cathedral has survived centuries of political and religious upheavals, the glass came under threat because of the effects of the weather and pollution, as well as crumbling masonry in the Lady Chapel.

The mediaeval pinnacles and buttresses were so weathered there were fears that the failure of any one buttress could have led to the catastrophic collapse of the wall and roof and shatter the glass.

The collection was removed for restoration in 2010 and preparatory work began on the Lady Chapel.

The glass was made between 1532 and 1539 for a Cistercian nunnery, founded about 1182 by Count Gerard of Loon at Herkenrode in Flanders, now part of modern Belgium. The nunnery attracted the nobility whose families gave generously to sponsor the windows.

It is said he produced his sketches for the windows in his Antwerp workshop after he visited both Rome and Constantinople, and the glass was manufactured in Flanders. In a very special way, the glass encapsulates the values and practices of life in the Renaissance period, and the central role of religion and culture. The subject matter is partly narrative covering the life of Christ and partly portraying donors praying before an altar or image, often with a personal patron saint to intercede.

The glass remained in Herkenrode until the abbey was dissolved during the Napoleonic Wars, when Napoleon dissolved religious houses throughout Europe. The glass was the bought in 1801 by Sir Brooke Boothby (1744-1824), a member of the Lunar Society and the intellectual and literary circle in Lichfield that included Anna Seward, Richard Lovell Edgeworth and Erasmus Darwin and a close friend of Jean-Jacques Rousseau.

Boothby’s great-grandparents, William and Hill Boothby, owned the Moat House, the Jacobean house in Lichfield Street, Tamworth, once owned by the Comberford family.

Boothby translated the first part of Rousseau’s three-part autobiographical Confessions and published it in Lichfield in 1780. 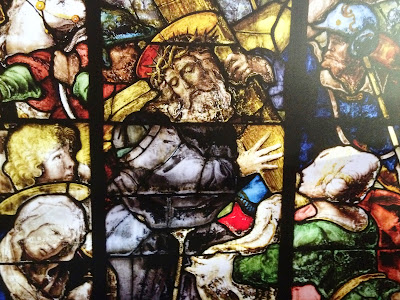 As the restoration project began, the Dean of Lichfield said: “The story of the glass, of its ruin and rescue, serves as a powerful metaphor in this Cathedral Church of the death and resurrection of Jesus which stands at the heart of the Christian faith. These windows are breath-taking.”

The glass was removed in 2010 and taken to Barley Studios for work on the conservation project. Funding from trusts, foundations and generous individuals allowed the glass to be removed and the masonry to be repaired.

When the Herkenrode Glass was removed to safe storage, clear isothermal glass was installed temporarily, and the Lady Chapel was filled with a new light on bright sunny days. The glass is now being fitted in new tungsten brass frames, and it will be protected by clear glass.

The staff at the cathedral are planning a programme of celebratory events once the re-installation of the windows is complete in March. 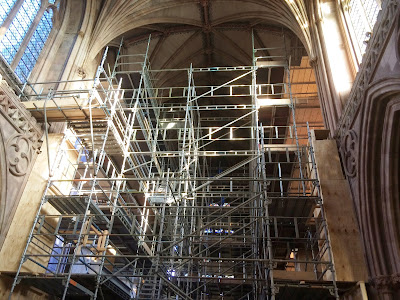 Meanwhile, Herkenrode Abbey is going through its own form of restoration, and the site of the former monastery of Cistercian nuns in Kuringen, in the Belgian province of Limburg, is protected as a national historical monument and landscape. Since 1972, some of the surviving buildings have been home to a community of the Canonesses of the Holy Sepulchre. The community has built a new monastery, retreat centre and the Church of the Risen Lord, which now serves the canonesses and their guests.