Two Co Cork churches
and the beginnings of
steeplechase racing 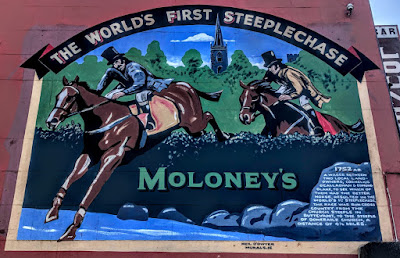 A mural on the gable end of Moloney’s pub in Buttevant, Co Cork, boasts how the world’s first-ever Steeplechase was run from Buttevant and Doneraile in 1752 after a hunt, when a local man, Edmund Blake, challenged his neighbour Cornelius O’Callaghan, to race across country from Buttevant church steeple to Doneraile church steeple, a distance of four miles away (6.4 km).

The church steeples of Saint John’s Church, Buttevant, and Saint Mary's Church, Doneraile, were chosen so both riders could see their finish point all along the route and stay on track to the end.

Blake and O’Callaghan raced along the banks of the Awbeg River, jumping over stone walls, ditches and hedges along the way.

History does not record who won the bet, and little did they know their sport would still be thriving 2½ centuries later.

The race, from steeple to steeple, gave birth to steeplechasing – also known in Britain and Ireland as national hunt racing. It is also popular in Canada, the US, Australia and France.

In addition, this part of north Cork also gave its name to the Doncaster St Leger, which is named after Anthony St Leger, an army officer and nephew of Arthur St Leger, 1st Viscount Doneraile.

Anthony St Leger devised a flat race, first run in 1776. It is the world’s oldest classic race and set the pattern for classic racing throughout the modern world. 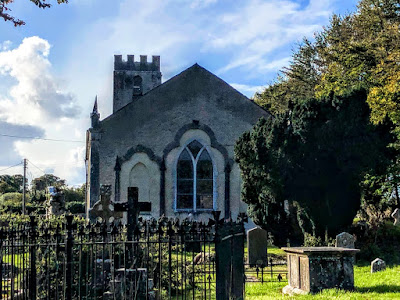 The tower of Saint Mary’s Church, Doneraile, no longer has a steeple (Photograph: Patrick Comerford, 2020)

The modern usage of the term ‘steeplechase’ differs from country to country. In Ireland and Britain, it refers only to races run over large, fixed obstacles, in contrast to ‘hurdle’ races where the obstacles are much smaller. The collective term ‘jump racing’ or ‘National Hunt racing’ is used when referring to steeplechases and hurdle races collectively – although, properly speaking, National Hunt racing also includes some flat races.

In other parts of the world, ‘steeplechase’ refers to any race that involves jumping obstacles.

The first recorded steeplechase over a prepared track with fences was run at Bedford in 1810, although a race had been run at Newmarket in 1794 over a mile (1.6 km) with 5-ft (1.5 m) bars every quarter mile (400 m). The first recorded steeplechase of any kind in England took place in Leicestershire in 1792, when three horses raced eight miles from Barkby Holt to Billesdon Coplow and back.

The first recorded hurdle race took place at Durdham Down near Bristol in 1821. There were five hurdles on the mile-long course, and the race was run in three heats.

The first recognised English National Steeplechase took place on 8 March 1830. The 4-mile (6.4 km) race, organised by Thomas Coleman of St Albans, was run from Bury Orchard, Harlington in Bedfordshire to the Obelisk in Wrest Park, Bedfordshire.

Most of the earlier steeplechases were contested cross-country rather than on a track, and resembled English cross country as it exists today.

Today, the world’s most famous steeplechase is the Grand National, run annually at Aintree Racecourse in Liverpool, since its inception in 1836. The first official race was held three years later.

Saint John’s Church in Buttevant was rebuilt in 1826 and is now closed, while Saint Mary’s Church in Doneraile no longer has its steeple. The 260th anniversary of the first steeplechase in 1752 was marked in Donraile in 2012 with a re-enactment of the steeplechase from Buttevant Church to Doneraile. 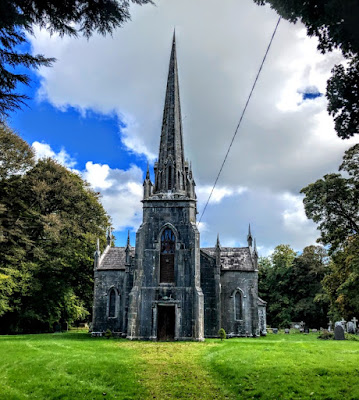 Colourful buildings in
Buttevant under blue
skies and autumn sun 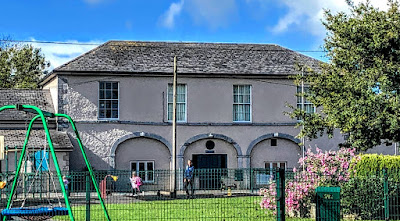 The 18th century Market House in Buttevant, Co Cork … there has been a market on this site since 1234 (Photograph: Patrick Comerford, 2020)

Buttevant is a colourful town in north Cork, particularly under blue skies in the autumn sunshine. Its castles, churches, and mediaeval friaries are its principal attractions. But it would be a pity to pay attention to those and not to notice its other attractive buildings, including its colourful pubs, and the commercial legacy found in its market house and the crumbling mill.

The Market House and Market Green are part of the original grid pattern layout of medieval Buttevant. This plan resembles the bastides in mediaeval south-west France.

Buttevant had been a thriving market town since mediaeval times, and the Market House was built in 1750 on the site of the original 13th century Market House.

A Market House has stood on a site at the south end of the town since 1234. In that year, David de Barry was granted a charter that allowed him to hold a weekly market in Buttevant, and an annual fair in October that lasted for several days.

Buttevant become a thriving and prosperous market town, and the Market House had scales used to weigh produce for sale and from which to determine taxes. Imported goods brought in by de Barry contacts from continental Europe were sold here, including wines, spices, dyes and English and European cloths.

The playground in front of the Market House was once the Market Green, where for many years local traders sold meats, hides, wool, grains, livestock, Irish cloth and timber.

For centuries, Buttevant had a weekly market and a yearly fair. The yearly fair evolved in time into Cahirmee Fair, held in the town to this day on 12 July each year.

This area was also used in mediaeval times for the punishment of crimes. Petty criminals were put in the stocks and more serious offenders faced the gallows in the square.

The present Market House, which was built ca 1750, is a handsome building with a fine arcadw. Until the 1970s the upper story was used as a courthouse.

A beautiful limestone fireplace inside was first erected by Garrett Barry in Lisgriffin Castle ca 1605-1610. It was rescued from Lisgriffin Castle in 1911 by Colonel James Grove White and installed in his home at Kilbyrne House in Doneraile. Kilbyrne House was demolished in the 1950s and Canon Murphy, parish priest of Buttevant, had it removed and re-erected in the Market House in Buttevant. 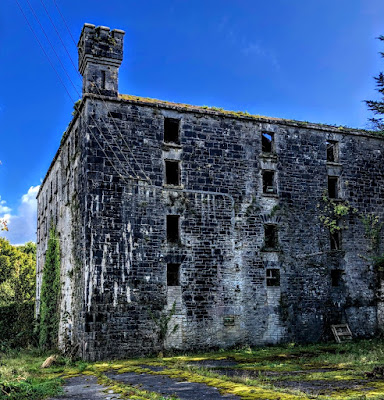 Buttevant Mill … there has been a mill existed on or near this site since mediaeval times (Photograph: Patrick Comerford, 2020)

Buttevant Mill stands on the banks of the River Awbeg, between the town and the original castle grounds. The laneway leading to the mill from the Main Street was called ‘MyInstrete’ or Mill Street, suggesting a mill has stood on or near this site since mediaeval times.

By the turn of the 18th and 19th century, the Barry fortunes had changed and Buttevant manor and castle had been sold by the Earls of Barrymore to the Anderson family.

John Anderson extended and remodelled the existing mill around 1810. He created a substantial, six-storey buildings high, with turrets that mirror those of Buttevant Castle, which he had also remodelled to reflect the fashions and tastes of the day.

Anderson installed the most advanced milling machinery available, and the mill was could produce over 20,000 barrels of flour annually.

However, Anderson went bankrupt following the Napoleonic wars and the mill passed to the Brownings of Limerick, who worked it until 1865. Over the next 20 years, it passed through several hands, including Charles Corbett of Buttevant and William Walsh of Mallow. It was also idle for a while when the building and machinery were damaged.

William Oliver of Kilfinane bought the mill in 1885, restored the building and installed the Robinson Roller system instead of the grinding stones. The mill then ran on steam and a turbine water system and flour production soared. However, the mill accidently burned in 1930.

Furney and McKay bought the mill and began to restore the building. Half the building was restored by 1935 and full restoration was completed by 1947. They used local grains and imported grain to manufacture animal feed.

Furney and McKay were importers of coal and fuel oil when they left Buttevant in 1975. The mill passed briefly to Greens of Cork and then to Dairygold, who used it to collect and classify grain from local farmers before sending it for milling. The mill closed in 2000. 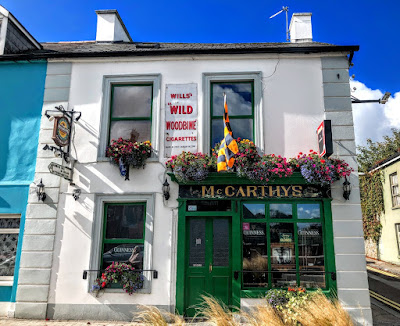 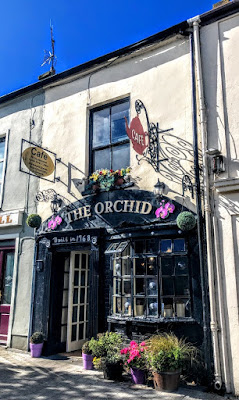 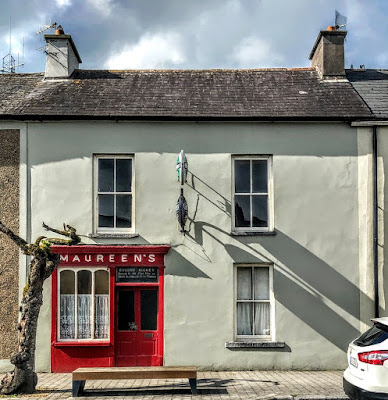 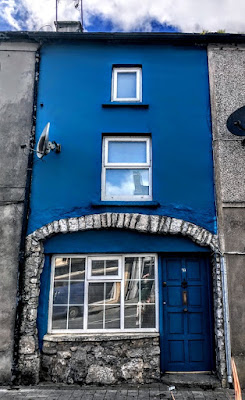 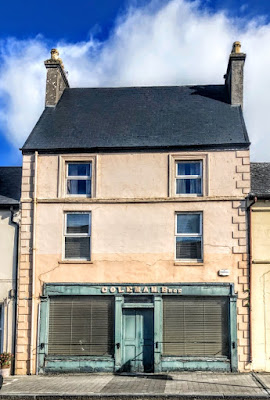 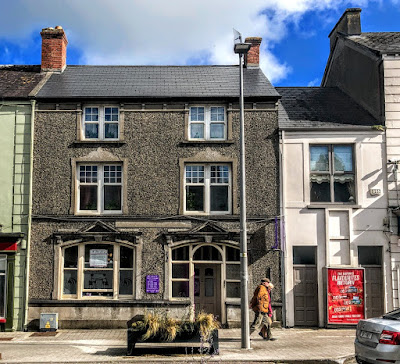 Some of the colourful pubs and buildings on the streets of Buttevant (Photograph: Patrick Comerford, 2020)