Poetic hints of summer at
Bettystown and Laytown 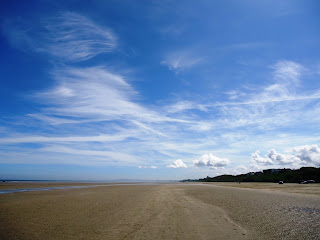 ‘White Tintoretto clouds’ above the long stretch of beach at Bettystown and Laytown, Co Meath this afternoon (Photograph: Patrick Comerford, 2013)

Summer has arrived at last ... well, at least on the east coast of Ireland. While summer is meaningless in the Czech Republic and other parts of Central Europe, temperatures reached 20 in many parts around Dublin.

Summer weather has been such a rare experience in this area for the past year that It was an opportunity not to be missed. Today is what we call a ‘Bank Holiday’ in Ireland – although it appears the banks in Ireland have had one lengthy holiday at the the expense of the people ... and for far too long.

Today was a day not to let the bankers have the only holiday at our expense. By early afternoon, two of us were on our way to the expansive beaches of Bettystown and Laytown on the ‘Gold Coast’ of Co Meath.

We turned off the old Dublin-Drogheda road at Piltown, and briefly visited Reilig Mhuire, where there is an interesting arrangement of the graves in concentric circles. In the cool shade of the trees, bells and windchimes and small bells were chiming gently, and at the end of the cemetery stands a modern high cross carved in imitation of ancient Irish styles.

A poetic reminder of Kazantzakis on a grave in Reilig Mhuire in Piltown, Co Meath (Photograph: Patrick Comerford, 2013)

This is the epitaph of the Greek writer Nikos Kazantzakis, inscribed on his grave in Crete on the wall of the bastion surrounding Iraklion, close to the Chania Gate. The original epitaph reads:

The same are words are on one of my favourite T-shirts from Crete. But this afternoon I also recalled the prayer by Kazantzakis in Report to Greco:

We continued on past the Village Hotel, which I see is up for sale, and down to the beach at Bettystown. The tide was out giving extra measure to this lengthy expanse of sand, a slight south-easterly breeze was blowing up a little dusting of sand, families were revelling in the warm sunshine and two donkeys were offering donkey rides.

The Mountains of Mourne could be picked out in blue relief to the north of the beach at Laytown and Bettystown this afternoon (Photograph: Patrick Comerford, 2013)

To the north, we could just pick out the Mourne Mountains, appearing as blue as the sky above which was bedecked here and there with what the poet Louis MacNeice described in his poem The Strand as ‘White Tintoretto clouds.’

In Relish, we were given a table by a bay window where we had a late lunch that lingered a little longer than we expected. Small clusters of people on the terrace outside were enjoying the sunshine, while below the sandbank we could see the family gatherings below on the beach. 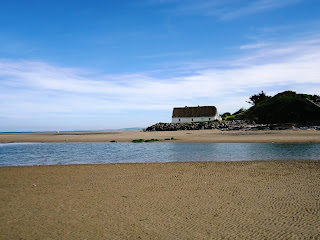 A white-washed, thatched cottage at the mouth of the River Inch in Laytown, Co Meath, this afternoon (Photograph: Patrick Comerford, 2013)

Some people were brave or foolish enough to roll up their trouser legs and try paddling in water that must still be cold – one or two were even brave enough to attempt going for a swim.

But why, oh why, does Meath Country Council persist in destroying this beautiful beach by allowing people to bring their cars on to beach, leaking oil, and with smart young men racing each other and doing fast turns? 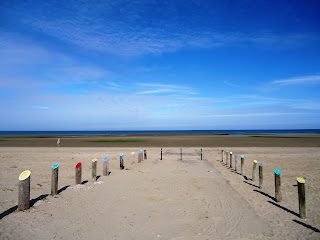 Stepping down onto the beach at Laytown, Co Meath, late this afternoon (Photograph: Patrick Comerford, 2013)

A little further south, we stopped again briefly at Laytown for another beach walk. It was almost 5.30, but it was still sunny and warm, and the Mourne Mountains could still be picked out in the distance.

On the way back we stopped again at Portrane, and gazed down at Tower Bay Beach and out to Lambay Island. As they say, isn’t there a grand stretch in the evenings?

No peanuts, no Jimmy Carter,
just Lansdowne on my mind 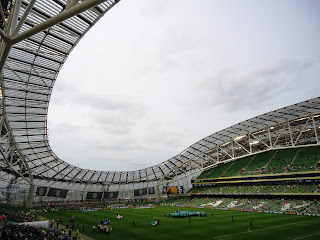 The new stadium is impressive, but Lansdowne Road was not packed for last night’s match between the Republic of Ireland and Georgia (Photograph: Patrick Comerford, 2013)

Georgia was on my mind yesterday. But there was no Jimmy Carter, no peanuts, no Savannah, Augusta or Atlanta, no Gone with the Wind, The Color Purple, Driving Miss Daisy or Midnight in the Garden of Good and Evil, and no Ray Charles singing Hoagy Carmichael’s Georgia on My Mind.

The nearest I got to that Georgia last night was a few empty Coca Cola bottles and peanut bags strewn beside the seating at what is now being called the Aviva Stadium in Dublin.

The name Georgia is an exonym. In the English language we call many countries and their people by names the inhabitants do not use themselves. Examples of English exonyms in Europe include Germany, Greece and Hungary, the names we give Deutschland, Hellas and Magyarország. And Georgia is another one: the people of Georgia call their country Sakartvelo.

Children hold the flags of Georgia and the Republic of Ireland … and ‘Davy Keogh Says Hello’ (Photograph: Patrick Comerford, 2013)

There was a low turnout in the stadium last night for the match, and while I could see a few white flags with red Saint George’s crosses, in the middle of the Mexican waves I could hear no-one encouragingly shouting: “Come on Georgia.” Or, for that matter: “Come on Sakartvelo.” Although I almost dhear a few voices trying to sing along with the Georgian anthem, Tavisupleba (Freedom).

Indeed, it is interesting that the flag of Georgia looks so like the flag of England; after all, Georgia traces its Christianity back not to Saint George but to Saint Andrew the Apostle. The Georgian Orthodox Church is one of the most ancient Churches, and claims apostolic foundation by Saint Andrew. In the first half of the 4th century, Christianity became the state religion of Iberia (present-day Kartli, or Eastern Georgia), following the mission work of Saint Nino of Cappadocia. There is even a small Georgian Orthodox Church in Dublin, using Saint Mary’s Church on Bloomfield Avenue, Donnybrook, and served by an Irish-born Priest of the Antiochian Orthodox Church, Father David Lonergan.

And if that was not enough to confuse and befuddle me, imagine how confused I was inside the stadium last night.

This was my first time back inside Lansdowne Road I was one of 48,000 fans at the last match in Lansdowne Road, when Leinster beat Ulster 20-12. The old stadium closed that day and was demolished.

I looked around last night, and was confused. Where was the Havelock Square end? Without the old Wanderers and Lansdowne pavilions, how could I know which end was which?

They wanted to rename Saint James’ Park in Newcastle, rebranding it as the Sports Direct Arena. It was a failed effort.

Call it Georgia or call it Sakartvelo … but please, don’t call this stadium Aviva. It will always be Lansdowne Road to me. 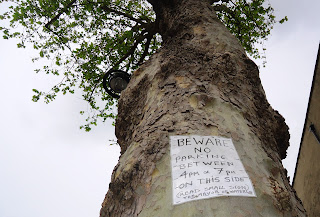 Posted by Patrick Comerford at 12:35 No comments: