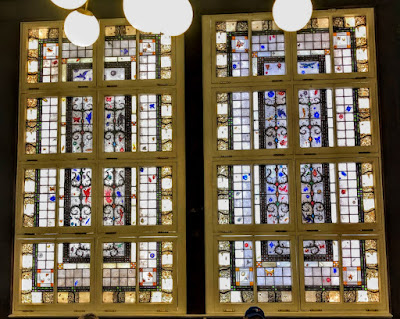 In many of my blog postings on churches I visit, I describe the stained-glass windows by a range of artists from the Hardman and Earley windows associated with Pugin and the Gothic revival in Ireland to 20th century windows by artists such as Phyllis Burke, AE Child, Michael Healy, Evie Hone, Catherine O’Brien, Patrick Pollen, Sarah Purser, Patrick Pye and Ethel Rhind.

Everyone who visits an Irish church seeks or is told of windows by Harry Clarke or by one of his students, including Richard King, Johnny Murphy, George Stephen Walsh, and his son George W Walsh.

But churches are not the only venues for viewing Ireland’s rich heritage of stained-glass art.

Bewley’s Oriental Café in Grafton Street is particularly known for its collection of Harry Clarke windows, but also has more modern windows by Jim Fitzpatrick and Pauline Bewick.

The Bewley family were Quakers who entered the tea trade when Samuel Bewley and his son Charles imported 2,099 chests of tea from Canton in China in 1835. The Bewley family later expanded into the coffee trade and in the late 19th century opened cafés in South Great George’s Street, Dublin (1894) and Westmoreland Street (1896). The company operated more than 20 cafes in Ireland by 1999 and six overseas.

Ernest Bewley opened the Grafton Street café in 1927 in a building that once housed Whyte’s Academy, a school whose pupils included the Duke of Wellington and Robert Emmet. The Grafton Street café has been described as a ‘Dublin landmark.’ The building shows influence from the Art Deco movement, with its façade decorated with an Egyptian Revival mosaic designed by the Dublin architectural practice of Millar & Symes.

The building on Grafton Street was modified extensively in 1995, and the shop closed between November 2004 and May 2005 for further refurbishment and restoration. In 2007, its lease was challenged by the landlord, Ickendel Ltd, after extensive works were carried out without landlord consent.

The Grafton Street café and shop closed again for more extensive refurbishment works from February 2015, and 140 jobs were lost. The shop reopened in November 2017 after a ‘1,000-day’ multimillion-euro refurbishment.

During the Covid-19 pandemic, management informed staff in May 2020 that the Grafton Street café would close permanently ‘in the coming weeks,’ leading to the loss of 110 jobs. However, in late July 2020, it was announced that it would re-open on a phased basis.

The Grafton Street café has six windows designed by Harry Clarke in 1927 and completed in 1928 at a cost of £60,000. The windows were commissioned by Ernest Bewley, the café’s founder, and were installed in 1929.

Harry Clarke was actively involved in part of the window’s execution, while some sections were executed under his supervision in his studio.

The Harry Clarke Room is found by walking straight through the front café to the back of the building on the ground floor. There, the main wall of the café displays four decorative windows. The windows are lightly coated clear glass and are decorated with small butterflies, flowers, exotic birds and colourful sea creatures. 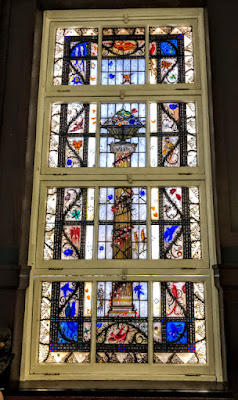 The six windows in the Grafton Street café were designed by Harry Clarke in 1927 and completed in 1928 (Photograph: Patrick Comerford, 2022)

These stained-glass panels were among valuable artworks to be donated to the public as Paddy Campbell retired. It was reported at the end of 2020 that the ownership of the decorative glass panels by artists including Harry Clarke, Pauline Bewick and Jim Fitzpatrick, had been transferred to the café’s parent company. At the time, it was said the artworks would later be donated to a ‘suitable institution.’

However, the Ronan Group Real Estate (RGRE) Grafton Ltd claimed that Bewley’s wanted taxpayers to foot its rent requirements for the café on Grafton Street by donating the Harry Clarke windows the Irish people, and the company took legal action against Bewley’s in the dispute about the ownership of the windows.

RGRE said Bewley’s ‘can’t try to sell [RGRE] what [RGRE] already [owns],’ and said the six stained glass windows on the café’s ground floor are worth over €1 million. They are insured by Bewley’s for a replacement cost of €2 million.

Bewley’s, for their part, claimed that the windows are not part of the property that houses the Grafton Street café, which was sold by Bewley’s in 1987 and was later bought by RGRE. Bewley’s said the windows had been treated as ornamental decorative panels and had always remained in the ownership of Bewley’s.

‘Bewley’s belongs to the people of Ireland. The Harry Clarke panels, in particular, are a national treasure that we would love to see move into public ownership through a donation to a suitable institution,’ Paddy Campbell said at the time.

‘We realise the need to preserve Bewley’s unique heritage, which has become an integral part of our culture over the last century,’ he said. ‘Our wish is that the artworks would remain in the Grafton Street premises and be freely accessible to the general public to enable viewing.’ Meanwhile, the glass panels remain in the cafe in Grafton Street.

The window in the café by Jim Fitzpatrick depicts the story of Cruitne, daughter of Lochan. Finn, hero of the Fianna, left the service of the King of Kerry and went into military service under Cullen of the Uí Cuanach, and stayed in the house of the chief smith Lochan. Lochan had a beautiful young daughter, Cruitne, who fell in love with Finn was still in his youth and under a bond, not to reveal his name. Cruitne shared her bed but Finn but they never married.

The window has been brought to Bewley’s café in Grafton Street, where it now stands alongside the Harry Clarke windows. 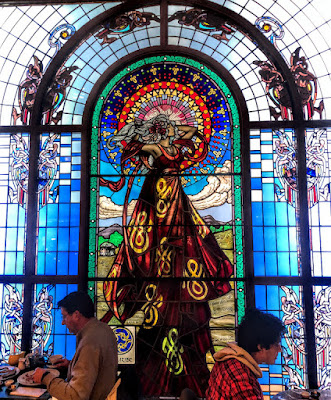 The window by Jim Fitzpatrick in Bewley’s Café in Grafton Street, Dublin, depicts the story of Cruitne (Photograph: Patrick Comerford, 2022)

Praying with the saints in Ordinary Time: 24 February 2022 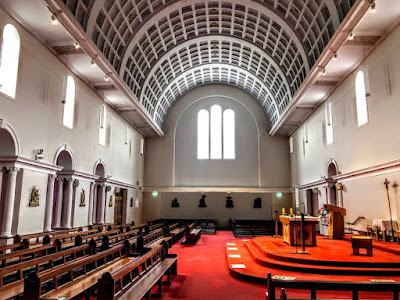 Inside the chapel at Terenure College, Dublin … a Carmelite-run school in Dublin (Photograph: Patrick Comerford)

The Church Calendar is now in Ordinary Time until Ash Wednesday next week (2 March 2022). During this month in Ordinary Time, I hope to continue this Prayer Diary on my blog each morning, reflecting in these ways:

‘In light of heaven, the worst suffering on earth will be seen to be no more serious than one night in an inconvenient hotel.’

The Prayer in the USPG Prayer Diary today (24 February 2022) invites us to pray:

Let us pray for Christian campaign groups such as Christian Concern for One World, which advocates fair trade, supporting refugees and caring for creation.