I have not sent any Christmas cards … yet.

There is a well-respected tradition in Ireland – or so I am told (and this shall be my excuse) – that families do not send Christmas cards in the Christmas season after the death of a close family member.

I decided at the last moment to take out my list, and start writing cards and envelopes. They had piled up on the floor around me when the plumber arrived this morning, not one but three plumbers, on three separate occasions, like three wise men one after another.

I’m glad they came and created havoc … the havoc would have been even greater by Christmas Day, because after the first visit the drip had turned to a drizzle, and by this afternoon it could have been a downpour.

Whatever about three plumbers coming at Christmas-time, I know Santa is coming. I saw him everywhere in Woodie’s in Lucan this afternoon. 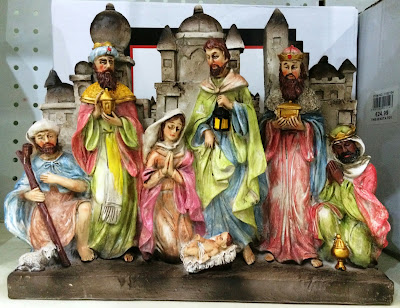 Fixed figures in a crib in Woodie’s in Lucan (Photograph: Patrick Comerford, 2014)

I left the pile of unfinished Christmas cards and went shopping for a few hours this afternoon. There were Santas all over the shop, some as large as life, some with 40% off, some with even 70% off.

And there were cribs everywhere too. One was a fixed crib. Or at least the figures were fixed. If I bought it this afternoon, Mary and Joseph would have arrived in the house today too … along with the Christ Child, a shepherd, and the three Wise Men.

If the three Magi had arrived home with me in one of those fixed cribs they would have had no time to go shopping for their gold, frankincense and myrrh … and there are still 18 more days to Epiphany.

Perhaps they were called in to fix the plumbing.

Instead of buying a Santa or a crib, I bought six espresso cups and saucers ... double espressos for three wise men, should they call, and, well, I get through a lot of coffee anyway. 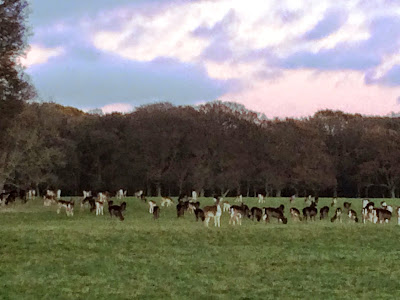 Rudolph and his friends waiting for Santa in the Phoenix Park (Photograph: Patrick Comerford, 2014)

Later in the afternoon, it was obvious that Santa is coming, and that his preparations are in the final stages. From Woodie’s, two of us made our way through Palmerstown and Chapelizod to the Phoenix Park, where there were a lot more deer in the park than Dasher, Dancer, Prancer, Vixen, Comet, Cupid, Donner, Blitzen, Rudolph and Olive (you remember Olive the other reindeer, don’t you?).

There were hundreds of them in the Phoenix Park this afternoon, some dashing, some dancing, some prancing too, but none at all afraid of the people who came close to them. That’s probably because at this time of the year they are used to Santa and the elves coming along and picking and choosing which among them is going to pull the sleigh this year.

The Wise Men have arrived at the crib in Farmleigh … long before the Child in the Manger (Photograph: Patrick Comerford, 2014)

By the time we got to Farmleigh, the park was almost covered in darkness.

The crib by the house in Farmleigh already has Mary, Joseph, the shepherds, the animals – and the three Wise Men, but no Christ Child. Well that’s what the Magi get for arriving too early … not a wise call at all.

They shall just have to wait a while now … unless there was another plumbing job they need to see to.

Meanwhile, there was time for two double espressos and two scones at the Boathouse, looking out at the decking and the boating lake that was once the privileged preserve of the Guinness family.

Outside, as we left, we could catch a glimpse of the city lights below the Phoenix Park, looking seasonal and warm and welcoming.

I ought to get down to writing the rest of those Christmas cards … before the child or the Magi arrive.

Hopefully there is no need for plumbers between now and Epiphany. 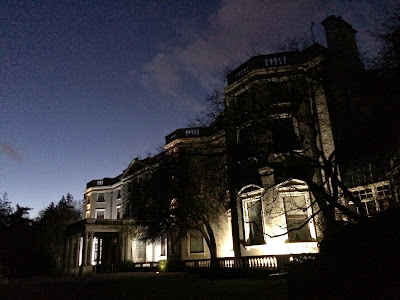 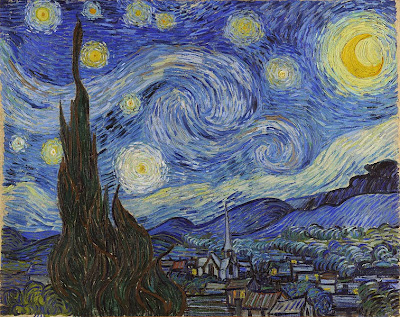 As part of my spiritual reflections for Advent this year, I am looking at an appropriate hymn for Advent each morning. This morning [19 December 2014], I have chosen ‘Creator of the starry height’, which is Hymn 121 in the Irish Church Hymnal.

This is a translation by the Revd John Mason Neale (1818-1866) of a Latin hymn for Advent, Conditor alme siderum, that may date back to the ninth century, or perhaps earlier to the seventh or even the sixth century.

Neale translated six of the seven verses for the Hymnal Noted Part I (1852). His original version begins: “Creator of the stars of night.” The “starry heigh” was an alteration to his text by WH Monk and Charles Steggall when they were editing Hymns Ancient and Modern (London, 1889), where it appears as Hymn 45.

Neale was born in Conduit Street, London, on 24 January 1818, the son of the Revd Cornelius Neale, a Fellow of Saint John’s College, Cambridge, and both his parents were said to have been “very pronounced Evangelicals.” He was named after the Puritan cleric and hymn writer John Mason (1645-1694), an ancestor of his mother, Susanna Mason Good.

His father died in 1823, and he was sent to school at Sherborne School, Dorset, before going on to Trinity College Cambridge in 1836.

After graduating in 1840, he was elected Fellow and Tutor of Downing College and appointed chaplain. As a graduate, he won the Seatonian Prize eleven times. In Cambridge, he was also one of the founders of the Cambridge Camden Society, later known as the Ecclesiological Society.

In 1842, he married Sarah Norman Webster, the daughter of an evangelical clergyman. In 1843, he was appointed Vicar of Crawley in Sussex, but was prevent by ill-health from being instituted. After some time recuperating in Madeira, he was appointed by Lord De La Warr as Warden of Sackville College, an almshouse for elderly men in East Grinstead, Sussex. There he spent the rest of life, and founded the Sisterhood of Saint Margaret, a religious community of women who moved to East Grinstead in 1856.

His theological opinions were opposed violently and with such prejudice that he was attack and beaten physically on occasion. He was inhibited by the Bishop of Chichester, Ashurst Turner Gilbert, from exercising his priestly duties in the village for 14 years, and this was not formally removed until 1863. But Neale faced prejudice with courage and charity. His close friends included the Revd Dr Richard Frederick Littledale (1833-1890), the Dublin-born priest and writer who had a noted influence on Christina Rossetti and who was an influential figure in the later phase of the Oxford Movement.

Despite opposition from his own bishop and in his own diocese, Neale was honoured in 1860 with a doctorate in divinity (DD) from Trinity College, Hartford, the second oldest college in Connecticut after Yale University.

His last public act was to lay the foundation of a new convent for the Sisters on Saint Margaret’s Day, 20 July 1865. He died on the Feast of the Transfiguration, 6 August 1866.

His earliest writings were contributions to The Ecclesiologist while he was in Cambridge. In Madeira, he began writing his Commentary on the Psalms, later completed with his friend Dr Littledale and published in four volumes in 1874.

At Sackville College, Neale wrote a five-volume History of the Holy Eastern Church (1847-1873). His other works include biographies of Scottish Episcopal bishops, work on the Scottish Liturgy, a history of the Jansenists in Holland, translations from Greek and Latin, and an account of the legend of the Seven Sleepers of Ephesus.

The tune always associated with this hymn, Conditor Alme, is a Sarum melody and it has been harmonised for the Irish Church Hymnal by Martin John White, a former organist at Saint Patrick’s Cathedral, Armagh (1968-2002).

Creator of the starry height by John Mason Neale

Creator of the starry height,
thy people’s everlasting light,
Jesu, redeemer of us all,
hear thou thy servants when they call.

Thou, grieving at the helpless cry
of all creation doomed to die,
didst come to save our fallen race
by healing gifts of heavenly grace.

When earth was near its evening hour,
thou didst, in love’s redeeming pow’r,
like bridegroom from his chamber, come
forth from a virgin-mother’s womb.

At thy great name, exalted now,
all knees in lowly homage bow;
all things in heav’n and earth adore,
and own thee King for evermore.

To thee, O Holy One, we pray,
our judge in that tremendous day,
ward off, while yet we dwell below,
the weapons of our crafty foe.

To God the Father, God the Son,
and God the Spirit, Three in One,
praise, honour, might and glory be
From age to age eternally.

Thou cam’st, the bridegroom of the bride,
as drew the world to eventide;
proceeding from a virgin shrine,
the spotless Virgin all divine.