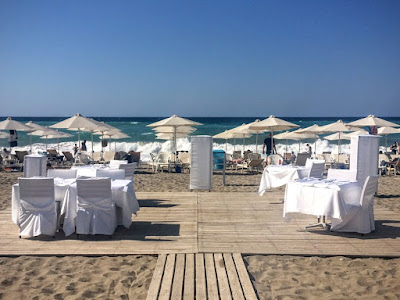 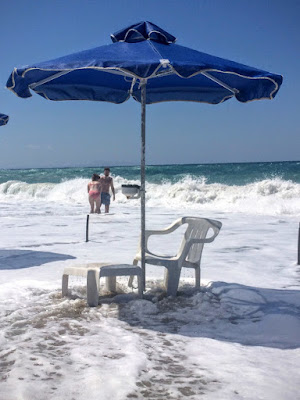 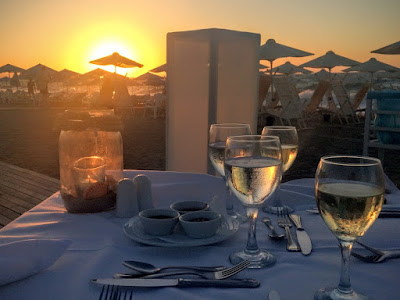 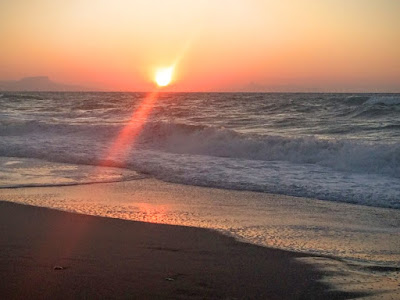 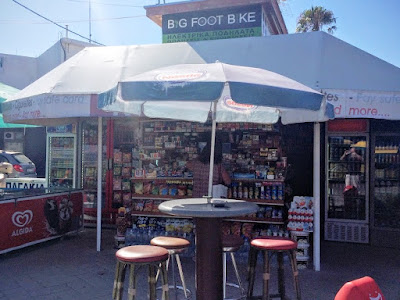 My neighbouring kiosk in Platanes is a source for bus tickets into Rethymnon (Photograph: Patrick Comerford, 2016)

The iconic kiosk that was once seen on every street corner in every Greek town is soon to become a thing of the past as owners retire or die and their licences are not renewed.

Recent legislation passed late last year in the Greek parliament means that the unique períptero (περίπτερος), the traditional “mini market,” is not so much going to die, but in the words of the old adage about old soldiers, is simply going to fade away.

According to the new law, when a kiosk closes down or the owner dies, the licence cannot be renewed or transferred.

One count a few years ago estimated there are 46,000 períptera throughout Greece, with 5,500 were Athens and 1,500 in Thessaloníki. But the numbers are dropping, and the most recent count I found said there are now about 12,000 kiosks in Greece, and their numbers continue to dwindle rapidly since the onset of the latest economic crises. 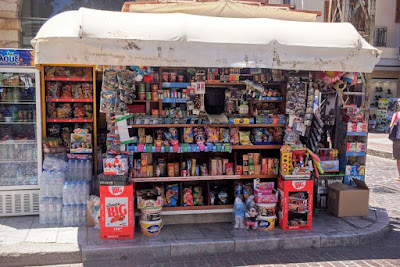 A kiosk on a street corner in the old town in Rethymnon (Photograph: Patrick Comerford, 2016)

In Rethymno at one time, it seemed there was virtually one on every street corner. They usually open all day long, from morning until late at night, seven days a week. Some kiosks are like 24-hour mini markets, selling so many things from chocolate and chewing gum to cigarettes and condoms.

I have bought bus tickets at the corner kiosk beside me in Platanes as I waited to catch a bus into Rethymnon these past three weeks. But it also sells local newspapers, packed ice, yoghurt, nuts, ice cream, beer and what seems like everything but the kitchen sink.

In the days before mobile phones, the kiosk was the place to make a phone call or buy phone cards – do you remember them? The kiosk sells pens, lighters, postcards, stamps and disposable razors, as well as kombolói (κομπολόι), the worry beads that serve every Greek male as an antidote to smoking.

At archaeological sites such as the Acropolis in Athens or Knossos in Crete they sell guidebooks, maps, tourist trinkets and cheap figurines.

For over a century, the períptero has been a part of everyday life in Greece and an essential element of the streetscape of every Greek city and town. The first kiosk opened on Panepistimiou Street in Athens in 1911. The idea of the períptero quickly spread throughout Greece and it soon became a national institution. 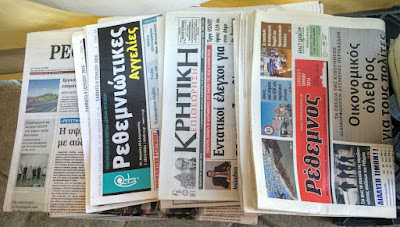 Local newspapers on sale in my local kiosk in Platanes (Photograph: Patrick Comerford, 2016)

Most kiosks string the daily newspapers up like washing on a line – many even use clothes pegs to secure the afternoon editions to make front-page easy reading for passers-by.

The poet Kiki Dimoula portrays everyday life in Athens in her poems. In ‘Mourning in Kypseli Square,’ she talks of

... the kiosk.
Standing on its feet all day
with its small-stock melancholy,
dressed
in its afternoon papers.

I remember during the political scandals that surrounded Andreas Papandreou in 1988 and 1989 how people gathered in large numbers around kiosks in Rethymnon as they started hanging up the newspapers, eager to catch up on the latest news and to debate the headlines about the Bank of Crete and Dimitra ‘Mimi’ Liani.

Once the kiosk operator was known by everyone on a street. He could tell you all the gossip and was well informed about the latest political news or the sports results.

But in recent years, the recession has hit the kiosks hard. Rising prices have driven people away. In the past, people bought cigarettes, sweets or soft drinks from the kiosk; now they go to the supermarket where they buy them at lower price.

The present economic crisis seems to have marked the beginning of the end for the kiosk. One recent report says that of the 1,080 remaining kiosks in Athens, almost half have closed down and another 300 have been abandoned. The city has removed most of them from the streets and very few closed ones have been left standing. What would life be like on Tsouderon Street without its local períptero? (Photograph: Patrick Comerford, 2016)

Some of my other favourite períptera have included one in Syntagma Square, outside the Finance Ministry in Athens, where I found a toothbrush and socks late at night after my luggage failed to arrive with me, and another in Venizelou Square on Iraklion which has the most bedazzling range and variety of newspapers.

At one time, kiosks were big business throughout Greece, contributing up to 5% of the annual GDP of Greece. In those days, the average daily turnover of a single kiosk could total €1,500 – with its takings boosted at this time of the year by the tourism sector. 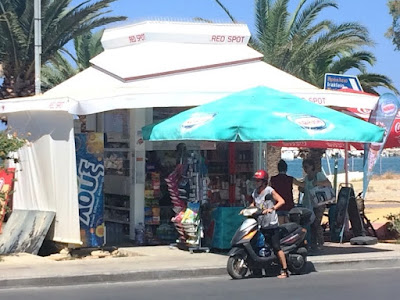 A kiosk by the seafront in Rethymnon, boosted by the tourist season (Photograph: Patrick Comerford, 2016)

But you could never buy a períptero. A law dating back to 1949 allowed only wounded soldiers drawing a pension from the Defence Ministry to own a kiosk.

Although Greece sent troops to the Balkans in recent decades, traditional tensions with Turkey eased long ago, and Greek troops have not fought in a war in the memories of most Greeks. So, the proprietors are often soldiers’ widows, or policemen and soldiers who have been injured in peacetime activities. Most are not involved in the daily management of their kiosks, and many kiosks have been have been passed down the family line.

The law allowed owners to rent their períptera for three-year periods, so that fewer than 5 per cent of kiosks were owner-managed, while more than 95 per cent were rented. Licence owners often demand high initial down payments and high weekly rents.

In the past, because this is a cash-based business, kiosk operators faced the constant danger of armed thieves demanding cash or phone cards. In recent years the new threats to the survival of the kiosks were the disastrous downturn in the Greek economy, new anti-smoking laws and increased taxation on tobacco.

Now, it seems, like the old soldiers they were first supposed to rescue them from poverty, that the kiosks are not going to die but are going to fade away.

A traditional kiosk in the old town in Rethymnon (Photograph: Patrick Comerford, 2016)