Reinventing the wheel ... or square tyres for square wheels?

So often we joke about reinventing the wheel. But I was taken aback by this business sign opposite the Stadium in Tallaght late this evening.

Two of us had spent the afternoon in Portrane with my Lynders cousins, handing over gifts collected for the charities in Romania and Albania supported by Hand to Heart, and for the great sale at The Quay on the August Bank Holiday weekend. 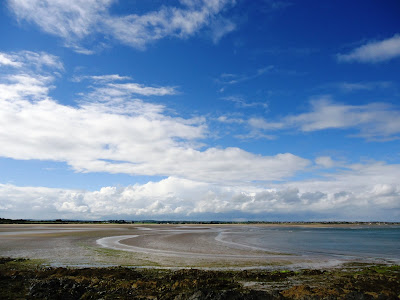 The broad stretch of sand on the Burrow Beach in Portrane, Co Dublin, this afternoon (Photograph: Patrick Comerford, 2013)

Although yesterday was Midsummer’s Day, there was no sign of summer on the wide stretch of sand below us. The tide was out, and a few families were playing on the beach, but the rain was coming down in bursts and small showers.

After a few hours at the Quay, we stopped again at Donabate, but the rain was still pouring down, the waves were choppy, and the rain showers could be seen far out in the Irish Sea.

Mist and rain on the beach at Donabate this evening (Photograph: Patrick Comerford, 2013)

We drove on down past the Island Golf Club and along the southern rim of the peninsula. The tide was out and the estuary between Donabate and Malahide looked more like mud flats and marshland. In the choppy waters, our people were making brave attempt at sail-boarding. 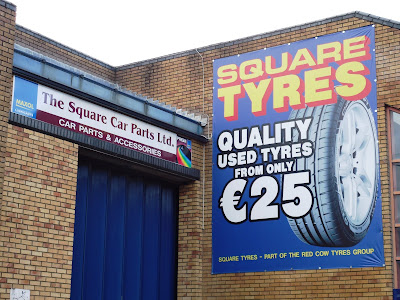 On the way home, I had to stop when we saw this sign in Tallaght. I wondered: Do you need to have Square Wheels to have Square Tyres fitted? And apart from Square Parts, do they fit round parts, triangular parts, pyramidical parts?

It reminded me too of the old adage that when the new shopping centre was built in Tallaght a few decades ago it was called the Square because no-one on the site could spell Pyramid.

Yes, I was up early this morning. The international and sporting event of the day must have been the first test match in the Lions’ tour of Australia, with dramatic tries and a even more dramatic climax.

Meanwhile, there is no need to feel like a square peg in a round hole. Plan ahead for that sale in Portrane on the August weekend. It makes a difference to many people in Romania and Albania.

Posted by Patrick Comerford at 22:47 No comments: 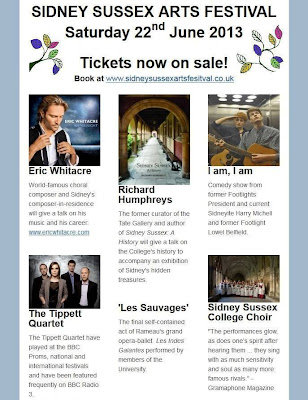 I hope to back in Cambridge later next week and to drop into Sidney Sussex College – but I’m going to be too late for this year’s Sidney Sussex Arts Festival.

The programme for this – the third bi-annual Arts Festival – includes an interesting mix of music, comedy, theatre, cinema sculpture and more.

The festival takes place today [Saturday, 22 June 2013] and includes a performance of Shakespeare’s A Midsummer Night’s Dream – which I saw on the lawns of Saint John’s College when I was staying in Sidney Sussex the year before last – a performance of Les Sauvages, the final self-contained act of Rameau’s baroque opera. Les Indes Galantes, and a talk by Sidney’s composer-in-residence Eric Whitacre.

The Festival comes at the end of what is known in Cambridge as May Week, and for one day at the end of May Week, Sidney Sussex Arts Festival is taking over the college and its beautiful gardens, offering a series of acts, concerts, talks and exhibitions. This year’s festival includes music, poetry, visual art, film, dance and theatre.

Most acts are organised, directed and created by students, but they also included a number of delights from the local community. The festival is family-friendly, with a children’s area with face-painting, games and perhaps even a donkey!

Families and children of all ages are welcome in Sidney’s magical midsummer gardens today.

The Tippett Quartet has performed at the BBC Proms, national and international festivals and has been featured frequently on BBC Radio 3, and has received praise from the Guardian, the Sunday Times, the Daily Telegraph and Gramophone Magazine.

Eric Whitacre is one of the most popular and performed composers of our time. His first album won a Grammy last year, reaped unanimous five star reviews and became the No 1 classical album in the British and US charts within a week of release.

The college gardens are the venue for an exhibition of contemporary sculpture by local artists.

The college kitchens are displaying their prize-winning culinary artistry, with chocolate-making demonstrations and an opportunity to buy their creations.

There are screenings of short films from Cambridge Cinema Shorts, who hold the Strawberry Shorts Film Festival every year on Midsummer Common.

Cromwell's Head, a popular band set up by Sidney students, promises a unique take on well-known pop to vintage soul.

And there is much, much more on offer.

The programme runs from 2 p.m. this afternoon until 9.30 this evening … or later.

Everything should be back to normal when I drop in on Wednesday afternoon. But I can look forward to a full week in Sidney Sussex later next month when I am back for the annual summer school of the Orthodox Christian Studies from 14 to 19 July.

The wisteria in Sidney Sussex College, Cambridge, in bloom in mid-May, stretching the length of Hall and Chapel Courts. This photograph, taken on19 May by the Fellow Communications Officer, Dr David Beckingham, is looking from Chapel Court to Hall Court