The current [February] edition of the Church Review (Diocese of Dublin and Glendalough) publishes the following photograph and half-page news report on page 21: 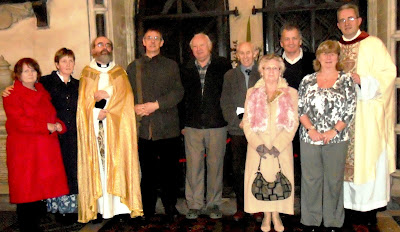 THE work of an outreach group from Christ Church Cathedral, Dublin, and its engagement with the Mendicity Institution and inner-city poverty was praised recently special events in the cathedral.

The outreach group, which is co-ordinated a member of the cathedral congregation, Barbara Comerford, works regularly on Sundays with the Mendicity Institution, one of Dublin’s oldest charities.

The Dean of Christ Church Cathedral, the Very Revd Dermot Dunne, who entertained the outreach group to lunch, praised their work as part of the mission and ministry of the cathedral. He pointed out that one of the founders of the institution, Thomas Abbott, is commemorated in a monument at the West Door of the Cathedral.

The dean is an ex-officio patron of the charity, along with the Church of Ireland and Roman Catholic Archbishops of Dublin, and the Dean of Saint Patrick’s Cathedral.

Preaching at the Cathedral Eucharist earlier in the day, Canon Patrick Comerford said: “Today, the ‘Mendo’ works from Island Street, providing meals for about 70 people each day. Over the years, the people it helps have changed, but the basic object remains the same: to make it unnecessary for men, women and children to beg in the streets of this city, no matter what their religion may be, no matter what their nationality is.”

He said the members of this small group “are working not for themselves, but on behalf of this whole cathedral community, to serve Christ in all they find on those Sunday afternoons.”
Posted by Patrick Comerford at 13:30 No comments:

Getting from Cambridge to Kilkenny

The snow covered fields and trees and East Anglia at sunrise this morning (Photograph: Patrick Comerford, 2012)

It took some time to get from Cambridge to Kilkenny on Monday morning – a taxi from Sidney Sussex College through the melting sludge to Cambridge railway station; a train from Cambridge through snow covered fields in East Anglia to Stansted Airport; a delayed flight from Stansted to Dublin; a lift from Dublin Airport to Kingsbridge (aka Heuston) Station; a train from Dublin to Kilkenny; and a walk from Kilkenny station to the Kilkenny River Court Hotel.

It was a late night in Sidney Sussex last night [Sunday]. After [reaching in the college chapel at Choral Evensong there was formal dinner in the hall, followed by the usual post-dinner, but late night conversations with dons and guests in the Combination Room in Cloister Court.

I was woken shortly after 4 this [Monday] morning by a blackbird singing in the dark. A few hours later – thankfully – I was in taxi, arranged by my host, the Revd Dr Peter Waddell, and the college porters in the early morning. It was a drive around the city, into Jesus Lane and past Parker’s Piece, through the melting and freezing snow, to the station. 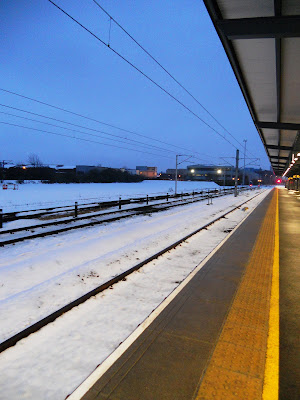 Some early morning trains, including the train to Ely, were cancelled. But my train journey through the flat open countryside was blissful – even though I do not normally appreciate snow.

The fields, the villages and the woods of East Anglia were covered in a blanket of snow this morning. Here there was a hare, hopping though once green fields. There, a brace of pheasants picking through to the feed below the snow. And then a dramatic sunrise, as a red globe intruded, peeking through the indistinct horizon between a white landscape and a white, cloud-filled sky.

The flight was delayed because of the delays experienced by the incoming flight. But no-one explained why that in turn had been delayed.

Thankfully, I got to Kilkenny in time to hear the first paper at the Dublin and Glendalough Clergy Conference, by a distinguished speaker who had also made his way from Cambridge to Kilkenny. Professor David Ford, who was born in Dublin, is the speaker at the conference, along with the poet Micheal O Siadhail.David Ford, who is talking to us about ‘The Future of Christian Theology’ – the title of his most recent book – has been the Regius Professor of Divinity at Cambridge since 1991.

David Ford went to school in the High School in Dublin. As an undergraduate, he studied classics at Trinity College Dublin. From there, he went on to Saint John’s College, Cambridge, where he completed a degree in theology. He later studied at Yale and Tubingen, and completed his doctoral theses in Karl Barth at Cambridge.

After lecturing at the University of Birmingham, he moved to Cambridge in 1991 as successor to Bishop Stephen Sykes as the Regius Professor of Divinity – the first person to hold this chair who was not in ordained Anglican ministry.

He helped found and chairs the Centre for Advanced Religious and Theological Studies at Cambridge, and he is a member of Saint John’s College and a fellow of Selwyn College. As Regius Professor, he is also attached to Trinity College, Cambridge. His books include The Modern Theologians: An Introduction to Christian Theology in the Twentieth Century, now in its third edition; Theology: A Very Short Introduction (1999); and The Future of Christian Theology, published last year,

His other research interests include the shaping of universities and of the field of theology and religious studies within them; political theology; theology and poetry; ecumenical theology; and Christian theologians and theologies.

Later this afternoon, we moved to Saint John’s Church in John Street, Kilkenny, for Evening Prayer. Over dinner, it was good to hear more about David Ford’s work and to renew friendships with friends and colleagues. This promises to be an interesting conference.

Meanwhile, I have a room looking out across the River Nore to Kilkenny Castle. Midnight has passed, and this city and its castle are sparkling and glowing in the dark – quite a contrast to Cambridge in the snow. 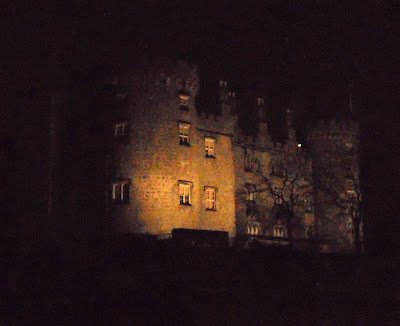