Sails and sunshine on an autumn afternoon 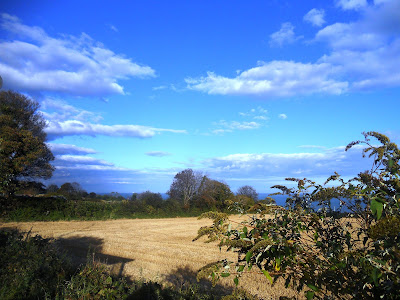 Fields of green and gold and skies of blue in the late autumn sunshine above Greystones this afternoon (Photograph: Patrick Comerford, 2012)

Over the past two weeks, I have worked 12 consecutive days, one after another, including six late evenings, some of them beyond 10 at night. I was tired to the point of exhaustion by Friday evening, and missed the opportunity this afternoon to get to Wexford for the opening of an art exhibition in Saint Iberius’ Church.

But I still plan to return to Co Wexford next week when I am speaking in Saint Mogue’s Cottage, beside Saint Edan’s Cathedral, Ferns, at the Diocese of Ferns Ecumenical Committee on the present state of the Church of Ireland.

Eventually, I got out this afternoon for a late lunch in Greystones, Co Wicklow. And what a beautiful autumn afternoon it was, with warm sunshine, blue skies and calm waters.

Autumn colours by the roadside outside Greystones this afternoon (Photograph: Patrick Comerford, 2012)

We stopped first at the brow of a hill south of Bray Golf Club to admire the view across green and golden fields out past Greystones Harbour and out to the calm Irish Sea where a handful of sails were enjoying weather more appropriate for late summer than late autumn. The fuchsia and lavender were still in bloom in grass verges by the roadside. 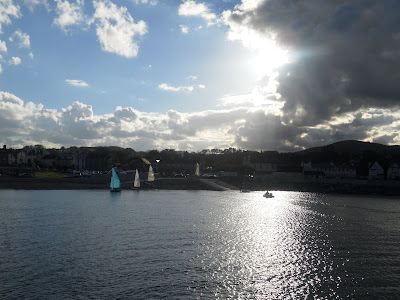 Sunshine and sails in the new harbour in Greystones this afternoon (Photograph: Patrick Comerford, 2012)

We stopped again at the new harbour, where the slowly setting sun was sparkling on the waters as those small sailing boats were being guided back into the harbour.
The harbour is still waiting completion, with the space allocated for clubs and a lifeboat station still fenced off and forming ugly eyesores below the harbour walls, so that our walk came to an unexpected dead-end.

The blackberries were still ripening below the railway line in Greystones (Photograph: Patrick Comerford, 2012)

Down on the beach, the sharp sunshine was creating warm blue colours in the sky, and at one end one family – parents and children – were brave enough to try swimming in the sea water. By the railway line, the blackberries were still ripening although it is almost a month since Michaelmas.

We made our way back under the rail line and up through the town for a very late lunch in the Happy Pear. It was still warm enough to sit outside, and the evening remained bright enough to enjoy life passing by.

Above Supervalu across the street, in the clear blue sky, a slim crescent moon was rising. I had another double espresso. I had been fed well and felt rested and refreshed.

The blackboard menu in the Happy Pear in Greystones (Photograph: Patrick Comerford, 2012)

Posted by Patrick Comerford at 20:10 No comments:

A meeting in Ferns next week

In Ferns, Canon Patrick Comerford, Lecturer in Anglicanism, Liturgy & Church History in CITI, will speak at a meeting of the Ferns Ecumenical Group in Saint Mogue’s Cottage on the present state of the Church of Ireland.

Posted by Patrick Comerford at 11:06 No comments: