With the Saints in Lent (23): Saint Perpetua and Saint Felicity, 7 March 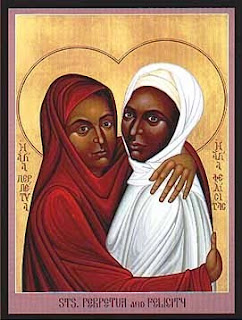 Saint Perpetua and Saint Felicity are martyrs of the 3rd century who are believed to have died together in Carthage on 7 March 203.

Saint Perpetua and Saint Felicity have been remembered on 7 March in the Calendar of the Western Church since the fourth century. For some time they were replaced in the Roman Calendar by Saint Thomas Aquinas, but in 1908 Pope Pius X moved their remembrance to 6 March. In 1969, the feast of Saint Thomas Aquinas was moved, and Saint Perpetua and Saint Felicity were restored to 7 March once again.

The Church of England, the Episcopal Church (TEC) and the Lutheran Church also commemorate the two martyrs on 7 March. In the Eastern Orthodox Church, their feast day is 1 February.

Saint Perpetua, who was born around 181, was a 22-year old married noblewoman and a nursing mother. She was 22 when she was martyred. Her co-martyr, Saint Felicity, was a pregnant mother and her slave.

In the account of their martyrdom in The Passion of Saint Perpetua, Saint Felicitas, and their Companions, they are recalled as members a group of catechumens who were arrested for their faith and executed at the military games in celebration of the Emperor Geta’s birthday.

Saint Perpetua’s account recalls her conflicts with her father, who urged her to recant her faith. But she refused and was baptised before being moved to prison. There she nursed her child before entrusted her to the care of her mother and brother.

In the first of four visions, Saint Perpetua climbs a dangerous ladder to which various weapons are attached and realises that the martyrs are to suffer. Her father visits her in prison and pleads with her, but Saint Perpetua remains true to her faith. In a second vision, she sees her brother Dinocrates, who had died unbaptised at the age of seven. She prays for him and has a vision of him happy and healthy. Again her father visits her in prison.

The day before her martyrdom, Sait Perpetua has another vision in which she defeats a savage Egyptian, and interprets this dream to mean that she must do battle with the Devil too.

In prison, the slave Felicity gives birth to a daughter. She had initial concern that she would not share a martyr’s death with her companions, as the law forbade the execution of pregnant women.

On the day of the games, the martyrs were led into the amphitheatre, and at the call of the crowd they were first scourged by a line of gladiators before a boar, a bear and a leopard were set on the men and a wild cow on the women. Wounded by the wild animals, they gave each other the kiss of peace and were then put to the sword.

The date of their martyrdom is traditionally given as the year 203, during the persecution of Christians throughout the Empire under Septimus Severus (202-203), whose decrees outlawed conversion to Judaism and Christianity. However, their martyrdom is also associated with a birthday festival of the Emperor Geta, placing it between 209, when Geta was made Augustus, and 211, when he was assassinated.

Saint Perpetua and Saint Felicity deferred their roles as mothers to remain loyal to Christ, leaving behind young children at the time of their death. In becoming martyrs, they failed to conform to the expectations of their families and of society.

Although Saint Perpetua is said to have been “honourably married,” no husband appears in the account of her martyrdom.

Was he a non-Christian who distanced himself from his wife’s religious stand? Was he away at the time? Was edited out of the text? Is his omission to emphasise that Perpetua sees herself called to be the bride of Christ? Were Perpetua and Felicity Montanists who left their non-Christian husbands and lived celibate lives to devote themselves to preaching the Gospel?

Saint Perpetua, whose full name was Vibius Perpetua, was a member an aristocratic family with Roman citizenship. Her execution alongside slaves shows Christianity’s ability to transcend social distinctions. Perpetua and Felicity are equal as martyrs, making a dramatic statement of the way in which Christianity transcends social barriers.

Saint Perpetua is one of the first Christian female writers before the fourth century whose works has survived. Although Tertullian has been suggested as the editor of the text, the editor’s identity remains uncertain.

Later, a basilica was built In Carthage over the tomb of the martyrs. An ancient inscription with the names of Perpetua and Felicitas has been found in the Basilica Maiorum.

Saint Felicity and Saint Perpetua are two of only seven women commemorated by name in the second part of the Canon of the Roman Mass.

O God the King of saints, you strengthened your servants Perpetua and Felicitas and their companions to make a good confession, staunchly resisting, for the cause of Christ, the claims of human affection, and encouraging one another in their time of trial: Grant that we who cherish their blessed memory may share their pure and steadfast faith, and win with them the palm of victory; through Jesus Christ our Lord, who lives and reigns with you and the Holy Spirit, one God, for ever and ever. Amen.