An afternoon walk in the woods and on
the green, grassy slopes of the Boyne 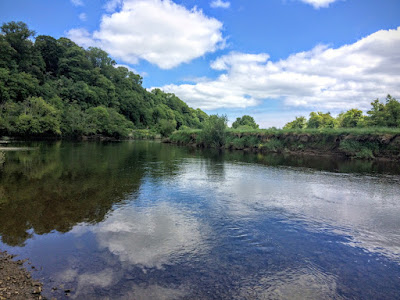 Walking on the banks of the River Boyne at Tullyallen on Saturday afternoon (Photograph: Patrick Comerford, 2015)

On my way back from the Station House Hotel, Kilmessan, and Bective Abbey, I travelled along the banks of the Boyne, through Navan and Slane, with the idea that I might have the opportunity to visit Townley Hall, about 5 km west of Drogheda.

I had stayed at Townley Hall in the early 1980s, when I was taking part in a conference organised by the Student Christian Movement. The house is a magnificent Georgian mansion built over 200 years ago and surrounded by 60 acres of rolling parkland in a beautiful and peaceful setting in Tullyallen, overlooking the Boyne Valley.

The house is one of Ireland’s architectural jewels, and I remember its beautiful interior, the wonderful proportions and its magnificent staircase. Country Life once observed: “There is mothing lovelier in the Georgian architecture of these islands than the rotunda and staircase of Townley Hall.”

In 1955, the house passed from the Townley Balfour family to a cousin, David Crichton, who sold the house and 350 ha of land in 1957 to Trinity College, Dublin for used as an agricultural school. 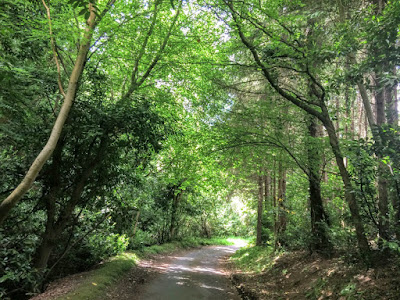 Walking in the woodlands at Townley Hall (Photograph: Patrick Comerford, 2015)

In 1967, Professor Frank Mitchell of TCD bought the house and 25 ha of surrounding land. Today, the house belongs to a secretive group known as the School of Philosophy and Economic Science, and the house and grounds are private, with and access strictly by appointment.

Unable to gain access to the house or the grounds immediately surrounding it, I enjoyed a walk through the surrounding woodlands, which are managed by Coilte Ireland.

The woodland consists mainly of broadleaves with a few scattered conifers. The wood was planted by the Balfour family some 150-200 years ago, and the main species include old oak, beech, ash, sycamore, European silver fir and Scots pine.
Other flora include blackthorn, holly, hazel, elder, ground ivy, briar and broadleaf woodland flowers. The forest is home to red deer, red and grey squirrel, badger, rabbit, hare and fox. 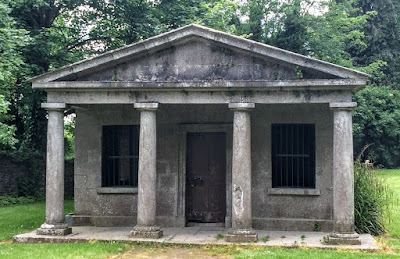 The classical-style gate lodge at the entrance to Townley Hall (Photograph: Patrick Comerford, 2015)

I returned to the classical-style gate lodge built by the Townley Balfour family before crossing the main road to walk in the afternoon summer sunshine along a short stretch of the River Boyne, which at this point marks the boundary between Co Louth and Co Meath.

It is also at the heart of the battle site of the Battle of the Boyne, the last great pitched battle fought on Irish soil between the armies of James II and William III in 1690. 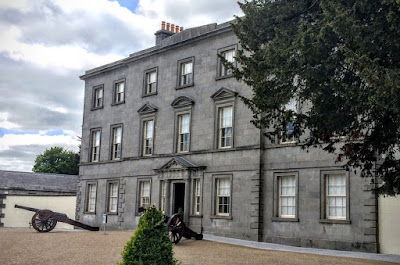 Oldbridge House … built by the Coddington family and now home to the Battle of the Boyne Visitor Centre (Photograph: Patrick Comerford)

Having failed to get access to Townley Hall, two of us opted to visit the Battle of the Boyne Visitor Centre on the other side of the river.

The centre is housed in Oldbridge House, which was built in the 1740s by John Coddington or his nephew Dixie Coddington. The Coddington family had bought the Oldbridge estate from the Moore family, Earls of Drogheda, in 1729. Oldbridge House was designed by George Darley, from a local family of architects who also renovated Dunboyne Castle and designed Dowth House and The Tholsel in Drogheda.

I knew the area well as a schoolboy, and the Coddington family closely guarded their rights to fishing in the Boyne in the face of protests until they eventually sold up and moved to Canada.

The house was almost derelict when Oldbridge and the battle site were acquired by the state in 2000.

After a guided tour of the visitor centre, we visited the walled garden and the unique octagonal garden, before having a late lunch in the Tea Pavilion behind the restored Coddington mansion. 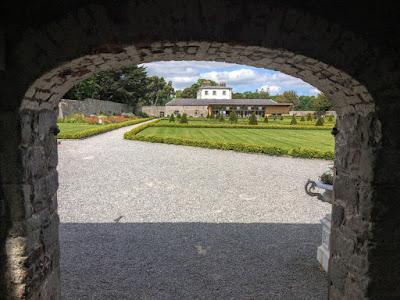 In the walled garden at Oldbridge House (Photograph: Patrick Comerford, 2015)