How many gentle flowers grow
in an English country garden? 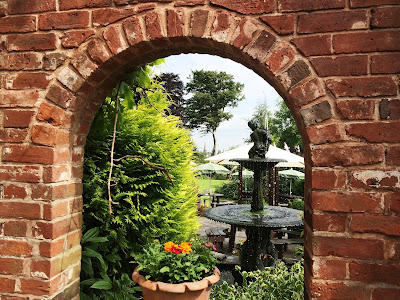 Looking out onto the garden at the Hedgehog and down toward Lichfield Cathedral (Photograph: Patrick Comerford, 2015)

I have been spending the last few days in Lichfield, with a preaching engagement in the Chapel of Saint John’s Hospital, and celebrating the anniversaries of my ordinations as deacon and priest 15 and 14 years ago.

Each day, two of us have slipped quietly in the stalls by the High Altar in Lichfield Cathedral for the mid-day Eucharist, which is normally quiet reflective with no more than ten or a dozen people present each day.

On Wednesday, we celebrated the Feast of the Birth of Saint John the Baptist; tday we were back in Ordinary Time, liturgically speaking, with green frontals and vestments.

But for me, time like this in Lichfield may be in Ordinary Time, but it is more than ordinary time and it is a very special place for me.

Today, we wandered from Leomansley Woods through Beacon Park and its gardens to the Cathedral.

Before the mid-day Eucharist, we spent a little time in Erasmus Darwin’s Herb Garden in Vicars’ Close, between the Cathedral Shop and Erasmus Darwin House on Beacon Street. 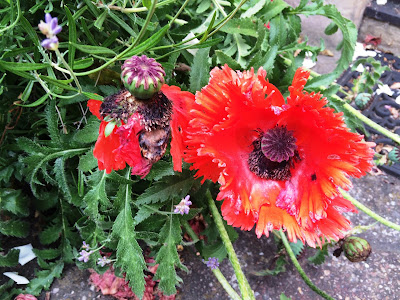 Flowers in a garden on Beacon Street this afternoon (Photograph: Patrick Comerford, 2015)

Later, we strolled up Beacon Street to the Hedgehog Vintage Inn, where we lingered over a lazy lunch in the gardens – a lunch that was extended a little longer than we expected when it was accompanied by a jug of Pimm’s.

But then, a jug of Pimm’s always adds to the feeling that summer has arrived in an English garden. 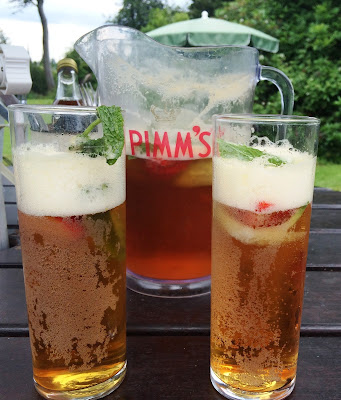 A jug of Pimm’s always adds to the feeling that summer has arrived in an English garden (Photograph: Patrick Comerford, 2015)

Because schools in England continue a lot later than school in Ireland, the summer calm was even more noticeable in the gardens of the Hedgehog this afternoon.

Below us, we could see the three spires of Lichfield Cathedral rising above the house tops of the city. The warmth of the summer sunshine and the stillness of the garden were going to be savoured a little longer.

Jimmie Rodgers recorded the popular folk song In an English Country Garden in 1962. In the half century since then, it has become part of the staple diet of Morris dancers, banjo players, and school orchestras throughout England, and the lyrics paint a colourful image, from the flowers to the wildlife that visit English gardens.

Walking back down Stafford Road and Beacon Street this afternoon, I was aware of how an English garden is a matter of culture and pride, and not just in the countryside.

The gardens were rich with roses, rhododendrons, lupines, dahlias, foxgloves, ladies bonnets, fuchsias, irises, lavender, proud lilies, tamed poppies in every variety … and there was every shade and mixture of blue, purple, red, orange, yellow, green … and more. 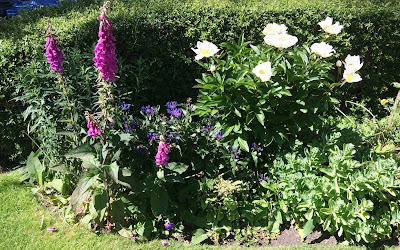 There is a feeling of being in an English country garden in Lombard Gardens in Lichfield (Photograph: Patrick Comerford, 2015)

On Wednesday, there were similar delights and unexpected pleasures when I stumbled for the first time into Lombard Gardens. This hidden terrace of Georgian houses is in the heart of Lichfield, off Lombard Street, but with its “country garden” feel it could be miles outside in the countryside.

I got out into the countryside for long walks on Wednesday afternoon, when I went to the tiny village of Wall south of Lichfield, and its excavated site of Roman ruins.

Once again, I had a long and lingering lunch – this time on the terrace of The Trooper. Although we would catch a glimpse and of traffic on the motorway nearby and hear its muffled roars, it was a pleasant afternoon in the countryside and in the summer sunshine.

Later, we strolled through the countryside, under the motorway and along the lanes that led us through tiny Chesterfield. The village may have appeared sleepy, but the fields were busy and the farmers were working in the heat of the afternoon sunshine.

Each farmhouse and country cottage had an English country garden, and the sights and smells of the countryside were enthralling until we arrived at Shenstone and caught the train back to Lichfield, in time to preach in Saint John’s. 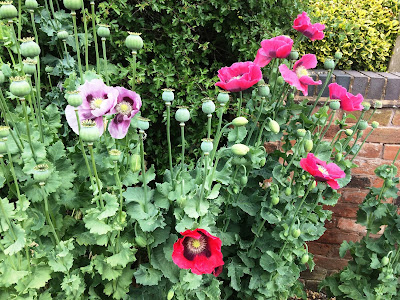 The Bishop’s Lodging has survived until
now … but can it continue to survive?

The Friary in Lichfield … from Franciscan Friary to private house, to school, to library (Photograph: Patrick Comerford, 2015)

I am staying this week on Swan Road in Lichfield, close to the Friary, the Library and the site of the former Franciscan Friary.

The Franciscans were founded by Saint Francis of Assisi in 1209, and within a generation, they had founded a Friary in Lichfield in 1237. Alexander de Stavenby (1224-1238), Bishop of Lichfield, made the foundation of the Friary possible when he granted the friars “certain free burgages in the town for them to set their house on.”

The Friary was destroyed in a large fire that raged through Lichfield in 1291. But it was quickly rebuilt thanks to the generosity of the people of Lichfield. In time, the Franciscans were known as the Grey Friars because of the colour of their habits.

When John Comberford of Comberford died in 1414, his bequests included 10 shillings for masses to the Franciscan mendicant friary in Lichfield. With generous bequests and increasing wealth, the simple timber structures in the Friary in Lichfield were replaced by large sandstone buildings standing on a site of over 12 acres. The nave of the large church measured 110 ft x 60 ft, the chancel 95 ft x 28 ft and the cloister 80 ft square.

At the dissolution of the monastic houses in 1538, most the Friary buildings, including the church, cloisters, refectory and most of the domestic buildings, were demolished, and the site was cleared and sold for £68 to George Stonyng, Master of the Guild of Saint Mary and Saint John, which had been the effective civic government of Lichfield. 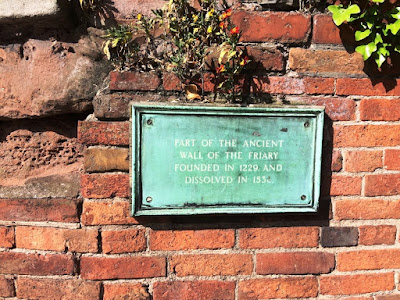 Apart from some of the walls, the only buildings to survive were the Dormitory on the west range and a house known as ‘Bishop’s Lodging’ in the south-west corner of the 10.5 acre estate of the former site.

In 1545, Stonyng remodelled the remaining Friary buildings for his own domestic use, and built a brick house on part of the site of the mediaeval friary.

Over the next four centuries, the buildings were bought and sold to different people. Gregory Stonyng was one of the first two bailiffs of the new Lichfield corporation in 1548-1549.The Friary estate was inherited by his son Edward, who died in 1611. But Edward’s son Henry sold the estate to Thomas Clayton, and then passed through the Hill and Johnson families.

Tenants in the 18th century included Michael Rawlins, a former town clerk, and Thomas Cobb, political agent for Lord Anson and Lord Gower. Mrs Cobb and her niece, friends of Samuel Johnson, who often visited them. William Inge of Thorpe Constantine, a magistrate for both Lichfield and Staffordshire, lived here later in the 18th century and carried out many improvements.

In 1891, the trustees of Richard Johnson’s charity sold the 11½ acre estate to the tenant John Godfrey-Fausett. When he died, it was sold to Harry Tichborne Hinckes of Tettenhall, and it was then sold in turn to Colonel Henry Williams and Sir Richard Ashmole Cooper, MP for Walsall.

The Cooper family business is noted for the invention of insecticides related to veterinary products and the Sheep Dip. Sir Richard's son, Sir William Cooper, once boasted: “Our family solved Australia’s economy overnight.”

In 1920, Cooper gave the 11 acre estate to the city for the purpose of developing the area and laying out a new road. Bird Street and Bore Street had become congested with traffic and the west side of Lichfield was still under-developed.

The new Friary Girls’ School was built in 1921, and incorporated the building known as the Bishop’s Lodging on the south west of the building. The school was designed around the existing buildings in 1921-1928 by GC Lowbridge, the Staffordshire County Architect.

The road named ‘The Friary’ was built across the Friary site in 1928 (Photograph: Patrick Comerford, 2015)

In 1928 the road named The Friary was built across the former Friary site. The new road called for the relocation of the clock tower, the demolition of buildings on the south side of Saint John Street and the demolition of much of the west range of the remaining buildings from the original Friary. 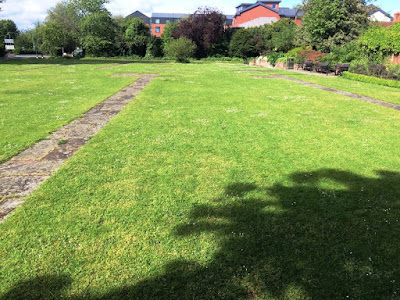 The Friary site was marked out after intervention by Thomas Moseley (Photograph: Patrick Comerford, 2015)

The former church site of the Friary was threatened with development in 1933. However, Councillor Thomas Moseley secured permission to carry out an archaeological excavation. The dig revealed the extent and layout of the ruins of the Friary. The site was eventually designated a Scheduled Ancient Monument, stopping any danger of development. 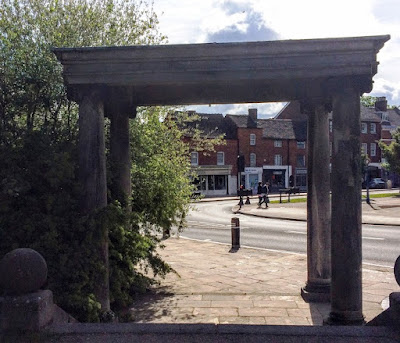 The classical style portico framing the entrance to the excavated ruins came from Shenstone Court in 1937 (Photograph: Patrick Comerford, 2015)

The site is now a public garden and slabs set in the grassy ground show the layout of the walls of the cloister, as well as parts of the north wall of the nave. A classical style portico was erected in 1937 to frame the entrance to the excavated ruins. The portico came from Sir Richard Cooper’s home at Shenstone Court.

The Friary School moved to the north side of Lichfield in 1975, and the former school building now serves as Lichfield Library.

At the present library, a window to the right of the entrance has an ex-situ gravestone found in 1746 but dating from the 14th century or earlier with a Calvary cross fleury and a worn inscription to Richard the Merchant.

The entrance hall of the Library also has a ceramic mosaic panel depicting a bull’s head – this was rebuilt on a smaller scale, and was originally a stall riser in a butcher’s shop in Tamworth Street.

A surviving stone fireplace from the Tudor buildings can be seen in the children’s library. This elaborate fireplace, ornamented with Gregory Stonyng’s name, is decorated with blue and white 17th or 18th century Dutch tiles. The tiles, which are somewhat battered, show street and working scenes, mainly centred on a single figure. 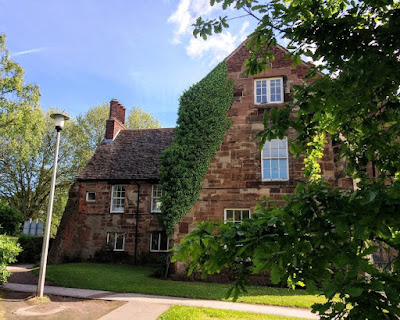 The Bishop’s Lodging is the only remaining part of the original Friary to survive since the dissolution (Photograph: Patrick Comerford, 2015)

The house is presumably “the inn called le Bishop’s Lodging or le Great Chamber,” which was used by the friars as a guest house and included in the sale to Gregory Stonynge in 1544.

The Bishop’s Lodging is built of sandstone, probably in the early 16th century. The house, together with the south end of the west range of the Library, is L-shaped with a wing on the west.

However, local historians and local community groups are concerned that the integrity of the Bishop’s Lodging can survive the development known as the Chapter House, which was announced in Lichfield some months ago [19 March 2015].

This development of apartments in the grounds of the former friary, surrounded by landscaped gardens, is being developed by Pegasus Life as retirement housing for people approaching or enjoying retirement.

The development work on the site has already started. The developers promise to preserve some of Lichfield’s important historical heritage and say Chapter House will include 38 apartments in a new building with a design inspired by the Franciscan friary.

They say Monks’ Walk Garden – adjacent to the site – will also be protected as part of the plans. The green space, which includes nature areas and provides a teaching facility for local schools, will be preserved as a community area open to all. They also plan to restore the Bishop’s Lodging and to convert it into further apartments.

Whether the Bishop’s Lodging can be conserved and converted remains to be seen. 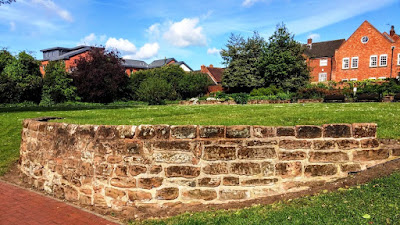