A mixture of sunshine and rain
with Saint Swithun’s successor 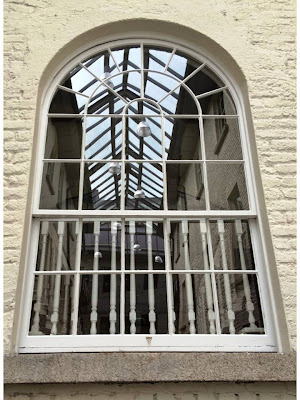 All glass and mirrors? ... in the Silk Road Café in Dublin Castle this afternoon (Photograph: Patrick Comerford, 2014)

Winchester Cathedral
You’re bringing me down
You stood and you watched as
My baby left town.

You could have done something
But you didn’t try
You didn’t do nothing
You let her walk by.

It was good to be back in Christ Church Cathedral, Dublin, for the Cathedral Eucharist this morning [25 May 2014], after a few weeks absence.

I was last in the cathedral on a Sunday morning a month ago [27 April 2014], and have spent Sundays since then on Achill Island, in Zion Parish, Rathgar, and taking part in a residential weekend with part-time MTh students.

I sat in the chapter stalls this morning, happy to be fed spiritually in word and sacrament. The Revd Garth Bunting presided, Canon Mark Gardiner preached as the canon-in-residence and the setting sung by the Cathedral Choir was Missa Bell’ amfitrit’ altera by Orlande de Lassus (1534-1594).

Lassus was a Dutch or Franco-Flemish composer of the late Renaissance, from present-day Belgium. Today he is regarded as the principal representative of the mature polyphonic style of the Franco-Flemish school, and one of the three most famous and influential musicians in late 16th century Europe, alongside Palestrina and Victoria.

Later, two of us went to lunch in the Silk Road Café at the Chester Beatty Library in Dublin Castle with an old friend, Bishop Tim Dakin of Winchester and his wife, the Revd Sally Dakin, after bringing them on a tour of the cathedral and the cathedral crypt.

Timothy John Dakin was born in 1958 in East Africa, where his parents were church missionaries working in Tanzania and Kenya. In our conversations this afternoon, we shared memories of shared friends from the present and the past, and also explored some interesting connections, for his father was ordained deacon and priest in Lichfield Cathedral.

The future bishop was Principal of Carlile College, the Church Army college in Nairobi, from 1993 to 2000, and an assistant curate at All Saints’ Cathedral, Nairobi, before being appointed General Secretary of CMS in 2000. Two years later, I joined the staff of CMS Ireland.

While he was working with CMS, he was also an associate priest in the parish of Ruscombe and Twyford in the Diocese of Oxford and an Honorary Canon Theologian of Coventry Cathedral.

He was appointed Bishop of Winchester on 6 September 2011, he was consecrated in Saint Paul’s Cathedral, London, on 25 January 2012, and was enthroned in Winchester Cathedral was on 21 April.

The Revd Sally Dakin is a priest in the Parish of Saint Barnabas in Reading. Sally and Tim Dakin have two adult children, Anna and Johnny. 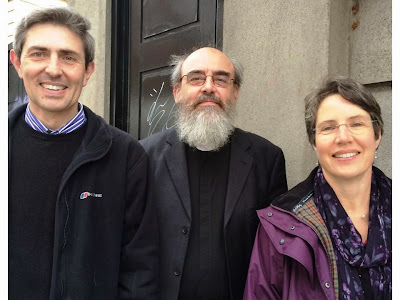 With Bishop Tim Dakin and the Revd Sally Dakin outside the Deanery at Christ Church Cathedral, Dublin, this evening (Photograph: Barbara Comerford, 2014)

By early afternoon, there was no sign of the threatened rain, and from the Silk Road Café and Christ Church Cathedral we headed to north Co Dublin, stopping briefly in Rush to look at the abandoned portico of Kenure House.

It was a perfect Sunday afternoon for cricket in Rush, and by the time we got to Skerries the place was basking in unexpected sunshine. Summer was returning this afternoon to Skerries, which was hosting a street festival and a cycling race.

We parked on Red Island, and we walked around the harbour, where there was an exceptionally low tide. Last Sunday, Skerries was soaking in heavy, winter-like rain.

We sat for a short time in the sunshine at Stoop Your Head on the Harbour. All along the harbour front, people were enjoying the unexpected sunshine, flowing from the bars and restaurants onto the street.

Later, we stepped in behind the Sailing Club, and strolled along the length of the South Strand. By the time we got back to Christ Church Cathedral late in the evening the bright sunshine had disappeared and the rain had returned.

Bishop Tim is a successor to Saint Swithun, who was Bishop of Winchester and later became patron saint of Winchester Cathedral. He died ca 862, but his historical significance as a bishop is overshadowed by his association with the tradition that the weather on his feast day (15 July) will continue for 40 days.

If on St Swithun’s day it really pours
You’re better off to stay indoors.

Perhaps that’s why Geoff Stephens and John Carter felt let down by Winchester Cathedral almost half a century ago. I wonder what happens if we have weather like today’s on Saint Swithun’s Day … sunshine or rain?

Posted by Patrick Comerford at 22:01 No comments: