The site of the Great Synagogue at No 11 Old Jewry, in the heart of the mediaeval Jewish area in London (Photograph: Patrick Comerford, 2022)

During a working day in London last week, I returned to Old Jewry, a one-way street in the City of London that runs from Poultry to Gresham Street, close to Bank underground station and Cannon Street mainline station.

The street now houses mainly offices for banks and financial companies, but it was once at the heart of the original Jewish settlement in London, sometimes described as a ‘ghetto’.

A City Plaque in the street called Old Jewry marks the site where the Great Synagogue of London stood until 1271.

Soon after the Norman Conquest, William the Conqueror encouraged Jews to come to England. Some settled in cities throughout England, including London, Lincoln, Oxford and York.

According to the Revd Moses Margoliouth, Old Jewry was a ghetto. However, the English word ghetto does not arise until the 16th century and is derived from the Jewish ghetto in Venice. The Ghetto in Venice was instituted in 1516 when the Doge Leonardo Loredan and the Senate issued a decree forcing Jews to live in a designated area in Cannaregio.

William the Conqueror brought the first Jews to England as ‘feudal Jews’ to be royal serfs, providing him with financial services and income. Those Jews probably arrived in England in the 1070s. At first, they came to England in small numbers, but many more arrived from Rouen in the decades that followed, fleeing the pogrom in 1096 in Rouen, once an important centre of Jewish life in Northern France.

The Jews in mediaeval London settled in an area of the City between Old Jewry and Lothbury. It seems richer Jews lived around Old Jewry because the land was more valuable being near the market at Cheapside – known then as Westcheap. Jews also lived in other parts of the City and in Southwark. The first documented reference to a Jewish quarter in London only comes ca 1127.

The rights of Jews of London were proclaimed in the Statutum de judaismo issued by Henry I. Under this ‘Jewish Charter,’ the Jewish population of London was guaranteed ‘liberty of movement throughout the country, relief from ordinary tolls, protection from misuse, free recourse to royal justice and responsibility to no other, permission to retain land pledged as security, and special provision to ensure fair trial.’

They followed a variety of professions, with doctors, workers in metals, goldsmiths and in trades not controlled by the guild system.

When the Jews were living in the City, the street was known as ‘The Jewry’. In his Dictionary of London, Harben gives 1181 as the earliest recorded date for the name. The street was not called ‘Old Jewry’ until after the Jews were forced to leave at a later date.

A blue plaque marks the site of the Great Synagogue in Old Jewry in London (Photographs: Patrick Comerford, 2022)

Research has found the sites of at least five synagogues in the area, including the synagogue in Old Jewry that was known as the ‘Great Synagogue’.

By the end of the 12th century, life in London was generally a good one for the flourishing Jewish community. However, in 1187 Jerusalem fell to Saladin and Christians rallied to reclaim the Holy City.

Old Jewry provided a safe haven for Jewish financiers and their families. But the Jewish community’s seclusion within the streets of Old Jewry only worsened their obscurity, a factor that contributed to a disdain for Jews.

Gradually, antisemitic feelings began to rise in London and throughout England. When the English Barons took London in 1215, they imposed so many restrictions on Jews that some died and many more fled.

Edward I issued a statute in 1275 that ended official Jewish usury and many Jewish financiers lost their livelihoods. In 1278, Jews were accused of ‘coin clipping’ – an act of clipping small pieces from the coins which were all made of gold and melting it down for profit. Many Jews were executed for this spurious offence.

Edward I issued an edict on 18 July 1290 expelling all Jews from England. They were to leave by All Saints’ Day 1 November 1290. The edict was not overturned until the time of the Protectorate – more than 350 years later – when Oliver Cromwell permitted Jews to return to England in 1657.

The City Plaque on the wall in Old Jewry is one of the few records of the way of life of the Jews in London in the 11th to the 13th centuries. None of the Jews’ houses exist today, although many of them were substantial stone structures.

Jewen Street off Aldersgate, which still existed in 1722, was the only permitted burial ground for Jews in London. In 2001, archaeologists also found a mikveh or ritual bath near to Old Jewry, on the corner of Gresham Street and Milk Street, under what is now the State Bank of India. It would have fallen into disuse after 1290, when the Jews were expelled from England.

The original Jewish residents of Old Jewry and the surrounding streets are remembered in the names of two nearby churches: Saint Olave Old Jewry, of which only the tower survives; and Saint Lawrence Jewry, on Gresham Street, next to the Guildhall, rebuilt by Sir Christopher Wren after the Great Fire in 1666,

Old Jewry in the heart of the mediaeval Jewish quarter in London runs from Poultry to Gresham Street (Photograph: Patrick Comerford, 2022) 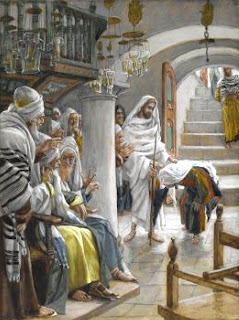 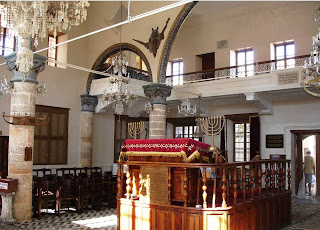 The Kahal Shalom Synagogue, with the women’s gallery behind and above the tevah (Photograph: RhodesPrivateTours.com)

A plaque marking the site of Saint Benet Sherehog Church on the corner of Sise Lane and Pancras Lane (Photograph: Patrick Comerford, 2022)

Saint Benet Sherehog Church, first dedicated to Saint Osyth, was a mediaeval parish church built before 1111, on a site now occupied by No 1 Poultry in Cordwainer Ward. This was once the wool-dealing district of the City of London, and a ‘shere hog’ is a castrated ram after its first shearing.

The church was originally dedicated to Saint Osyth. Sise Lane in the parish uses an abbreviated form of the saint’s name. The historian John Stow believed that the later dedication of Saint Benet Sherehog was derived from a corruption of the name of Bennet Shorne, a benefactor of the church in the reign of Edward II.

The patronage of the church belonged to the monastery of Saint Mary Overy until the Dissolution, when it passed to the Crown.

Matthew Griffith, chaplain to Charles I, was the rector from 1640 until 1642. He was removed from the post and imprisoned after preaching a sermon, ‘A Pathetical Persuasion to Pray for Publick Peace,’ in Saint Paul’s Cathedral.

Saint Benet’s was one of the 86 parish churches destroyed in the Great Fire of London. It was not selected to be rebuilt when the 1670 Act of Parliament became law. The parish was united to Saint Stephen Walbrook that year, but continued to be represented by its own churchwarden. However, for almost 200 years, the arrangement continued to cause tensions.

The church site was used as a burial-ground for the united parishes until closed by an Act of Parliament in 1853. It was excavated in 1994-1996 before the current office block was erected.

The burials in the churchyard included the poet and woman of letters Katherine (Fowler) Philips (1632-1664), also known as ‘The Matchless Orinda.’ She achieved renown as a translator of Pierre Corneille’s Pompée and Horace, and for her editions of poetry after her death.

Katherine Philips was born in London, the daughter of John Fowler, a Presbyterian cloth merchant. As a child, she had a strong memory and was intellectually advanced, and it is said she could read the Bible before the age of four.

Katherine Philips broke with Presbyterian traditions she became a member of the Church of England and an ardent admirer of King Charles I. In 1647, when she was 16, she married a Welsh Parliamentarian James Philipps, once said to have been 54 on their wedding day – in fact, he was only 24.

They were the parents of two children, including a son Hector who died in infancy in 1655 and was buried at Saint Benet Sherehog. Hector’s death was the subject of some of her later poems, including ‘Epitaph on Hector Philips’ and ‘On the Death of my First and Dearest Childe.’

She went to Dublin in 1662 to pursue her husband’s claim to Irish estates. In Dublin, she completed a translation of Pierre Corneille’s Pompée, produced with great success in 1663 in the Smock Alley Theatre, and printed that year in both Dublin and London, under the title Pompey.

She travelled back to London in 1664 with a nearly completed translation of Corneille’s Horace, but died of smallpox. She was buried in the church of Saint Benet Sherehog, just two years before it was destroyed in the Great Fire of London.

The site of Saint Benet Sherehog Church on the corner of Sise Lane and Pancras Lane (Photograph: Patrick Comerford, 2022)

The theme in the USPG Prayer Diary this week is ‘Theology in Korea.’ This theme was introduced yesterday.

The USPG Prayer Diary invites us to pray today (United Nations Day) in these words:

We give thanks for the United Nations and the work it does to foster international co-operation on difficult issues like trade and conflict. 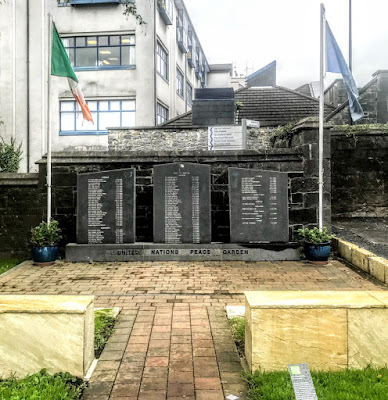